New data released last month by the Foundation for Alcohol Research and Education (FARE), showed that one-in-five Australians have purchased more alcohol than usual during the COVID-19 pandemic. This mother of two explains her own struggle with sobriety after battling alcohol addiction for nearly three decades.

The pandemic and isolation has been the most difficult hurdle I have had to overcome in my own journey of sobriety. After more than five years without a drink, I was suddenly craving it. Friends in recovery reported they were struggling just as I was as we were filled with anxiety about what was unfolding around us. On top of this, the usual support networks were gone — counselling appointments, 12 step meetings and the like. The cravings were intense and my strength to stay sober was dwindling as my stress levels soared and I noticed nearly everyone around me was using alcohol as a way of coping with the very same feelings I was experiencing. ‘Well if things turn bad, why not?’

During the first weeks of the crisis, I noticed more and more posts on social media from friends who were buying up alcohol supplies and openly commenting on using a drink to relieve their stress and concerns around what was unfolding. Immediately I began to speak to friends about the impact this crisis could have on those who already rely on alcohol to relax and even for those who currently identified as social drinkers. Working from home and not having to face up to work the next day means you can get away with being a little weary from having a few extra drinks the night before. Home schooling means no drop offs or pick ups so what’s to say you can’t open that bottle of wine at 3pm instead of 6pm? In fact, what’s to stop you having a wine with your lunch if you wanted to?

Australians’ love affair with alcohol has created a widespread acceptance of what is often excessive drinking, leading us to believe that problem drinking and addiction only affects others — a minority — despite its devastating impact on family violence, road trauma and health.

Most concerning to me was when our school term resumed with remote learning in place. At the end of the first day back, a post appeared on our school’s official Facebook page. A parent holding a glass of wine with the caption, ‘need I say more?’. Post after post followed from parents celebrating the end of their first day of remote learning by having a drink. The comments that ensued were disturbing with some parents stating they had ‘had to pour one at 12pm just to get through the afternoon’ and others commenting on how this - alcohol - was their new medicine. One parent exclaimed ‘we got this and if we don’t, we’ve got alcohol!’ There were jokes about the teachers (parents) having to drink in their wardrobes and that they would be teaching their children the time based on what type of drink they were consuming, while others commented asking ‘where’s the straw?’ and ‘red, white and brown cordial are all needed tonight’. While all these comments were intended as jokes, I found these posts heartbreaking.

I am only too aware of the devastation alcohol abuse can cause...

Australia’s already problematic relationship with alcohol was being treated as a joke and as is always the case, condoned by the majority. When I objected to some material, it was just suggested to me I should scroll past if I didn’t want to participate in the thread.

With the enormous amount of alcohol related harms recorded in Australia each year and an estimated 4,000 deaths, isolation due to the COVID-19 pandemic threatens to see these numbers increase. Reports of stockpiling of alcohol amid the wave of panic buying at the beginning of the crisis were alarming to say the least. With people out of work or working from home and children undertaking remote learning, the increased consumption of alcohol poses yet another health crisis beyond the current pandemic. Kids and I celebrated my 5th year sober on January 1 this year.
Supplied

As someone who battled alcohol addiction for nearly three decades, the looming isolation immediately raised red flags. So I shared my struggle on my social media page and was inundated with comments and messages reminding me of exactly ‘why not’ and how far I had come in this journey so far. I was grateful for the support I received via social media and relieved I admitted I was struggling because without those things, it would have been too easy to pick up a drink.

I am only too aware of the devastation alcohol abuse can cause and our society’s willingness to accept and normalise excessive drinking is only compounding what is already at epidemic levels. I encourage everyone to be aware of your behaviours and how they impact not only your health and wellbeing but how they will shape the way your children think. Lead by example and show your children how to cope in times of high anxiety by dealing with things in ways other than reaching for a drink. 'Four years ago I hit rock bottom and was ready to take my own life.' 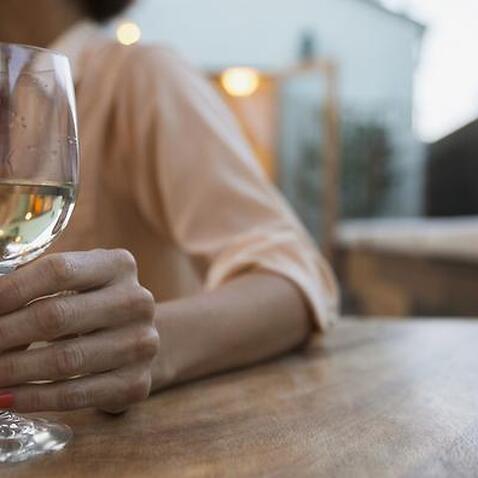