Preview Above: Do some vegans care more about animals' lives than human lives? Meet vegan activist Joey Carbstrong on SBS On Demand.

The ethics of eating red meat have been grilled by critics who question its consequences for environmental health and animal welfare. But if you want to minimise animal suffering and promote more sustainable agriculture, adopting a vegetarian diet might be the worst possible thing you could do.

Renowned ethicist Peter Singer says if there is a range of ways of feeding ourselves, we should choose the way that causes the least unnecessary harm to animals. Most animal rights advocates say this means we should eat plants rather than animals.

It takes somewhere between two to ten kilos of plants, depending on the type of plants involved, to produce one kilo of animal. Given the limited amount of productive land in the world, it would seem to some to make more sense to focus our culinary attentions on plants, because we would arguably get more energy per hectare for human consumption. Theoretically this should also mean fewer sentient animals would be killed to feed the ravenous appetites of ever more humans.

But before scratching rangelands-produced red meat off the “good to eat” list for ethical or environmental reasons, let’s test these presumptions.

Figures published in 2011 suggest that, in Australia, producing wheat and other grains results in:

How is this possible?

Agriculture to produce wheat, rice and pulses requires clear-felling native vegetation. That act alone results in the deaths of thousands of Australian animals and plants per hectare. Since Europeans arrived on this continent we have lost more than half of Australia’s unique native vegetation, mostly to increase production of monocultures of introduced species for human consumption.

Most of Australia’s arable land is already in use. If more Australians want their nutritional needs to be met by plants, our arable land will need to be even more intensely farmed. This will require a net increase in the use of fertilisers, herbicides, pesticides and other threats to biodiversity and environmental health. Or, if existing laws are changed, more native vegetation could be cleared for agriculture (an area the size of Victoria plus Tasmania would be needed to produce the additional amount of plant-based food required).

Most cattle slaughtered in Australia feed solely on pasture. This is usually rangelands, which constitute about 70 per cent of the continent.

Grazing occurs on primarily native ecosystems. These have and maintain far higher levels of native biodiversity than croplands. The rangelands can’t be used to produce crops, so production of meat here doesn’t limit production of plant foods. Grazing is the only way humans can get substantial nutrients from 70 per cent of the continent.

In some cases rangelands have been substantially altered to increase the percentage of stock-friendly plants. Grazing can also cause significant damage such as soil loss and erosion. But it doesn’t result in the native ecosystem “blitzkrieg” required to grow crops. 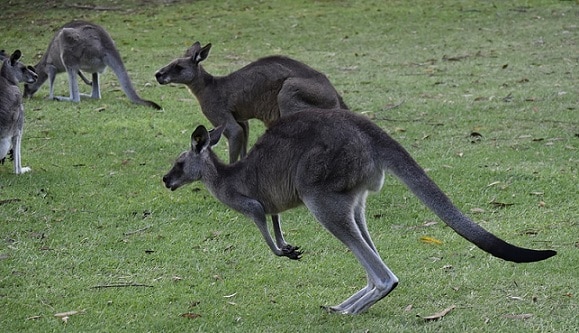 Eating sustainably, wild-harvested kangaroo is good for the environment.
Pixabay

In Australia 70 per cent of the beef produced for human consumption comes from animals raised on grazing lands with very little or no grain supplements. At any time, only 2 per cent of Australia’s national herd of cattle are eating grains in feed lots; the other 98 per cent are raised on and feeding on grass. Two-thirds of cattle slaughtered in Australia feed solely on pasture.

To produce protein from grazing beef, cattle are killed. One death delivers (on average, across Australia’s grazing lands) a carcass of about 288 kilograms. This is approximately 68 per cent boneless meat which, at 23 per cent protein equals 45kg of protein per animal killed. This means 2.2 animals killed for each 100kg of useable animal protein produced.

Producing protein from wheat means ploughing pasture land and planting it with seed. Anyone who has sat on a ploughing tractor knows the predatory birds that follow you all day are not there because they have nothing better to do. Ploughing and harvesting kill small mammals, snakes, lizards and other animals in vast numbers. In addition, millions of mice are poisoned in grain storage facilities every year.

However, the largest and best-researched loss of sentient life is the poisoning of mice during plagues.

Each area of grain production in Australia has a mouse plague on average every four years, with 500-1000 mice per hectare. Poisoning kills at least 80 per cent of the mice.

At least 100 mice are killed per hectare per year (500/4 × 0.8) to grow grain. Average yields are about 1.4 tonnes of wheat/hectare; 13 per cent of the wheat is useable protein. Therefore, at least 55 sentient animals die to produce 100kg of useable plant protein: 25 times more than for the same amount of rangelands beef.

Some of this grain is used to “finish” beef cattle in feed lots (some is food for dairy cattle, pigs and poultry), but it is still the case that many more sentient lives are sacrificed to produce useable protein from grains than from rangelands cattle. There is a further issue to consider here: the question of sentience – the capacity to feel, perceive or be conscious.

You might not think the billions of insects and spiders killed by grain production are sentient, though they perceive and respond to the world around them. You may dismiss snakes and lizards as cold-blooded creatures incapable of sentience, though they form pair bonds and care for their young. But what about mice?

Mice are far more sentient than we thought. They sing complex, personalised love songs to each other that get more complex over time. Singing of any kind is a rare behaviour among mammals, previously known only to occur in whales, bats and humans.

Girl mice, like swooning human teenagers, try to get close to a skilled crooner. Now researchers are trying to determine whether song innovations are genetically programmed or or whether mice learn to vary their songs as they mature.

Baby mice left in the nest sing to their mothers — a kind of crying song to call them back. For every female killed by the poisons we administer, on average five to six totally dependent baby mice will, despite singing their hearts out to call their mothers back home, inevitably die of starvation, dehydration or predation.

When cattle, kangaroos and other meat animals are harvested they are killed instantly. Mice die a slow and very painful death from poisons. From a welfare point of view, these methods are among the least acceptable modes of killing. Although joeys are sometimes killed or left to fend for themselves, only 30 per cent of kangaroos shot are females, only some of which will have young (the industry’s code of practice says shooters should avoid shooting females with dependent young). However, many times this number of dependent baby mice are left to die when we deliberately poison their mothers by the millions.

Most of these animals sing love songs to each other, until we inhumanely mass-slaughter them.

So, what does a hungry human do? Our teeth and digestive system are adapted for omnivory. But we are now challenged to think about philosophical issues. We worry about the ethics involved in killing grazing animals and wonder if there are other more humane ways of obtaining adequate nutrients.

Relying on grains and pulses brings destruction of native ecosystems, significant threats to native species and at least 25 times more deaths of sentient animals per kilogram of food. Most of these animals sing love songs to each other, until we inhumanely mass-slaughter them.

Former Justice of the High Court, the Hon. Michael Kirby, wrote that:

“In our shared sentience, human beings are intimately connected with other animals. Endowed with reason and speech, we are uniquely empowered to make ethical decisions and to unite for social change on behalf of others that have no voice. Exploited animals cannot protest about their treatment or demand a better life. They are entirely at our mercy. So every decision of animal welfare, whether in Parliament or the supermarket, presents us with a profound test of moral character”.

We now know the mice have a voice, but we haven’t been listening.

The challenge for the ethical eater is to choose the diet that causes the least deaths and environmental damage. There would appear to be far more ethical support for an omnivorous diet that includes rangeland-grown red meat and even more support for one that includes sustainably wild-harvested kangaroo.

This article was originally published by The Conversation in 2011.

Editor’s note: since this article was published in 2011 its data have been disputed. A 2018 paper in the Journal of Agricultural and Environmental Ethics found this article: