A study has found wage theft is "veering into modern slavery" when it comes to Australia's international students. As part of a series of reports, SBS News speaks to one student who is being underpaid. 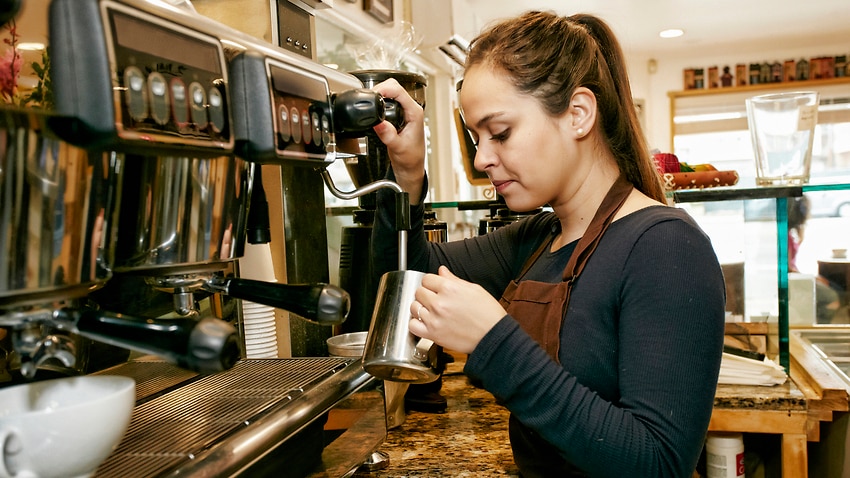 Carolina* (not pictured) is only being paid $11 an hour. Source: (Stock photo) Getty

For Carolina*, who is from Honduras, Australia seemed like an ideal place to learn, explore and work.

But she soon found it wasn’t all she expected.

"My hope is to leave this job because every time I remember that they've taken advantage of me, it annoys me," she told SBS News.

Carolina, who is in her 20s, has worked at a cafe-restaurant in Sydney for almost 18 months as a barista and waitress while studying leadership and management at SELC Australia college.

Even before COVID-19 hit, Carolina was being paid just $20 an hour, which is below the minimum wage. When the business suffered during the pandemic, her wage plummeted to $11 an hour.

She was told she was paid "$11 because the sales weren't very high. So they told me that's all they could offer".

"If I didn't accept, they made me understand they'd let me go," she said.

Carolina's story isn't an isolated one.

The study, International Students and Wage Theft in Australia, surveyed more than 5,000 international students across Australia between 9 April and 30 May 2019.

It found more than three quarters (77 per cent) were paid below the minimum casual hourly wage and 26 per cent earned only $12 or less an hour, something most prevalent among Chinese respondents.

Almost two-thirds of respondents didn’t try to access help, 48 per cent said this was because they feared losing their job and 38 per cent said they didn’t want anything to jeopardise their visa.

More than three quarters of international students are being paid below the minimum wage according to one study. Source: Getty Images

"It's really up to the government to make sure that employers are doing the right thing and to give students the message that they're not breaking the law and they are not at fault if their employer underpays them, it's the employer's responsibility to pay them correctly."

It's also why Carolina doesn't want to be identified.

"I don't know if I need a lawyer, I don't know to what lengths it'll go to, if it will affect my visa, so a lot of the time the most comfortable position is to stay quiet because you don't know what to expect if you say something."

The authors of the study say the tendency among international students not to speak up or report their employer sets up an environment where businesses feel they can get away with wage theft.

"When you have an exceptionally vulnerable cohort who don't have support and employers who are willing to act unscrupulously to exploit that, we definitely see the end of this veering into modern slavery," Associate Professor Farbenblum said.

As international students are ineligible for federal government support payments - except for being able to access some of their superannuation last financial year - she says many will be vulnerable to exploitation due to their desperate need to work among an already tight labour market.

It's something that is only going to get worse amid the impacts of COVID-19, they say.

“We're going to see a perfect storm for increased exploitation as the labour market reopens, we're going to see increased employer impunity as international students are very fearful of coming forward because they don't want to lose their jobs in a market where jobs are scarce.”

The study calls for the 40-hour a fortnight cap on the employment of international students to be scrapped and the creation of a wage claims tribunal. It also says a "firewall" blocking information passing between the Fair Work Ombudsman and Department of Home Affairs would increase the likelihood of students reporting exploitation in the workplace.

"The government has been tinkering around the edges and that clearly hasn't been working. We need strong and effective and deep reforms to our labour enforcement,"  Associate Professor Farbenblum said.

"It's close to impossible for most temporary migrants to ever get the wages back that they're owed and so there's no real benefit to them risking their visa to come forward and report."

The government says it has no plans to change the 40-hour limit.

A spokeswoman for Acting Immigration Minister Alan Tudge said: "Students come here to study and their rights and obligations are very clearly stated. There are no plans to change these rules."

"Worker exploitation is illegal. Employers are required to abide by all relevant Australian workplace laws. If they are breaching these laws, they should be reported."

Employers doing the wrong thing can be reported anonymously at fairwork.gov.au.

One person who knows the issue better than most is the former chair of the Migrant Workers' Taskforce, Professor Allan Fels.

Professor Fels says the sooner jail sentences for deliberate underpayers are brought in, the better.

"Action now is more important than ever. Coronavirus has made the problem worse there's more pressure on employers not to pay fully and students are more exploitable," he said.

Industrial Relations Minister Christian Porter said: "the government continues to progress the recommendations of the Report of the Migrant Workers’ Taskforce".

"Proposals to introduce new penalties for the worst forms of worker underpayment are being progressed as part of the Compliance and Enforcement Working Group – part of the Government’s Industrial Relations Reform working group process – which had a productive first meeting last week," he said.

"We don't want to see that occurring in Australia, it's why we've resourced the Fair Work Ombudsman to clamp down on any exploitation of workers," he said.

Carolina wants to encourage other international students to come forward.

"I'd like to tell them not to let yourself get taken advantage of and say 'no'."

The Migrant Worker Justice Initiative wants to get a better picture of the challenges facing temporary migrants in Australia during COVID-19 and is asking those interested to join their nationwide survey at mwji.org.