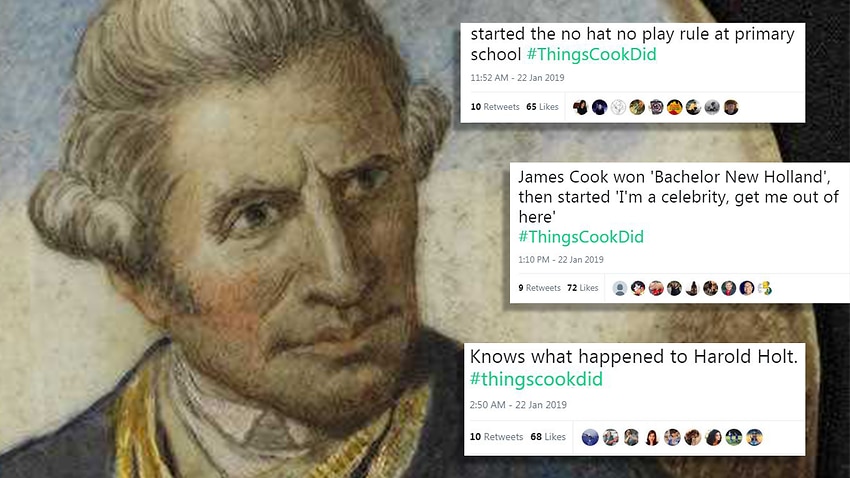 A day after Prime Minister Scott Morrison announced the government would spend $6.7 million to sail a replica of James Cook's ship the Endeavour around the country, Aussies have responded in the most Australian way possible - by hilariously mocking the announcement on Twitter.

Using the hashtag #WhatCookDid, Twitter users offered up satirical achievements of the controversial captain after Mr Morrison called the circumnavigation a "re-enactment of the voyage" of Captain Cook on ABC Radio - despite the fact Captain Cook never actually sailed around the entirety of Australia.

While Captain Cook charted the east coast, Matthew Flinders was the first to sail around the country between 1801 and 1803.

On Wednesday the hashtag was trending in Sydney.

Fun fact: Captain Cook named one of his greatest inventions after his favourite Bosuns aboard the HMS Endeavour, their names were Tim and Tam. #ThingsCookDid pic.twitter.com/E6V2yKFXlT

I'll always remember Cook's amazing first Gold Medal for Australia at the 2002 Winter Olympics. He came from behind to win the 1,000 m event after all his opponents were involved in a last corner pile-up. Classic Cook. #ThingsCookDid pic.twitter.com/hcBuZNER9X

As Twitter made fun of the announcement, opposition leader Bill Shorten accused Mr Morrison of having a "bizarre Captain Cook fetish".

"Mr Morrison has come to Queensland to get his historical facts wrong," Mr Shorten said.

The replica Endeavour will set sail from Sydney in 2020, stopping at 39 coastal locations and circling the country over 14 months.

Australian PM: *offers to “re-enact” an historical voyage that didn’t take place to educate people about.... what James Cook did*

Cook was able to have avacados on toast AND afford a new home. #ThingsCookDid

Mr Morrison said the circumnavigation, which will mark 250 years since Captain Cook's voyage to Australia, would offer a new generation insight into the journey.

"As the 250th anniversary nears we want to help Australians better understand Captain Cook's historic voyage and its legacy for exploration, science and reconciliation," he said on Tuesday.

Alongside the circumnavigation, the Cooktown 2020 Festival will receive $5.45 million to develop sites and celebrate local Indigenous culture.

Drove a bus half way across Australia to perform a Drag Show in Alice Springs #ThingsCookDid pic.twitter.com/XDgcs3n7Rc

Cook was the first explorer to fully embrace Climate Change by insisting he only travel in an emission-neutral vehicle powered purely by wind. Many at the time said it simply couldn't be done without coal. #ThingsCookDid

Mr Morrison has since come under fire from Indigenous groups for the $6.7 million spend. They argue that the money would be better spent on Indigenous services and education.

Aboriginal Legal Services pointed out that in the same year as the re-enactment, they were facing a budget cut.

Matthew Flinders was British. Cook was British. King Bungaree was the first person from this country to circumnavigate the continent with Flinders from 1802 to 1803. There are no statues of Bungaree in this country. @IndigenousXLtd pic.twitter.com/t0D8N57EKR

Meanwhile, co-chair of Naidoc Week and host of The Point on NITV John Paul Janke tweeted that instead of celebrating Captain Cook, we should celebrate King Bungaree - the first Australian to circumnavigate the continent alongside the British Captain Flinders.

"There are no statues of Bungaree in this country," he wrote in a message posted on Twitter.