Iraqi forces have retaken control of the last sector of Kirkuk province, a security official has said.

Iraqi forces clashed with Kurdish fighters Friday and retook control of the last sector of Kirkuk province in northern Iraq under the control of the Kurds, a security official said.

"The army, police and counter-terrorism forces entered the centre of the Altun Kupri region," just 50 kilometres from the Iraqi Kurdish capital of Arbil, said the source, asking not to be named.

"There were clashes but they managed to launch the assault... and hoist the flag on the municipality building."

The speed with which Iraqi troops this week overwhelmed Kurdish forces in oil-rich Kirkuk, days after ousting the Islamic State group, marks a radical change in the balance of power, analysts say. 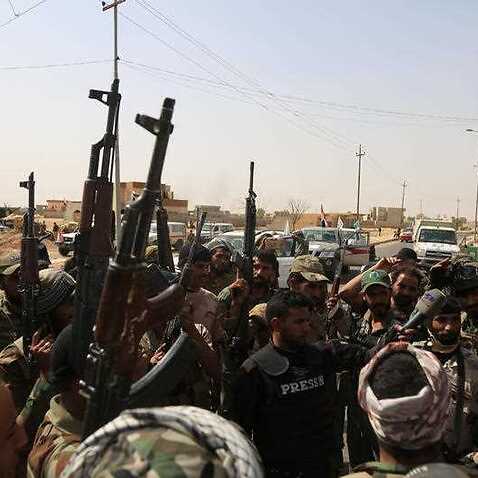 For 14 years since the US-led invasion, the Kurds had taken advantage of the weakness of the federal army to slowly chip away at territory they had long claimed outside their autonomous region in northern Iraq.

But in a lightning operation this week, Baghdad's forces swept through almost all of the territory the Kurds had gained, including Kirkuk's key oil fields, virtually confining them to their original three provinces.

The Kurds' precipitous withdrawal from thousands of square kilometres of cherished territory highlighted the newfound prowess of the Iraqi army - rearmed, retrained and battle-hardened during three years of fighting against the Islamic State (IS) group.

US-led coalition Colonel Ryan Dillon said federal government forces had proven their mettle in the nine-month battle for Iraq's second city Mosul that culminated in the jihadists' defeat in July.

He said it had been "some of the most difficult combat fighting... in decades" and had proven that the army was a "very capable fighting force".

"Some have even said that they are one of the premier security forces now in the region," Col Dillon said.

But it has been a long road back.

Humiliated in the US-led invasion of 2003, Iraq's army was then disbanded by the occupation administration which branded it a symbol of the repression of Saddam Hussein's regime.

The new army the coalition slowly formed was dogged by the problem of "ghost soldiers" who existed only on paper and who auditors found made up more than half of its payroll.

Its failings became all too clear when IS militants swept through northern and western Iraq in 2014 seizing a third of the country.

Seven army divisions simply collapsed - their soldiers discarding their weapons and uniforms, and abandoning their positions in the cities of Mosul, Tikrit, Kirkuk and Ramadi.

"In 2014, the Iraqi armed forces suffered from weak morale, corrupt and nepotistic leadership, and lack of purpose," Emile Hokayem, senior fellow for Middle East security at the International Institute for Strategic Studies, said.

"The massive reforms undertaken since... as well as a massive US effort to arm and support the Iraqi security forces, have generated a more disciplined and more cohesive force that has shown military ability across the battlefield."

New Iraqi Prime Minister Haider Al-Abadi secured the return of Western military trainers and advisers who had left in 2011.

"At the same time, the Iraqis have probably made some improvements in terms of the Iraqis addressing key problems such as corruption, poor logistics and low morale," Mr Binnie said.

The Kurdish peshmerga too have received Western training - some 22,800 of them - but they have not had the same level of battlefield experience as federal forces during the fightback against IS.

Despite their once fearsome reputation as hardened guerrilla fighters, the peshmerga did not play a leading role in the campaign.

They did not take part in the battle for Mosul, halting their advance some 30 kilometres east of the IS bastion.

Nor did they take part in last month's recapture of Hawija, the last town in Kirkuk province held by IS.

Mr Hokayem said the Kurds had also been plagued by a divided political leadership which had taken opposing sides over the fateful decision to hold last month's independence referendum that triggered Baghdad's punishing riposte.

"The peshmerga were not defeated militarily; instead they collapsed because of their fragmentation and lack of political cohesion," he said.

"Today's peshmerga face a hardened, motivated, better-equipped and larger force, and lack the cohesion and fierceness of their predecessors."

"This in part is due to the stability and economic development of the Kurdistan region of Iraq since 2003: this has affected the military ethos of the Kurdish community," he said.