Iraqi Prime Minister Haider al-Abadi said on Thursday that he would accept only the annulment of a Kurdish vote for independence, not the freeze that Kurdish leaders have offered.

"We will accept nothing but the annulment of the referendum and respect for the constitution," Abadi said in a statement released by his Baghdad office as he holds talks in neighbouring Iran.

Iraqi troops launched an assault on the last Islamic State group bastion in the country on Thursday even as the Kurds said Baghdad's forces had attacked their fighters near the border with Turkey.

There had been fears that the bitter dispute that has raged between the Baghdad government and Iraqi Kurdish leaders since they held a referendum for independence last month would hamper the campaign against the jihadists.

But federal troops and allied paramilitaries pressed ahead with a threatened drive up the Euphrates valley towards the Syrian border in a bid to retake two Sunni Arab towns that have been bastions of insurgency since soon after the US-led invasion of 2003.

The US-led coalition battling IS said it was "the last big fight" against the jihadists.

Iraqi forces have retaken more than 90 per cent of the territory IS seized in the country in 2014, with the jihadists now confined to a small stretch of the valley adjoining some of the last areas they still hold in Syria.

"The heroic legions are advancing into the last den of terrorism in Iraq to liberate Al-Qaim, Rawa and the surrounding villages and hamlets," Prime Minister Haider Al-Abadi said in a statement from neighbouring Iran where he is on a state visit.

"They will all return to the arms of the motherland thanks to the determination and endurance of our fighting heroes," he added.

"The people of IS have no choice but to die or surrender." Al-Qaim has been renowned as a bastion of Sunni Arab insurgency for years.

Coalition troops carried out repeated operations with names like Matador and Steel Curtain in 2005 to flush out Al-Qaeda jihadists.

The town lies at the heart of a wealthy agricultural region and was once a railhead for the phosphate mining centre of Akhashat in the desert to the south.

But American air strikes in 1991 and then United Nations inspections transformed the factory into a metallic skeleton. 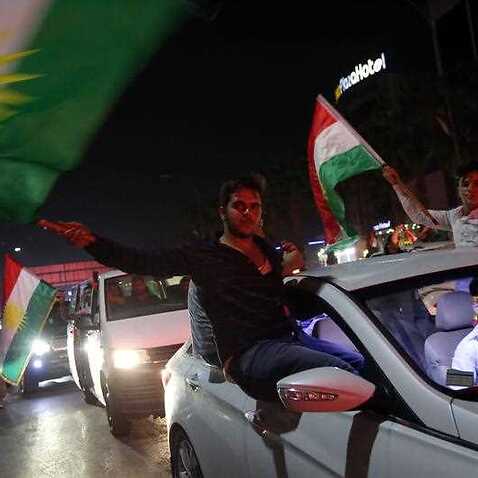 Coalition commanders are convinced that Al-Qaim will be IS's last stand in its ambitions to territorial control of the cross-border caliphate it proclaimed in 2014.

On the Syrian side of the border, Russian-backed government forces have been pushing down the Euphrates valley while US-backed Kurdish and Arab fighters have been attacking the jihadists from their stronghold in the north.

The launch of the offensive against IS's last Iraqi redoubt comes with thousands of Iraqi federal troops and militia engaged in an operation to reassert federal control over thousands of square kilometres (miles) of territory long disputed with the Kurds.

On Thursday, federal troops and allied paramilitaries stepped up that operation, assaulting Kurdish forces in a disputed oil-rich area of Nineveh province in the far north near the Turkish border, Kurdish authorities said.

"They are advancing towards peshmerga positions."

Parts of Nineveh province north and east of Iraq's second city Mosul are some of the last areas that Kurdish forces still hold outside their longstanding three-province autonomous region.

Kurdish leaders have long argued that their historic Kurdish majorities mean that they should be incorporated in their autonomous region and had taken advantage of the chaos of the war against IS to wrest control of many of them.

But now they have been pushed out of the whole of Kirkuk and Diyala provinces, losing the rich oil fields of Kirkuk in a massive blow to the autonomous region's finances and its dreams of economic self-sufficiency.

The Zummar district lies close to the course of a strategic oil export pipeline linking the Kirkuk fields with the Turkish Mediterranean port of Ceyhan that fell into disuse during IS's lightning sweep through northern and western Iraq in 2014.

"We are ready to provide any kind of support to allow the operation of the pipeline," Erdogan told a joint news conference after their talks.

To the anger of Baghdad, Ankara had allowed the Kurds to open an alternative export pipeline through its territory to export oil from Kirkuk and other areas it then held.