Is Trump about to start a trade war?

Trump's tariffs on steel and aluminium imports will not impact China, the subject of much sabre-rattling on trade by the US President, but instead will hit US allies hardest, experts say. However things could change quickly. 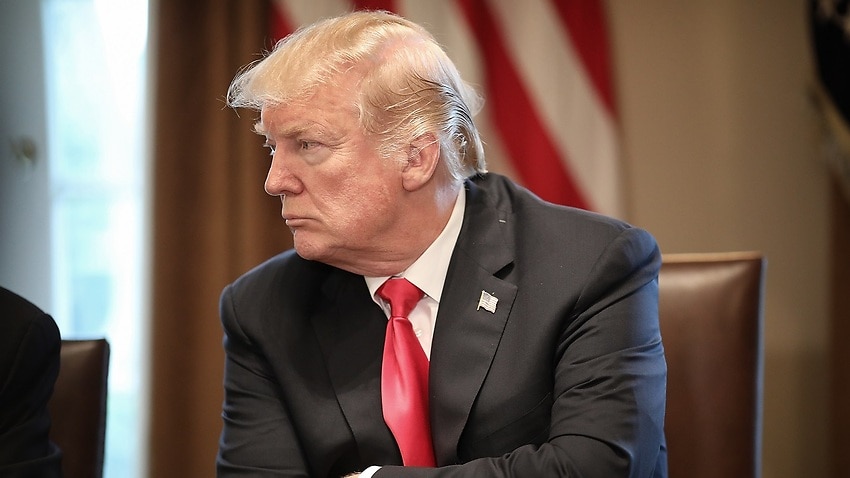 US President Donald Trump has approved across-the-board tariffs of 25 per cent on steel imports into the United States and 10 per cent on aluminium. Source: Getty

Why are Trump’s new tariffs a problem?

President Donald Trump has approved across-the-board tariffs of 25 per cent on steel imports into the United States and 10 per cent on aluminium. This will hit the countries that export significant amounts of steel and aluminium to the US pretty hard.

The idea is to bolster domestic steel production, creating an estimated 33,000 jobs as the US steel industry expands to make up the shortfall in imported steel.

But Dr Stephen Kirchner, trade and investment expert at the University of Sydney’s United States Studies Centre said Mr Trump’s move is likely to destroy five jobs elsewhere in the US economy for every new job created in the steel industry.

The price of steel is likely to rise in the short term in the US, with flow-on effects to the building and defence industries, potentially pushing up inflation.

The concern internationally is that unilaterally imposed US tariffs could anger trading partners and provoke tit-for-tat tariff retaliations by countries impacted, which could escalate into a damaging trade war, hurting international trade and all countries’ economies.

It’s not about China, yet.

Interestingly, China’s steel exports to the US are relatively tiny, about 2 per cent of the US market, so the metals tariffs will have marginal impact on China. Donald Trump’s new tariffs will instead hit US allies, according to trade experts.

“Geopolitically, there is a misconception that it’s about a pending US-China trade war,” Dr Giovanni Di Lieto, an international trade law expert from the Monash University Business School, told SBS News. “But three other countries are clearly the target Canada, South Korea and Germany.”

The US imports most of its steel from Canada. Since Mr Trump took office, the US has been engaged in fraught discussions with Canada and Mexico to renegotiate the North American Free Trade Agreement, Dr Di Lieto said: “So this is a way for Trump to strongarm Canada and Mexico into more favourable terms in NAFTA.”

Dr Di Lieto said it is also sending a signal to South Korea, an important supplier of steel to US markets, because the US-Korea free trade agreement, known as KORUS, has precipitated a steep increase in the trade deficit with South Korea.

It is also about Germany, with which the US has a large trade deficit. “Germany’s more a commercial target, to reduce the imports of German cars by making them more expensive in the US, and make US cars more competitive in the short-term,” Dr Di Lieto said.

But it could be about China, soon.

US President Donald Trump chats with Chinese President Xi Jinping during a welcome ceremony at the Great Hall of the People in Beijing, November 9, 2017. Source: AP

There has been an ongoing investigation in the US, led by President Trump’s highly protectionist US Trade Representative Bob Lighthizer, into whether China has damaged US interests in requiring the forced transfer of US intellectual property rights when US businesses invest in China.

The US would actually have recourse through World Trade Organisation rules and procedures against China in these cases, without the need to resort to retaliatory tariffs; but the Trump administration is ideologically opposed to the multilateralism embodied in the WTO.

What happens next - will there be a trade war?

“Taken individually the tariffs imposed on particular products are not particularly serious; you wouldn't say that by themselves they’re a trade war,” he said. “But cumulatively what we are seeing is an increase in protectionism in the US that’s going to prompt retaliatory actions on the part of other economies - the EU, China. … Probably the worst possible outcome here is we have WTO rulings against the US on key issues, the US starts ignoring those rulings and then the international rules based trading system begins to break down.”

But maybe not. Mr Trump’s protectionist push “sent Wall Street into shock,” Dr Remy Davison, a trade expert from the Monash European and EU Centre, told SBS News. He puts the chance of escalation to trade war at 50-50, in part because President Trump is so erratic.

“You can’t have the world’s biggest economy act like this and not expect there are going to be reverberations all through the international financial system,” he said. “But Trump is incredibly unpredictable. What has generally happened [with Trump’s more radical policies] is that cooler heads have ultimately prevailed.”

What does it mean for Australia?

For Australia, it is a mixed bag. Despite the impact on sectors like manufacturing, Australia's economy overall has been a huge beneficiary of the open, rules-based trading order established under the auspices of the WTO and its predecessor, the General Agreement on Tariffs and Trade, so any threat of a return to protectionism is not good for a trading nation like ours.

The US Trade Representative’s Office said Australia is not exempt from the metals tariffs, in defiance of an apparent promise made by Mr Trump to Prime Minister Turnbull at the last G20 meeting, so that means Australian steelmakers like BlueScope will be impacted where they manufacture outside the US, Dr Davison said.

A container ship is docked at the Port of Brisbane, Wednesday, February 7, 2018. Source: AAP

“So that means jobs and cuts to Australian exports. It also raises the question of how much the free trade agreement with the US, which has been in place since 2004, is really worth,” Dr Davison said.

But Dr Di Lieto said Australia is well placed to ride out the US tariff convulsions in the short-term, because it can divert its steel and aluminium exports to other countries with which it has strong bilateral relationships.

“In my analysis, Australia is very well placed to reap the gains in the short term of trade diversions that might arise from these trade contests… should Australia stay calm and not jump on any country’s bandwagon,” he said. “We can still play on both tables.”

That is assuming the conflict does not escalate and countries harden their positions, or begin taking sides against the US or China or the EU, he added.

Dr Kirchner from the US Studies Centre said there is a globalist faction that is pro-free trade in the White House nominally led by people like Treasury Secretary Steven Mnuchin or Defence Secretary James Mattis. However, there is also the protectionist faction embodied by Lighthizer and Mr Trump’s trade adviser, the China hawk Peter Navarro, which appears to be the ascendant.

But some Republicans are troubled by the President's moves, with House Speaker Paul Ryan among others coming out strongly against the tariffs. "We are extremely worried about the consequences of a trade war and are urging the White House to not advance with this plan," Ryan's office said Monday.

“It shows us that Trump meant what he said when he was campaigning during the 2016 presidential election,” Dr Kirchner said, “that he would seek to raise tariffs and punish other countries for what he sees as abuses of the international trading system.

“I think the motivation is primarily political, he sees this as working for him politically. I think he thinks the politics will prevail over the economics. But it's not clear to me that Trump himself or some of his economic advisers understand the key implications of what they’re doing. It will be very harmful to the US economy… and very bad for the international trading system.”