Brisbane have denied they've made any approach to bring Israel Folau back to the NRL club following media reports they were pursuing the former Wallabies star.

Less than a week after Israel Folau and Rugby Australia settled - for an undisclosed amount - rumours have begun to drop on just what the player's next move may be.

Earlier this week, the former Wallaby and Rugby Australia settled their dispute over the sacking.

However, Rugby Australia CEO Raelene Castle didn’t rule out a return to the sport of Rugby for Folau - saying “never say never” - but it seems his options might be already running out. 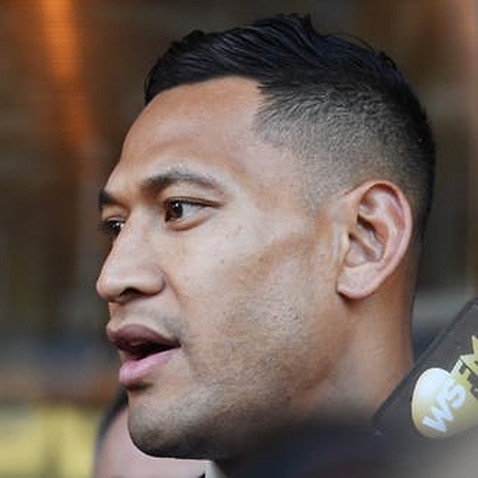 News Corp Australia on Saturday reported that CEO of South African Super Rugby franchise the Bulls, Alfonso Meyer, had ruled out chances of the star player joining his side - saying he was simply too controversial.

Meanwhile, on Sunday, Brisbane quickly distanced themselves from reports that they were keen to bring help Folau with another code-switch back to the NRL.

The Broncos were linked in media reports to a potential move to sign the former Wallabies winger.

But within hours of the reports being published, the Broncos issued a brief statement saying they had no intention of bringing the 30-year-old back to Red Hill. Israel Folau and his wife Maria leave the Federal Court in Melbourne after a long mediation with Rugby Australia.
AAP

"Contrary to media speculation, the Broncos have not been part of discussions of any kind with the player," the Broncos said in the statement posted on their website.

"The club's roster is settled for the 2020 season.

"We wish Israel well in the future."

News Corp Australia reports Folau has been training hard to get himself fit for a preferred return to rugby league.

ARL Commission chairman Peter V'landys has previously publicly insisted that a return to the NRL for devout Christian Folau would be difficult given his controversial stance on homosexuality is incompatible with the game's ethos.

The News Corp Australia report claims Folau would be willing to allow the NRL to vet his future social media posts if it allowed him to move back to the competition.

Folau played for Melbourne and the Broncos in his four-season NRL career between 2007 and 2010 before switching codes to join expansion club GWS in the AFL.

He played 13 AFL matches for the Giants before joining rugby union in 2013 and going on to make 62 Test appearances for the Wallabies.