Gruesome footage of whaling conducted in the Southern Ocean has been released after suppression orders were lifted.

The brutality of the footage is shown when whales are harpooned and dragged up the side of a vessel or left to thrash about in an attempt to escape.

Sea Shepherd's Managing Director Jeff Hansen said the whales were being hunted in a sanctuary designed to protect the animal.

"When these whales are hit with an explosive harpoon it sends shrapnel through their bodies and hooks come out, so there is no way for these whales to escape.

"They're thrashing around trying to get away from these harpoon ships but this cable drags them back up to the surface.

"It takes a long time for these whales to die, it's barbaric." 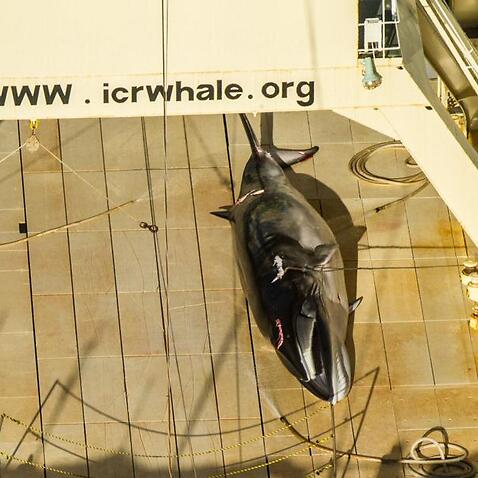 The confronting footage was filmed and suppressed by the Australian government over fears it could damage international relations with Japan.

But in May, the Australian Information Commissioner granted Sea Shepherd access to some of the footage as a result of it falling under the Freedom of Information Act.

This is the footage that the Australian Gov't didn't want you to see! Since 2012, Sea Shepherd has been a part of a joint fight to get the Gov't to release rare whaling footage obtained on a mission to the Antarctic. View: https://t.co/1WaKjjiBVH #333 pic.twitter.com/uwg2NbTtZl

Japanese whaling vessels left port in early November for an annual hunting voyage in the Antarctic, this time to kill 333 minke whales, despite international calls to stop the practice.

The fisheries agency said a group of five ships, headed by the 8,145-tonne mother ship Nisshin Maru, will conduct the hunt until March to study whale behaviour and biology.

The voyage has been carried out since 2015 "to devise more precise calculation methods for a sustainable catch limit for Antarctic minke whales as well as to study the ecosystem of the Antarctic waters", the ministry said in a statement.

Japan is a signatory to the International Whaling Commission's (IWC) moratorium on hunting, but exploits a loophole that allows whales to be killed in the name of scientific research.