'It's horrible': About 60 asylum seekers moved to new Melbourne hotel to continue their detention

About 60 asylum seekers and refugees have been moved to a new hotel in Melbourne to continue their detention. One of them says his new accommodation is "horrible". 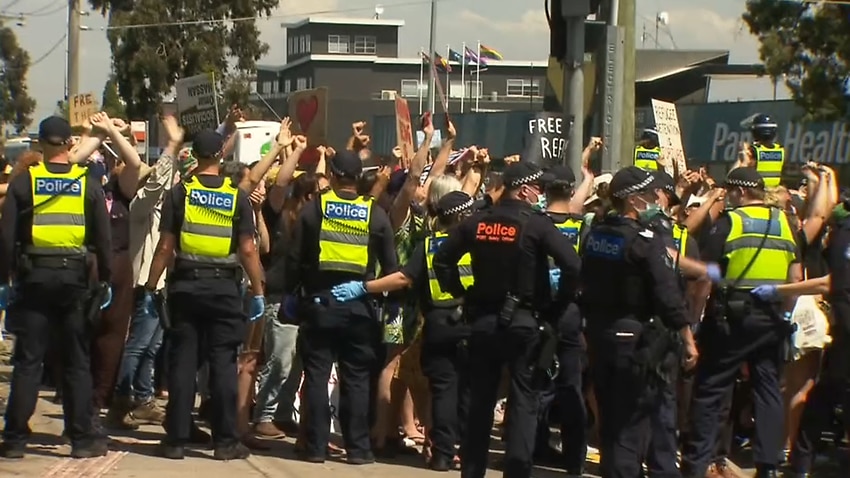 Police and protesters outside the Mantra hotel as asylum seekers are taken to a another hotel in Melbourne. Source: SBS News

About 60 detainees have been transferred under police guard from a hotel in Melbourne's north to a former quarantine hotel in the city's inner suburbs.

The transfer took place on Thursday amid protests in which half a dozen people were arrested.

One of the detainees, Kurdish refugee Mostafa Azimitabar, says the new accommodation at the Park Hotel in Carlton is "horrible".

“It’s horrible. I cannot breathe,” he told The Feed. “I am just fighting for my freedom.”

Mr Azimitabar said the windows at Park Hotel are tinted, meaning he can see people outside but they cannot see him.

“At Mantra [the previous hotel], I had a window and I could see people outside smiling at us, waving at us. Here, there is no window,” he said.

“I think this is one of their plans, for us not to be seen by people," he added. “They want people in Australia not to see our faces.”

The Park Hotel was previously known as the Rydges on Swanston and was one of the quarantine hotels where a coronavirus cluster emerged earlier this year.

Mr Azimitabar arrived in Australia in July 2013, and was granted refugee status in 2017. He has been in detention for more than seven years.

There have been daily protests over the past fortnight at the Mantra Bell City hotel in Preston where the detainees were previously housed.

Darebin councillor Susan Rennie was among half a dozen people arrested on Thursday morning.

Another protest is underway at the Park Hotel on Thursday evening.

About 60 men were held in indefinite detention at the Preston hotel for up to 18 months.

The detainees had previously been transferred from Manus Island so they could receive medical treatment in mainland Australia.

In a statement, the Australian Border Force confirmed the people detained in Preston have all been moved out of the hotel.

"Transitory people are encouraged to finalise their medical treatment in Australia so they can continue on their resettlement pathway," the statement says.

Protesters outside the Mantra hotel in Preston on Monday. Source: AAP

"There is no reason for their pain and trauma to be compounded by keeping them confined in tiny rooms without access to the most basic of needs like fresh air," Dr Thom said.

"We are extremely disappointed at the lost opportunity in removing these vulnerable people to what is another detention facility when there are any number of people willing to host them in the community."

A lawyer representing some of the refugees, Alison Battisson, said a recent Federal Court ruling means the detainees should be released unless there are plans to provide them with medical assistance.

"I don't know if these companies got legal advice ... I'd be very concerned if I was them," she said.

Refugee advocate Chris Breen said transferring the men from detention in one hotel to another is cruel, especially when some hoped they might be released instead.

"The government can't hold these people forever," he said.