Authorities are calling for calm after coronavirus fears saw a scuffle break out over toilet paper supplies at a Sydney supermarket. 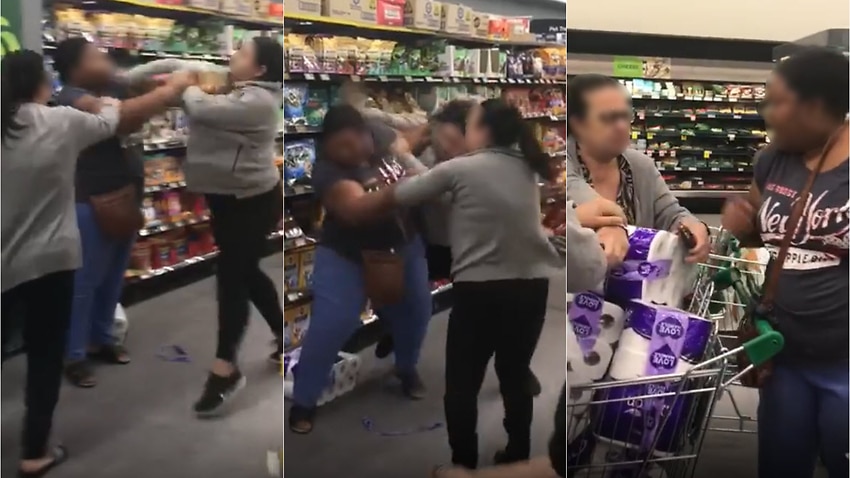 Footage of the incident went viral on social media in March amid widespread panic buying of toilet paper. Source: Facebook

A fight between shoppers over toilet paper has been likened to "the Thunderdome" from the Mad Max film series, with police urging people to remain calm amid coronavirus panic.

A brawl broke out between Woolworths customers on Saturday morning when a woman and her daughter appeared to begin stockpiling packs of toilet tissue, attracting the ire of a fellow shopper.

Video posted to social media shows a woman punching another customer while they jostle over toilet paper rolls at Chullora in Sydney's west.

Hair is pulled and punches are thrown as the customers try to claim the in-demand product.

"I just want one pack," a woman says, pointing her finger in the face of another shopper.

Read More
The psychology around why people are stockpiling toilet paper

"No, not one pack!" the other woman replies.

"What's the limit?" someone else adds.

Woolworths staff then intervene and break up the fight.

"Think about what you're doing, you need to stop," a staff member says.

"There's a limit and it's unfair."

"It's just bad behaviour by people that are panicking and there is just no need for any of that panic because there is sufficient supplies," Inspector New said on Saturday.

"It's not the Thunderdome, it's not Mad Max. We don't need to do that."

Police say no arrests have been made thus far, but officers are working to identify two women involved in the altercation.

"At this stage, police are going to continue to investigate the matter," Inspector New said.

On Wednesday, Woolworths announced a cap of four-packets of toilet paper per person to help meet the rise in demand for non-perishable groceries.

We’ve implemented a 4 packet limit on toilet paper to ensure more customers can access stock. The vast majority of products in our range remain available & we're working hard with our suppliers to ramp up production & deliveries to restock shelves ASAP.https://t.co/1TUo2cwc41

The supermarket giant said the cap was intended to "ensure more customers have access to the products."

Competitors Coles, Costco and Aldi followed suit shortly after, placing their own restrictions on purchase quantities.

Photos of empty supermarket shelves have been circulating on social media, causing panic, despite reassurances from authorities around the country there is no need for people to stockpile supplies.

NSW Premier Gladys Berejiklian has urged the public to remain calm, saying there were no issues with toilet paper supply across the state.