The police chief personally oversaw corporal punishments including amputations and floggings while the Malian city was under the control of Islamist militants.

A Malian jihadist police chief committed "unimaginable crimes" during a reign of terror and sexual slavery in the fabled shrine city of Timbuktu, prosecutors told the International Criminal Court at the start of his trial Tuesday.

Al Hassan Ag Abdoul Aziz Ag Mohamed Ag Mahmoud, 42, personally oversaw corporal punishments including amputations and floggings while the Malian city was under the control of Islamist militants for almost a year from early 2012, prosecutors said.

Al Hassan also arranged for women and girls to be forced to marry militants as part of a system of "gender-based persecution", the ICC's chief prosecutor Fatou Bensouda told the court. Al Hassan is charged by The Hague-based court with war crimes, crimes against humanity, rape and sexual slavery.

"Today marks the beginning of the long-awaited trial of the unimaginable crimes which have been committed in Mali," Ms Bensouda said.

"Al Hassan was directly involved in the violence and torture inflicted on the men, the women and the children of Timbuktu. He worked in the heart of a repressive, persecuting system."

Al Hassan - who appeared in court in The Hague wearing a traditional turban, and a face mask to protect against coronavirus - said he "understood" the charges but did not enter a plea.

'Scared out of their minds'

The prosecutor said Al Hassan was a key figure in the Islamic police and court system set up by the militants after they exploited an ethnic Tuareg uprising in 2012 to take over cities in Mali's volatile north.

The jihadists from the Al-Qaeda in the Islamic Maghreb and Ansar Eddine groups also destroyed the centuries-old shrines of Timbuktu.

"Timbuktu the pearl of the desert, whose population had been living in peace for years, was subject to their diktats," Ms Bensouda said, adding that the militants' aim was to "strike fear into people, to spread terror". 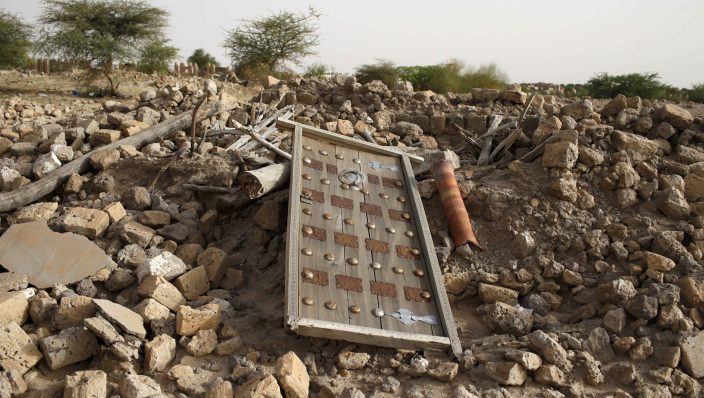 The rubble left from an ancient mausoleum destroyed by Islamist militants, is seen in Timbuktu.
AAP

Al Hassan arrested people, conducted investigations during which suspects were tortured, referred cases to the Islamic court and "participated personally in the meting out of corporal punishment by the police," Ms Bensouda said.

She said the court would see a video in which a man's hand is amputated in a public square before the entire population of Timbuktu "in the most brutal way possible, with a type of long knife".

The prosecutor said Al Hassan had admitted to investigators that Timbuktu residents "were scared out of their minds".

'Women suffered the most'

The Islamists are also accused of forcing women and girls to marry militants as part of a system of "gender-based persecution".

"It was the women and girls of Timbuktu who were targeted and suffered the most," Bensouda said, with some raped repeatedly by "one or more members" of the militant group.

One victim told investigators that "all that was left of me was a corpse". Al Hassan was also shown on video being "personally involved" in the flogging of women accused of adultery, the prosecutor said.

Other women were beaten and imprisoned for breaching rules including failing to wear prescribed clothing, giving water to a man or not having gloves.

Al Hassan is the second Islamist extremist to face trial at the ICC for the destruction of the Timbuktu shrines, following a landmark 2016 ruling at the world's only permanent war crimes court.

In the court's first case to focus on cultural destruction, the ICC judges found Ahmad al-Faqi al-Mahdi guilty of directing attacks on the UNESCO World Heritage site in 2012.

He was sentenced to nine years in jail.

Timbuktu's tombs were rebuilt after the jihadists were thrown out, but the city remains in the grip of insecurity and tourists who once flocked there are now scarce.