Joe Biden has been confirmed as next US president after California delivered him its 55 electoral college votes, pushing him over the 270 threshold. 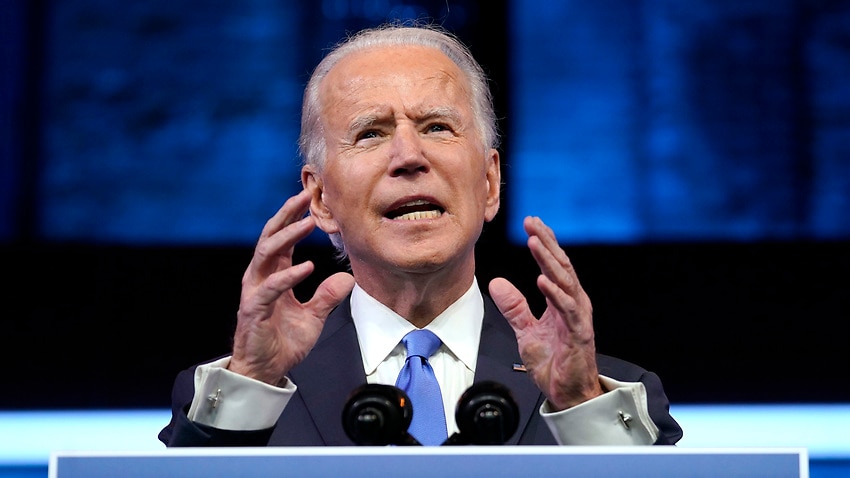 Joe Biden has vowed to fight for changes to gun laws before any further mass shootings occur in the United States. Source: Getty

Democrat Joe Biden called on Americans to “turn the page” on the Trump era in a prime-time speech hours after prevailing over the Republican in the state-by-state Electoral College vote that officially determines the US presidency.

“The flame of democracy was lit in this nation a long time ago,” he said in his speech to mark his Electoral College victory. “And we now know that nothing — not even a pandemic — or an abuse of power — can extinguish that flame.

“In this battle for the soul of America, democracy prevailed.”

As President-elect @JoeBiden said, our democracy gives Americans the right to have their voice heard, have their vote counted, and elect our nation’s leaders.

Over 155 million Americans voted—and the will of the people prevailed.

Mr Biden tore into Mr Trump with his strongest criticism since the election, saying the Republican had defied the constitution and the "will of the people" in not accepting the results.

Earlier in the day, electors in several major battleground states where Mr Trump has unsuccessfully sought to reverse the outcome - Arizona, Georgia, Michigan, Nevada, Pennsylvania and Wisconsin - also voted for Mr Biden, who is set to take office on 20 January alongside running mate Kamala Harris.

Mr Biden planned a prime-time address at 11.30am AEDT to mark the occasion and call on Americans to “turn the page” on the Trump era.

“The flame of democracy was lit in this nation a long time ago,” he was expected to say, according to excerpts released by his transition team. “And we now know that nothing — not even a pandemic — or an abuse of power — can extinguish that flame.

“In this battle for the soul of America, democracy prevailed.”

There was next to no chance that Monday’s voting would negate Mr Biden’s victory and, with Mr Trump’s legal campaign to reverse the results failing, the president’s dim hopes of clinging to power rest with persuading Congress not to accept the electoral vote during a 6 January special session - an effort that is virtually certain to fail.

Once in office, Mr Biden faces the challenging task of fighting the coronavirus pandemic, reviving the US economy and rebuilding relations frayed with US allies abroad by Mr Trump’s “America First” policies.

Under a complicated system dating back to the 1780s, a candidate becomes US president not by winning a majority of the popular vote but through the Electoral College system, which allots electoral votes to the 50 states and the District of Columbia largely based on the size of their population.

Electors are typically party loyalists who represent the winning candidate in their state, with the exception of Maine and Nebraska, which give some of their Electoral College votes to the presidential candidate who won in the state’s congressional districts.

While there are sometimes a handful of “rogue” electors who vote for someone other than the winner of their state’s popular vote, the vast majority rubber-stamp the results.

Read More
Meet the US Electoral College’s biggest haters: some of the electors themselves

Mr Trump said late last month he would leave the White House if the Electoral College voted for Mr Biden, but has since pressed on with his unprecedented campaign to overturn his defeat, filing without success numerous lawsuits challenging state vote counts.

Earlier on Monday, he repeated a series of unsupported claims of electoral fraud.

“Swing States that have found massive VOTER FRAUD, which is all of them, CANNOT LEGALLY CERTIFY these votes as complete & correct without committing a severely punishable crime,” he wrote on Twitter.

Swing States that have found massive VOTER FRAUD, which is all of them, CANNOT LEGALLY CERTIFY these votes as complete & correct without committing a severely punishable crime. Everybody knows that dead people, below age people, illegal immigrants, fake signatures, prisoners,....

“Swing States that have found massive VOTER FRAUD, which is all of them, CANNOT LEGALLY CERTIFY these votes as complete & correct without committing a severely punishable crime,” he wrote on Twitter.

Now the Electoral College vote is complete, Mr Trump’s sole remaining gambit is to persuade Congress not to certify the count on 6 January.

Any attempt to block a state’s results, and thus change the overall US tally, must pass in both chambers of Congress that day. Republicans would very likely fail to stop Mr Biden taking office as planned on 20 January because Democrats control the House of Representatives and several Republican senators have acknowledged Mr Biden’s victory.

In 2016, Mr Trump won the Electoral College despite losing the popular vote to Democrat Hillary Clinton by nearly 3 million votes. The formal vote earned extra attention when some Democratic activists called for electors to “go rogue” against Mr Trump. In the end, seven electors broke ranks, an unusually high number but still far too few to sway the outcome.