On the same day Aboriginal Australian Ashleigh Barty became the first local woman to reach the Australian Open semifinals in 36 years, a protest called for Margaret Court Arena to be renamed after Indigenous champion Evonne Goolagong.

Tennis Australia has slammed two greats of the sport for breaching protocol after they carried a banner onto the court calling for Margaret Court Arena to be renamed after Aboriginal tennis champion Evonne Goolagong.

The sporting body said an investigation had been launched into former player Martina Navratilova and John McEnroe on Tuesday, hours after they unveiled a banner on the court which read: "Evonne Goolagong Arena".

Former tennis champion Margaret Court, who was recognised on Monday night for 50 years since her grand slam win in 1970, has been widely criticised for her controversial views on same-sex marriage and transgender athletes.

"We embrace diversity, inclusion and the right for people to have a view, as well as their right to voice that view," a Tennis Australia spokesperson said in a statement to SBS News. 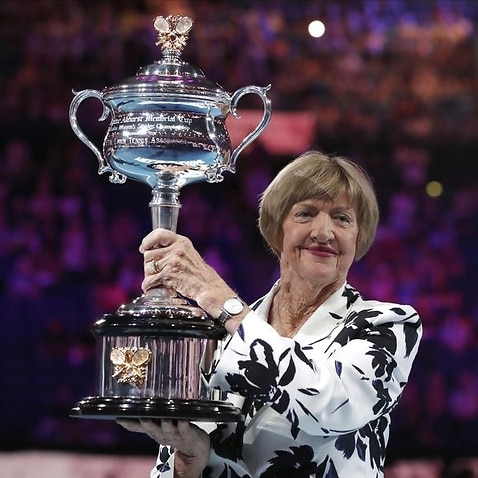 "But the Australian Open has regulations and protocols with respect to how any fan, player or guest can use our facility, the event and the global stage it provides. This is to ensure the integrity of our event.

"Two high-profile guests have breached these protocols and we are working through this with them."

The on-court call to recognise Goolagong came on the same day Ashleigh Barty, who is Aboriginal, became the first Australian woman to reach the Australian Open semifinals in 36 years.

On Monday, Navratilova, who is openly gay, published an open letter on tennis.com describing Court's past comments as "hateful and hurtful speech".

"When Margaret goes out of her way to single out a group of people and tell them they don’t deserve equal rights, that they are less than good parents, that they are not godly, that’s not merely free speech," she said.

"Why not pick someone whom every child can look up to and want to emulate - a champion who inspires and motivates young and old to do their best and be their best every day? For me, that person is Evonne Goolagong."

McEnroe has also criticised Court, describing the 77-year-old as a "crazy aunt".

"There's only one thing longer than a list of Margaret Court's tennis achievements - it's her list of offensive and homophobic statements," he said.

Goolagong was a seven-time tennis grand slam champion and sat at world No. 1. for a fortnight in 1976.