Julian Assange's fiancee publicly joins the campaign for his release

In her first public comments, Julian Assange's fiancee, has outlined the reasons why the Wikileaks founder should be released. 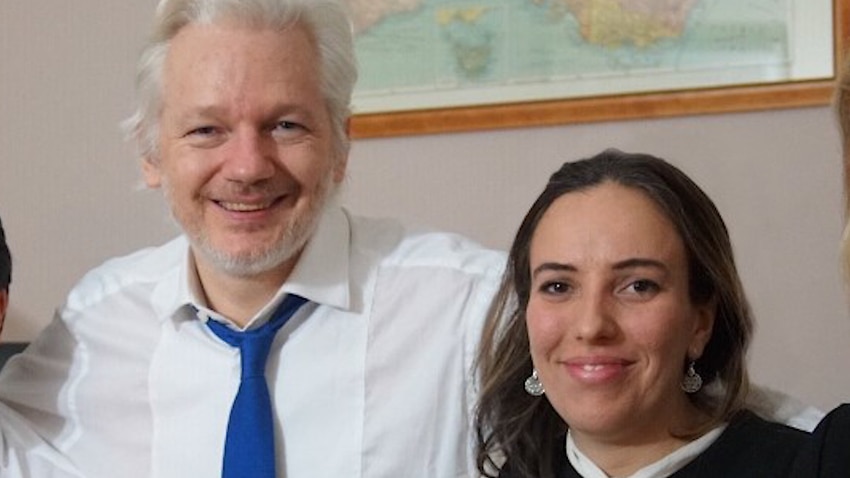 Julian Assange and his partner Stella Moris-Smith Robertson, who is pleading for his freedom. Source: AAP

The partner of Julian Assange, who gave birth to his two children while he was living inside the Ecuadorian embassy in London, has issued a plea for him to be released from prison.

Stella Moris-Smith Robertson said there were now genuine fears for the health of the WikiLeaks founder.

Mr Assange has been held in Belmarsh prison in London since he was dragged out of the embassy a year ago, and is awaiting an extradition hearing on behalf of the United States, where he is wanted for questioning over the activities of WikiLeaks.

He has been in poor health for months, but his friends say coronavirus is now spreading through Belmarsh prison.

One prisoner has died, and a number of prison officers are off sick, suspected of having the virus, his friends say.

In a statement to the courts supporting an application for bail, Ms Robertson reveals that she met Mr Assange in 2011 when she was a legal researcher, and was asked to look into Swedish legal theory and practice.

"Over time Julian and I developed a strong intellectual and emotional bond. He became my best friend and I become his," she wrote.

The friendship developed, and despite the "extraordinary circumstances", a close relationship began in 2015, she said.

The couple have two young children aged three and one according to reports from the United Kingdom newspaper The Mail on Sunday.

The newspaper published the report alongside photographs of Mr Assange with the toddlers and an interview with Ms Robertson who said they "fell in love" and were planning to marry.

The couple have been engaged since 2017, according to the paper, which said it learned about the revelations in court papers seen last week.

She said she has gone to great lengths to shield the children from the climate that surrounds Mr Assange.

"My close relationship with Julian has been the opposite of how he is viewed, of reserve, respect for each other and attempts to shield each other from some of the nightmares that have surrounded our lives together."

She said she was making the statement now because their lives were "on the brink" and she feared Mr Assange could die.

He is in isolation for 23 hours a day and all visits have stopped, she added.

The extradition hearing is fixed for May 18 after a court rejected calls for an adjournment until September after his legal team said there were "insuperable" difficulties preparing his case because of the COVID-19 pandemic.

Mr Assange faces 18 charges, including breaches of the US Espionage Act, for the 2010 release of a trove of secret files detailing aspects of US military campaigns in Afghanistan and Iraq.

He faces a maximum jail sentence of 175 years, if found guilty.

Mr Assange spent seven years at the Ecuadoran embassy in London, after being granted diplomatic sanctuary and political asylum by Ecuador in 2012.

Last year, that asylum was revoked and he was removed from the embassy by UK Metropolitan Police who had been invited in by Ecuadorian officials.

Mr Assange watched the birth of both children in London hospitals via live video-link and met the elder boy, named Gabriel, after he was smuggled into the embassy, the paper added.

Both boys are said to be British citizens and have reportedly visited their father in prison.

Ms Robertson told the Mail on Sunday: "I love Julian deeply and I am looking forward to marrying him.

"Julian has been fiercely protective of me and has done his best to shield me from the nightmares of his life."

She said she had lived "quietly and privately", raising Gabriel and his brother Max, while "longing for the day we could be together as a family".

Ms Robertson added: "Now I have to speak out because I can see that his life is on the brink,".