Julian Assange had his case files confiscated and was stripped naked by prison guards after the first day of his extradition hearing in London. 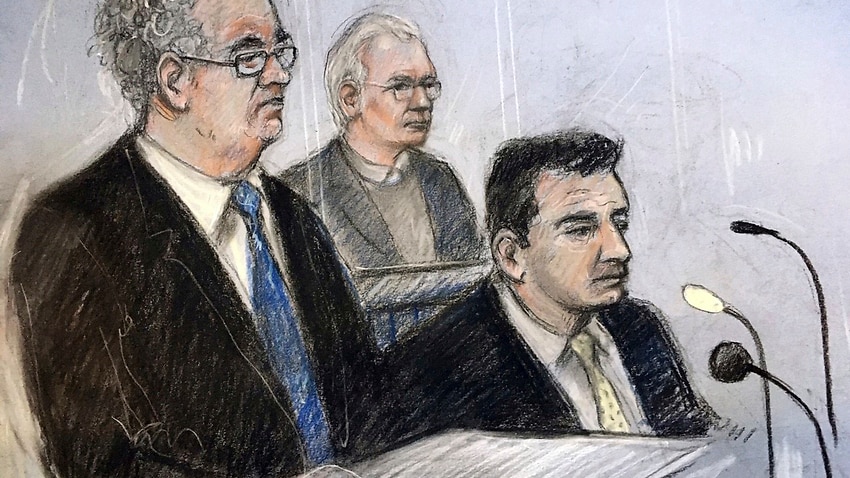 Julian Assange's lawyers say he's been subjected to harsh treatment in prison and is struggling to concentrate on his extradition hearing.

The WikiLeaks founder was stripped naked twice, handcuffed 11 times and had his legal case files confiscated by guards at London's Belmarsh Prison on Monday, his lawyers told the hearing on Tuesday.

Barrister Edward Fitzgerald said the Australian's treatment could "impinge on the defendant's ability to participate in these proceedings".

Mr Assange, 48, spent much of the second day of the hearing in the Woolwich Crown Court propped on an elbow looking at a skylight.

In the afternoon he appeared to be drifting off, prompting the judge to direct a member of his legal team, Gareth Pierce, to check on him.

Judge Vanessa Baraitser said she did not have the legal power to comment or rule on Mr Assange's conditions, but encouraged his legal team to formally bring the matter up with the prison.

"I think everyone in the court supports a fair hearing," she said.

Earlier, lawyers for the US government said Mr Assange published the real names of hundreds of US informants, risking their safety, in classified diplomatic cables in September 2011.

"Mr Assange did not have to publish the unredacted cables, but he decided to do so," James Lewis QC said.

Lewis QC (for US Gov) essentially saying that defense teams arguments aren't relevant in an extradition proceeding- a matter for criminal trial in the United States. @SBSNews

But barrister Mark Summers, for Mr Assange, said the files and the password protecting them were already in the public domain, including on content-sharing website PirateBay.

The password was also the name of a chapter in Guardian journalist David Leigh's book about Mr Assange, published earlier in 2011.

"Far from being a reckless, unredacted release ... what actually occurred was that one of the media partners published a book in February 2011 and published the password to the unredacted materials, which then enabled the entire world to publish those unredacted materials in a book and they circulated on the internet, not on the WikiLeaks site, but on other sites," Mr Summers said.

"None of them have been prosecuted, some of which are US-based, all of them published first, some of them are still there."

The Guardian newspaper said Leigh had been told by Mr Assange the password was temporary and his book didn't say where the digital files were.

"No concerns were expressed by Assange or WikiLeaks about security being compromised when the book was published in February 2011," The Guardian said in a statement on Tuesday.

The @guardian's former investigations editor David Leigh on claims his book led to publication of US secret files: “It’s a complete invention that I had anything to do with Julian Assange’s own publication decisions. His cause is not helped by people making things up.”

Mr Summers said for months WikiLeaks had carefully worked to redact the files with media partners including The Guardian, Der Speigel, Le Monde, El Pais and the New York Times.

The US State Department had even been "feeding suggested redactions" to the media partners.

Mr Summers did not explain why Mr Assange decided to go ahead and publish the unredacted diplomatic cables in late 2011.

The US government is trying to extradite Mr Assange to face 17 charges of violating the US Espionage Act and one of conspiring to commit computer intrusion over leaking and publishing thousands of classified US diplomatic and military files.

The charges carry a total of 175 years' imprisonment.