Hubbard thanked the International Olympic Committee for "establishing that sport is something for all people, that it is inclusive and is accessible". 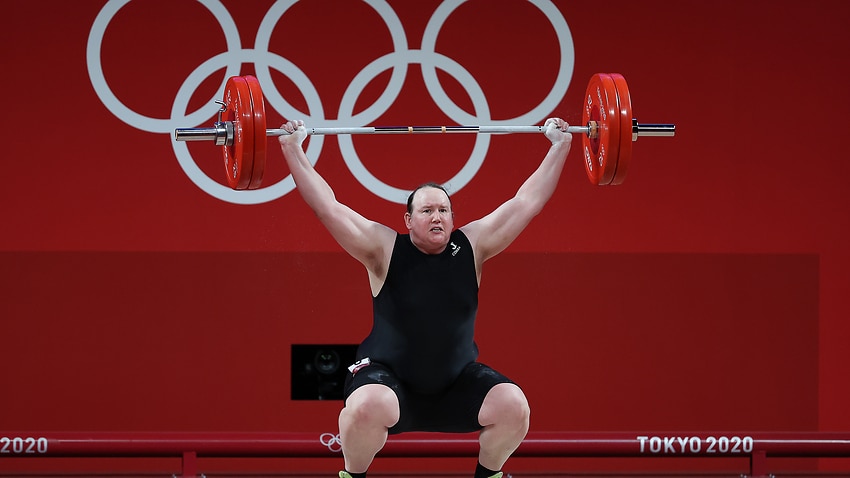 New Zealand's Laurel Hubbard made history on Monday by becoming the first openly transgender woman to compete at an Olympic Games, but she suffered a disappointing early exit from the +87 kilogram final after three no lifts in the snatch.

At 43, Hubbard was the oldest competitor in the weightlifting in Tokyo, in which her inclusion has ignited a fierce debate about fairness for women and about gender identification and inclusivity.

She joined Canadian football player Quinn in being among the first openly transgender athletes to compete. Quinn is assured a medal after Canada's semi-final defeat of the United States earlier on Monday.

But her landmark appearance in Monday's competition lasted just 10 minutes, with each of her first three efforts in the snatch ruled no lifts.

Hubbard walked confidently on to the stage, smiling amid yells of encouragement from an arena that was officially closed to spectators, but made busy by fellow athletes and a swarm of international media.

She cleared the bar above her head on the second attempt at 125 kg and there was a brief celebratory moment of triumph, clenched fists and loud cheers, but it was cut short by the judges who declared it a no lift.

She failed again in the decisive third attempt but stepped forward, to wave to the arena, hands clasped together in appreciation and an awkward smile as applause rang out.

"I'm not entirely unaware of the controversy which surrounds my participation at these Games," Hubbard told reporters.

"And as such, I would particularly like to thank the IOC, for I think really affirming its commitment to the principles of Olympism and establishing that sport is something for all people, that it is inclusive and is accessible."

Hubbard, who declined to answer questions, had been tipped for a medal in Tokyo having won a world championship silver in 2017 and Oceania championship gold in 2019.

She was twice the average age of her competitors, and a medal would have made her the oldest weightlifter to reach an Olympic podium by three years.

Nevertheless, some former athletes and women's rights advocates say that Hubbard had an unfair physiological advantage and that her competing in Tokyo undermined the struggle for greater equality for women in sport.

Trans activists argue, however, that hormone therapy puts athletes who make the transition at a performance disadvantage and say huge physiological differences already exist between competitors within men's and women's categories.

Under the IOC guidelines, transgender athletes can compete as a woman provided their testosterone levels are under 10 nanomoles per litre for at least 12 months before their first competition.

The IOC is reviewing those guidelines and aims to establish a framework that would allow sports federations to take decisions themselves on transgender participation.

'She had an uphill battle here'

There were words of encouragement for Hubbard and confidence that the IOC had made rules to ensure fairness.

"I was really sad she made three no lifts," said Austria's Sarah Fischer.

"She had a hard background and so many people wanted her to lose. She had an uphill battle here.

"Actually I wanted her to win a medal. That would be the best, then everyone would shut up about it."

Australian rival Charisma Amoe-Tarrant, who has warmly welcomed Hubbard's participation in her event, successfully snatched 95kg, 100kg and 105kg but sat out of the medal calculations ahead of the clean and jerk section.

Li's total of 320 kilograms was 37 kilograms more than that of Emily Campbell, who became the first British woman to win a weightlifting medal.