Kristina Keneally has been formally elected a federal senator during a joint sitting of the NSW parliament. 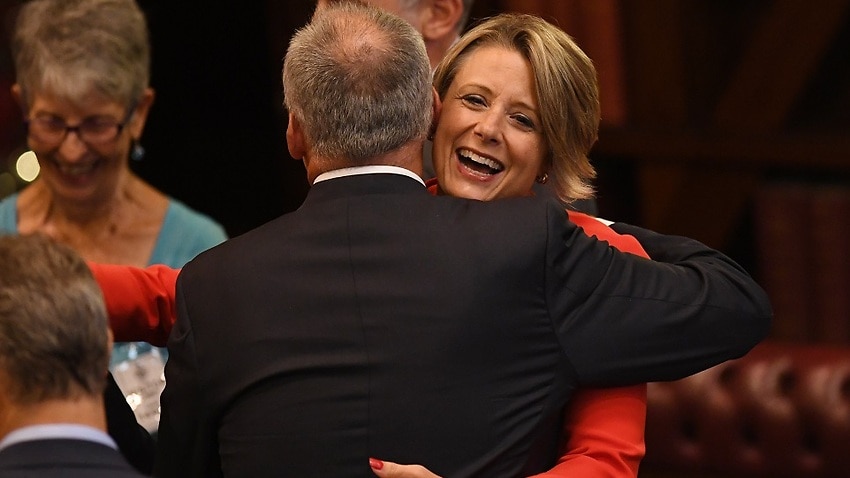 Former NSW Premier Kristina Keneally is Canberra bound after being formally elected a federal senator by a joint sitting of state parliament.

Ms Keneally, who was unsuccessful in her bid to win the lower house seat of Bennelong in a December by-election, was formally elected to the Senate on Wednesday afternoon.

Ms Keneally will replace Labor's Sam Dastyari who was forced to quit federal parliament over his controversial dealings with Chinese donors.

I am honoured, humbled and delighted to be endorsed by the NSW Parliament to represent our state in the Australian Senate. https://t.co/8GpksEQfGh

Labor MPs lined up to congratulate a smiling Ms Keneally after she was elected in what was at times a boisterous procedure.

"She's nobody's girl," one government MP shouted in the chamber, echoing Ms Keneally's first Question Time as premier when she rejected suggestions she was a puppet for ALP powerbrokers Eddie Obeid and Joe Tripodi.

Another coalition MP on Wednesday took umbrage with the Speaker's use of "honourable" in Mr Dastyari's formal title.

"He's not honourable," the MP called out.

Mr Dastyari formally resigned earlier this year in the wake of scrutiny over his dealings with a Chinese businessman and political donor.

Ms Keneally didn't stay long in Macquarie Street, telling reporters she was happy to be heading to the Senate where she's expected to be sworn in on Thursday.

"If you'll excuse me, I need to get to a plane," Ms Keneally said as she left the Legislative Council with her husband Ben and mother-in-law Jane.

She later tweeted: "I am honoured, humbled and delighted to be endorsed by the NSW Parliament to represent our state in the Australian Senate."

Ms Keneally's past came back to haunt her during her campaign against Liberal MP John Alexander for the seat of Bennelong.

The Liberal Party worked hard to remind voters of Ms Keneally's links to corrupt MPs such as Obeid and Tripodi.

Although she lost the by-election, Ms Keneally reduced the Liberals' margin by more than five per cent.