Nationals Leader John Barilaro is still causing headaches for the NSW coalition, with the fallout from the stoush over koala policy dominating state parliament.

John Barilaro is still causing headaches for the Berejikilian government with questions about his leadership and the fragile state of the Liberal-National coalition dominating question time in the NSW Parliament.

Tuesday's parliamentary sitting brought together all MPs for the first time since the Nationals leader threatened to blow up the coalition government last week over the state's koala protection policy.

Despite lingering tensions, Premier Gladys Berejiklian maintained the coalition was moving on from the public stoush. But NSW Labor leader Jodi McKay sought to capitalise on the political rift by moving a motion of no confidence against the deputy premier, saying he had threatened the stability of government in the midst of an unprecedented health and economic crisis.

The motion will be debated on Wednesday. During question time, the Labor opposition asked coalition MPs whether they stood by disparaging comments they had made about the Nationals leader last week.

Transport Minister Andrew Constance was defiant when asked about his remark last week: "Leadership is not what we saw on display".

In parliament he refused to step back from the slight.

"I will never, ever walk away from what I said," he said.

"There's been a dispute which should have been held at the kitchen table but it's on the front lawn."

The pair famously butted heads in May after both put themselves forward as potential candidates for the federal seat of Eden-Monaro. Both then dropped out of the race after it was revealed Mr Barilaro had called Mr Constance a c**t over his decision to run.

Liberal Police Minister David Elliott had also taken shots at Mr Barilaro last week, saying he had committed "the greatest act of political bastardry in quite some time" and his position was untenable. 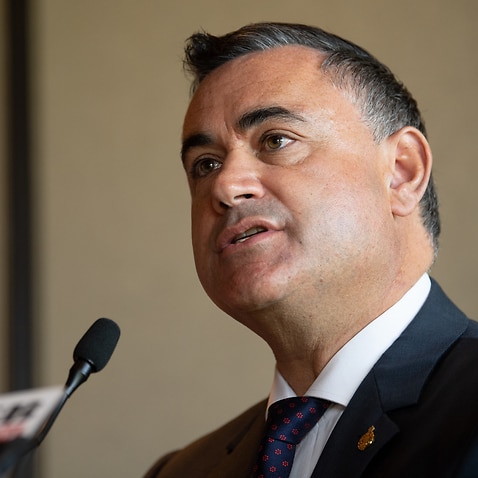 Mr Elliott would not repeat his barb in parliament, saying he was merely guilty of passionately defending his leader.

"Anything I needed to say on this matter is now on the public record and I don't need to come in here and repeat it," he said.

"I'm relieved we are all getting back to business, we need to put last week behind us," she told reporters.

Mr Barilaro last week threatened to march his Nationals colleagues to the crossbench if concessions on the koala policy weren't made.

He backed down after Ms Berejiklian gave him an ultimatum to support her government otherwise National ministers would be sacked from cabinet.

The Nationals are concerned changes to the Koala Habitat Protection State Environmental Planning Policy limit land use on farms and the ability to rezone areas for development as more trees are classed as koala habitat.

Clarence MP Chris Gulaptis, who was the first National to threaten to sit on the crossbench over the policy, has confirmed he will still walk if the policy isn't changed.