With Barnaby Joyce's eligibility in question, the Coalition is working on a list of Labor MPs to refer to the High Court over potential dual citizenship.

One of the Labor MPs accused by the Turnbull government of holding a potential dual citizenship has rubbished the allegation, telling SBS World News he lost his Italian citizenship by default when he became an Australian in 1958.

South Australian MP Tony Zappia was born in Italy in 1952 and won the federal seat of Makin in 2004.

The government has threatened it may refer at least four Labor MPs – including Mr Zappia – to the High Court, as the row over dual citizenship escalates.

"The Labor Party needs to produce the evidence or the government will obviously consider its options," Mr Pyne said. What's next for Barnaby Joyce?

Deputy prime minister Barnaby Joyce became the most high-profile politician to be embroiled in the scandal when news surfaced on Monday the Nationals leader is a New Zealand citizen.

If the High Court finds him invalidly elected, a by-election in Mr Joyce’s seat of New England could put the Turnbull Government’s one-seat majority at risk.

The government is now levelling allegations against a host of Labor members.

But Mr Zappia told SBS World News that he ceased being an Italian citizen on acquiring Australian citizenship in 1958.

Up until August 1992, Italian law did not allow dual citizenship, meaning Italian citizens who acquired another nationality lost their native citizenship status.

“The Italian Consul confirmed that is the case by letter dated July 2004, before my election to parliament,” Mr Zappia said.

“A copy of the Consulate letter has been provided to ALP national office.”

SBS World News has not seen the letter, but confirmed via the Italian consulate in Sydney that before 1992, Italians who became citizens of other nations automatically lost their Italian citizenship. Coalition accuses Labor of conspiracy to bring down government

The government has questioned whether Labor MPs Susan Lamb, Tony Zappia, Justine Keay and Maria Vamvakinou are all eligible to sit in the parliament under Section 44 of the Constitution, which prohibits parliamentarians from holding dual citizenship.

Mr Albanese said he had dealt with the allegation many times. “The circumstances of my birth is that I had a single parent, there is a single parent legally on my birth certificate,” he said on Monday.

Labor’s Tony Burke said the party was confident it did not have any dual citizens among its ranks, thanks to its detailed and “cumbersome” process for vetting the status of candidates.

“If the answer is yes to any of those, then a team of lawyers work with the candidate to make sure all the requirements of Section 44 have been met.”

Justine Keay, one of the other accused Labor MPs, has previously claimed she completed a form to renounce her UK citizenship May 23 last year.

She originally said she received a receipt in response on May 31 – just nine days before nominations for the 2016 federal election closed on June 9. But she later revised that timeline, saying she did not receive the reply confirming the renunciation until July 11, more than a week after the federal election. 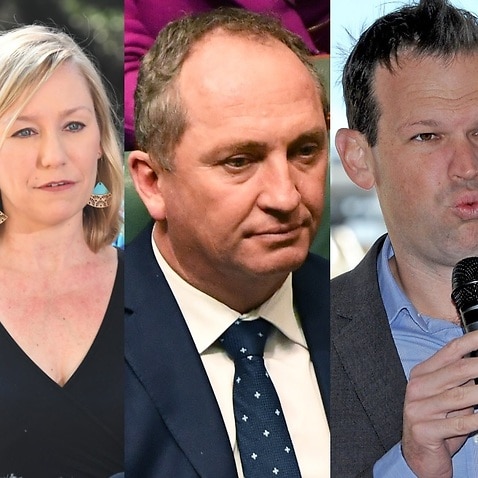 Susan Lamb told the 'Sunshine Coast Daily'she had taken all reasonable steps to renounce her UK citizenship in the lead-up to last year’s election.

“As part of my nomination, I was advised that I may have been entitled to UK citizenship through my father, who is deceased," she said.

“On 23 May 2016, I took all necessary steps to renounce by completing and sending the UK Home Office Form RN, ‘Declaration of Renunciation of British Citizenship’, and paying the requisite fee.”

“Australia Post confirmed the renunciation form was received by the UK Home Office in Liverpool on 25 May, 2016.”

“I was subsequently cleared to stand by the Labor Party, and nominated on 7 June 2016.”

Along with the Barnaby Joyce case, the High Court is considering the cases of two resigned Greens senators - Scott Ludlam and Larissa Waters - as well as LNP Senator Matt Canavan and One Nation Senator Malcolm Roberts, who are both remaining in their jobs until the cases have been heard.

SBS World News has contacted the office of Maria Vamvakinou, who is the first Greek-born woman elected to Australian parliament, for a response.

New agricultural visa will be extended to ASEAN countries before end of the year, government says

Why do Tamil asylum seekers need protection - and why does the Australian government say they don't?