Veteran SBS personality, Lee Lin Chin, has been nominated for two Logie Awards, including the coveted Gold Logie after nominations were announced on Sunday.

Longtime SBS World News presenter Lee Lin Chin will be vying for the Gold Logie for the most popular television personality against The Project co-hosts Carrie Bickmore and Waleed Aly, The Block host Scott Cam, Essie Davis from the ABC and Family Feud's Grant Denyer.

Her inclusion is the first time SBS has been in contention for the Gold Logie in the station's 36-year history, and caps off a successful campaign by SBS program, The Feed, who crusaded to have Ms Chin nominated by pushing the #LeeLinforLogiesWin hashtag.

She will also be vying for the Presenter award for her work on The Feed.

Ms Chin has held several posts since joining SBS in 1992, and currently hosts the weekend editions of SBS World News.

Couldn't think of a nicer person to be nominated for a gold Logie @LeeLinChinSBS! #LeeLinforLogiesWin #history #sbs pic.twitter.com/CWrplZe1nN

Alex Dimitriades was nominated for for Most Outstanding Actor for his role in SBS drama, The Principal.

With the nomination of two hosts of the Project, co-host of The Project, Peter Helliar, jokingly said there may be rivalry in the newsroom

"It's going to be very awkward at The Project for the next month," he said.

Bickmore said she was still on a high from last year's win and slapped down any talk of professional rivalry between her and Aly for the gong.

"I feel we need there to be a rivalry to fulfil everyone else's expectations," she said. "There genuinely is nothing."

Seven's 800 Words and Nine's Love Child both received nods for the viewer-voted best drama and peer-voted most outstanding drama series, as did Foxtel's A Place To Call Home.

Ky Baldwin, 14, star of Peter Allen: Not The Boy Next Door, was awarded the The Graham Kennedy Breakthrough Award.

Heaven help those who are nominated up against the formidable @LeeLinChinSBS https://t.co/mM90MdlyPJ

Most Outstanding Newcomers were named as 800 Words star Melina Vidler and Joel Jackson, for his role in Seven's mini-series Peter Allen: Not the Boy Next Door. 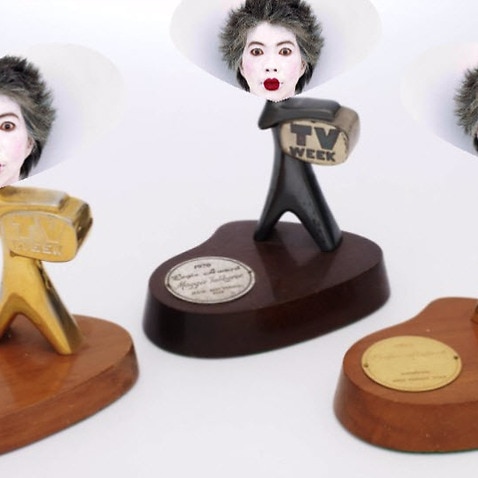 The best of Lee Lin Chin's Logies campaign ... so far Why don't I have a lover?: Lee Lin Chin & Meng Fei talk about their love lives * A Place to Call Home (Foxtel-SoHo)

* Home and Away (Seven Network)

* A Place To Call Home (Foxtel-SoHo) The Logies tank in the TV ratings

At last! Lee Lin Chin's fight to the death in Broadcast Battleground

* The Weekly With Charlie Pickering (ABC)

* Have You Been Paying Attention? (Network Ten)

The 58th Logie Awards will be presented on May 8 at Crown's Palladium Room in Melbourne.