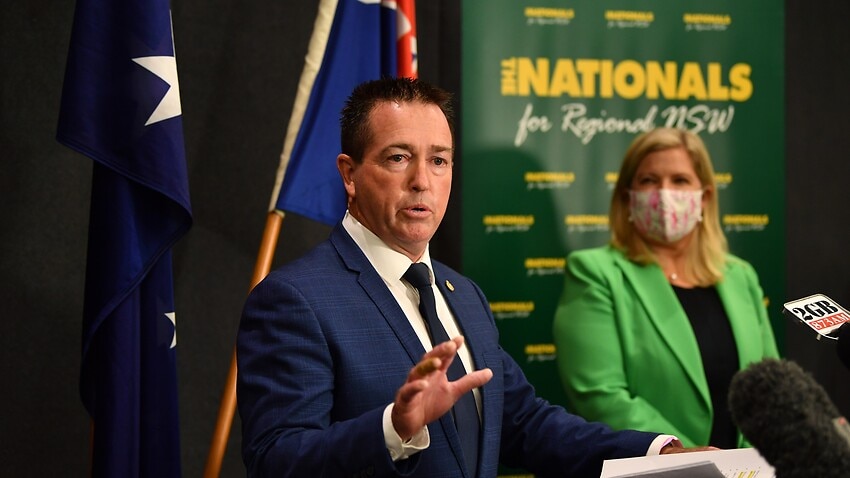 The NSW Nationals have appointed Paul Toole to replace John Barilaro as leader of the party and the state's next deputy premier.

His appointment comes after Mr Barilaro announced on Monday he would be stepping down as Nationals leader and leaving politics.

It also comes one day after Dominic Perrottet was sworn in as premier, following the sudden resignation of Gladys Berejiklian last Friday.

"I want to make sure we get back to work and it's business as usual because the people of this state have been doing it tough now for a number of years," Mr Toole told reporters, referencing the COVID-19 pandemic but also drought, bushfires and floods.

"What's important here is that we actually get on with the job."

Bronnie Taylor, an upper house MP and Minister for Mental Health, will become the first female Nationals deputy leader in the party's history.

Before entering state parliament in 2011, Mr Toole - a former school teacher - served as councillor for the Bathurst region for 16 years, becoming mayor in 2007.

Mr Toole is believed to have gained support because of his experience as a minister and time spent in the state's crisis cabinet during the COVID-19 pandemic.

He said he would be focused on helping to secure his state's reopening as NSW prepares to emerge from COVID-19 lockdown on 11 October.

“What we want to focus on is opening up this state - whether you are in the metropolitan areas or regional areas," he said.

He said his discussions would include ensuring appropriate quarantine arrangements to allow migrants to help fill worker shortages on farms.

"We need to make sure we've got those seasonal workers," he said.

"It is important we provide opportunities to get workers in to be able to go out and work on those farms."

Mr Barilaro on Monday said he had been planning to exit politics for some time, with his decision brought forward by recent resignations of Ms Berejiklian and Transport Minister Andrew Constance.

Mr Toole paid tribute to the outgoing Monaro MP, praising his passion and ferocity in his advocacy for constituents.

"He's a fighter and he's been a champion of the bush," Mr Toole said.

He added that he would also fight for the best interests of regional communities.

"I'm not going to shy away from a fight if there's a fight to be had," he said.

NSW Premier Dominic Perrottet congratulated Mr Toole for his appointment, labelling him a fighter and pragmatist who "knows what it takes to lead".

"The NSW Nationals have sent a strong signal that the NSW Liberals and Nationals will continue to build a better future for the bush with energy and optimism," Mr Perrottet said in a statement.