At the end of the movie ‘The Day After Tomorrow’, the survivors of a killer ice storm in New York City emerge slowly out of buildings into newfound safety and sunlight. That’s what Beijing felt like yesterday as the city woke up to the first healthy air seen in over a week.

For days, residents had been forced to live under hazardous smog. January 1 was a shocker, with pollution climbing as high as 24 times the level recommended by the World Health Organisation (WHO).

I woke up on Sunday, reluctantly reaching for my phone to check my air quality app.

I was expecting more bad news and was ready to stay in bed. Local magazines had just written about how Beijing had passed its worst week of air in recent memory, and many locals were unhealthier or angrier for it.

But not yesterday. The app read smog-free blue skies. The clouds had literally parted. Alleluia! I sprung out of bed, tore open the curtains, and in what felt like the first time in forever, I shut off my whirling air purifier and opened the windows. I was soon outside mask-less, relishing the wind on my naked face.

For those in Australia life under Beijing's smog is hard to describe. While audiences back home watch grey-coloured screens shaking their heads in disgust, I and most of my friends here grumble, don masks and prepare for a night-in with Netflix and home delivery. 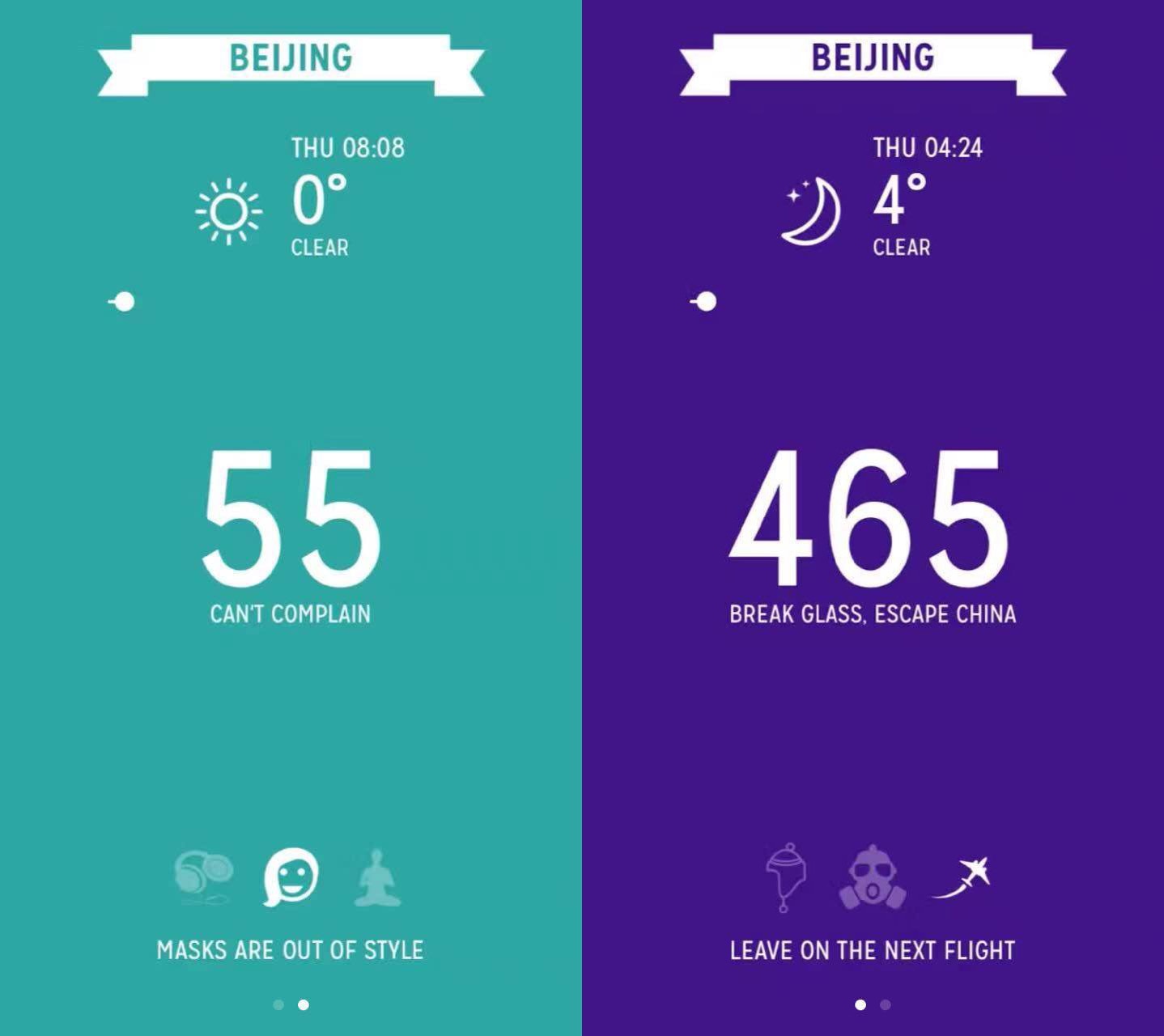 Readings from smartphone air quality monitoring app 'Airpocalypse' on a clear day, versus a day of severe smog.
SBS News

I've gotten used to treating it like really really bad weather, and investing in the sanctuary of home. It pays to be an avid fan of the Danish concept ‘hygge’, and today my modest apartment rivals any IKEA catalogue spread in the coziness stakes.

Everyone here has their own way of dealing with the smog. Humour is a common respite. People make wisecracks on Chinese social media, describing the day’s smog as having “tiramisu levels of thickness” or boasting that the dystopian movie 'Blade Runner'  got nothing on Beijing. Pubs offer 'airpocalypse happy hours' with two-for-one pints to try lure hibernating citizens out of the house on a smoggy Friday night.

"I like your mask, where’s it from?" has become a go-to ice breaker.

But this is all too easy for me to say. I'm one of the few in this third-world country who can afford first-world conveniences. China's entrepreneurs have been busy developing technology and services to cater to the privileged few. Owning air purifiers and monitors is one thing, but money buys other advantages.

The vast array of to-your-door services minimises reasons to leave air-purified spaces. Need groceries? Shoes fixed? Nails done? Someone will come to you and save you from venturing into the smog. And from experience the likelihood of this service worker wearing a protective mask themselves is pretty low.

And that’s a big problem. Everyone knows the smog makes us feel crappy, smells crappy, and even, at times, tastes crappy. But that’s far from the worst of it. Smog contains tiny airborne particles, “PM2.5,” which has been linked to health problems including lung cancer, asthma and heart disease.

According to UNICEF children are most vulnerable; they take in more air relative to their bodyweight and have undeveloped immune systems. A report released at the end of found that 450 million children in east Asia – mostly in China – were victims of toxic air. Thankfully, awareness is improving. This past week I've seen more people in masks than I have during my three- and-a-half years of living here. When I first arrived in 2013 a camera man I worked with told me on a smoggy day, "it's you foreigners who are fussy about the air. Us locals, we just happily go about our day".

Thanks to media coverage and the government’s coloured alert system (red = BAD) that's no longer the majority mindset. More and more Chinese are all too aware of how harmful the air pollution can be for them and their families.

In a show of parent-power last week, mums and dads rallied to demand that Beijing's government install air filtration systems in schools. Cancelling class every time there was severe smog was affecting their children's education and wasn't a long-term solution, they said. It's not often the Chinese government listens to voices of collective outrage, but in this instance they gave in.

It was a step forward. But it doesn't mean there isn’t work to be done. Last month a school principal came under fire for forcing students to take an exam outdoors in the terrible smog after the school was forced closed by a red alert.

The principal of a middle school in central China's Henan has been suspended for organizing outdoor exam in smog https://t.co/oZI9gMZtfe pic.twitter.com/u952suf0BC

Nationwide there is progress. Last week China’s energy agency announced plans to spend almost than $500 billion by 2020 weaning the country off dirty coal power (the leading cause of air pollution) and onto clean energy sources like solar and wind. In response Greenpeace described the “world-leading levels of investment in renewable energy” as putting the country “on the path of a steady energy transition".

But coal isn’t going anywhere. “World-leading” or not, during that period renewables will still only account for just 15 per cent of overall energy consumption and more than half of the China’s installed power capacity will be fueled by coal.

#Fast #Train #高铁 made #dirty through #smog and #pollution in #China. Travelled from #Shanghai to #Beijing through the #Airpocalypse. #空气 #中国 pic.twitter.com/V4Ci6HrAqf

So while Beijing residents hold on to heartening state media news that 2016 had a walloping 12 more blue-sky days compared with 2015, no one’s burning their face masks just yet. China’s cities will continue to remain under siege by smog, especially in the winter.

As for Aussie expats like myself who have chosen to make our lives here in China, we just hang tight till it passes. We compete for the 'most depressing smog pic' and huddle together in collective glum, envying the Facebook posts of friends back home on the beach or at a bbq, asking ourselves what the hell we were thinking when we up and left.

But then again, if we never did we wouldn’t experience living in a country in the midst of such dramatic transformation, or learn to appreciate something so simple as a clear blue sky.

And did I mention 'Blade Runner' has got nothing on us? 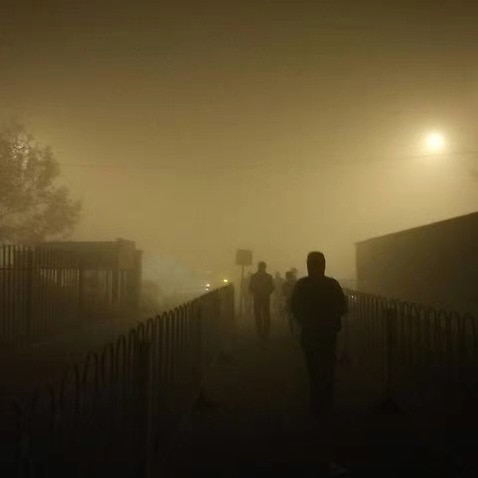 Highways, schools closed as parts of China blanketed by smog and fog 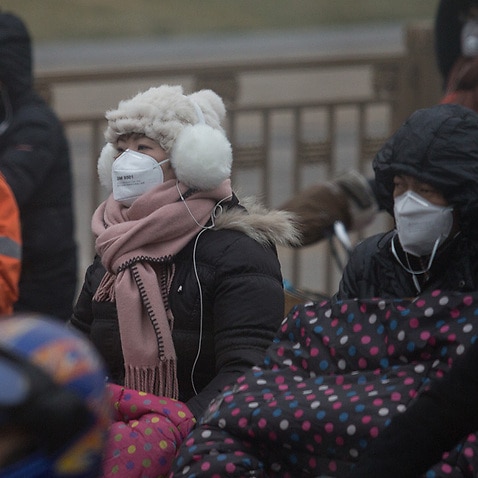