The Islamic State group claimed responsibility Sunday for an attack by knife-wielding men who mowed down and stabbed revellers in London, killing seven people before being shot dead in a barrage of police gunfire.

Saturday night's rampage at a popular nightlife hub around London Bridge by three men wearing fake suicide vests was the third deadly terror attack in Britain in less than three months and came only days before a general election.

"A detachment of fighters from Islamic State carried out London attacks yesterday," said the Aamaq news agency, which is affiliated with the Islamic  State group. National campaigning for Thursday's vote was suspended for the day out of respect for the victims, who included 48 people treated in hospital for injuries.

Of those, 21 are still in a critical condition.

No details have been released about the perpetrators, who were shot dead within minutes by police.
0:00
Share

Eight officers fired an "unprecedented" 50 rounds at the three attackers, according to Mark Rowley, head of national counter-terrorism policing, who said that a member of the public also suffered a gunshot wound.

Detectives were still investigating whether the assailants acted alone, and Rowley said their identities would be released "as soon as operationally possible".

Police launched raids in the ethnically diverse London suburb of Barking in the hours after the rampage, arresting seven women and five men aged between 19 and 60 at two properties.

A 55-year-old man was later released. 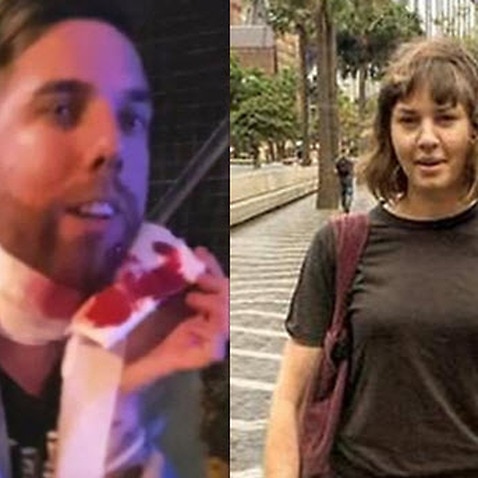 May said the attack was driven by the same "evil ideology of Islamist extremism" behind last week's Manchester suicide bombing that left 22 people dead, and the Westminster attack in March, which killed five.

"The recent attacks are not connected but we believe we are experiencing a new trend in the threat we face," she said after chairing an emergency ministerial meeting.

She warned that perpetrators are inspired to attack "by copying one another".

The assailants ran people over on London Bridge before lunging seemingly at random at the crowds gathered around Borough Market, which is full of restaurants and bars.

Gerard Vowls, 47, said he saw a woman repeatedly stabbed, and threw chairs, glasses and bottles at the attackers in a bid to stop them.

"They kept coming to try to stab me... they were stabbing everyone. Evil, evil people," he told The Guardian newspaper.

Another witness called Eric told the BBC he had seen three men get out of the van and thought they were going to help tend those who had been run over.

Instead they "started kicking them, punching them and took out knives. It was a rampage really," he said, adding that he heard a shout of: "This is for Allah".

An Australian was among those hospitalised, while a Spaniard escaped with light injuries.

French Foreign Minister Jean-Yves Le Drian is due to visit Britain on Monday to speak to the injured French nationals, after President Emmanuel Macron said France was "more than ever at Britain's side".

Among those stabbed was a London Transport Police officer, who was one of the first responders on the scene and received injuries to his face.

A vigil for the victims will take place at nearby Tower Bridge on Monday evening.

'I was just trying to save people's lives': witness

Britain was already on high alert following the recent attack on a concert by US pop star Ariana Grande in Manchester, northwest England, in which seven children were among the dead.

Grande, who headlined a benefit concert in Manchester on Sunday, alongside stars including Pharrell Williams and Justin Bieber, tweeted that she was "Praying for London".

"A lot of people suffered and I had some second thoughts coming, especially with what happened last night in London," ticket holder Abdullah Mala, 34, told AFP. "But we got to move on".

The national threat level was raised to maximum after the Manchester attack and troops were deployed at key public sites, but reduced to its second highest level last weekend.

Prime Minister May, who served as interior minister for six years before taking office after the Brexit vote last summer, said Britain's response to the terror threat must change.

"We cannot and must not pretend that things can continue as they are," she said, adding there was "far too much tolerance of extremism in our country."

The ruling Conservatives and the main opposition Labour party suspended national campaign events for the day, but May insisted the election would go ahead as planned on Thursday.

People moving from the scene at London Bridge

Saturday's rampage is the latest in a string of attacks to hit Europe, including in Paris, Berlin and Saint Petersburg, and the French, German and Russian leaders sent messages of support.

US President Donald Trump offered his help, tweeting "WE ARE WITH YOU. GOD BLESS!" -- and highlighting his thwarted ban on travellers from six mainly Muslim countries. Several people said they were ordered by police to stay inside pubs and restaurants as the terror raged outside late Saturday.

Alex Shellum at the Mudlark pub said a woman had come into the bar "bleeding heavily from the neck", telling the BBC: "It appeared that her throat had been cut."

Italian photographer Gabriele Sciotto, who was watching the European Champnions League football final at the Wheatsheaf pub in Borough Market, said he saw three men shot just outside the premises.

"In two or five seconds, they shot all the three men down," Sciotto told the BBC.

The rampage had harrowing echoes of the attack on Westminster Bridge in March, when British Muslim convert Khalid Masood rammed his car into pedestrians before crashing into the barriers surrounding the parliament building.

He stabbed a police officer to death before being shot dead by a ministerial bodyguard.