Dozens of properties around NSW have been destroyed and an elderly man is missing after catastrophic bushfires ripped through towns and rural areas.

An elderly man whose home was consumed by flames is missing and dozens of properties have been damaged or destroyed by bushfires which raged during a heatwave NSW day.

At least two more were razed near Batemans Bay on the south coast and others southwest of Sydney.

The destruction around Balmoral and Bargo caused by the aggressive Green Wattle Creek fire follows the loss of up to 40 homes in the area on Thursday.

Two Total Fire Bans are in place from midnight tonight for the Northern Slopes and North Western areas.
Fire conditions across NSW will ease tomorrow.
More information is available at https://t.co/GVo02DSaWu#nswrfs #nswfires pic.twitter.com/hyjFtEPd3y

Mr Fitzsimmons said an elderly man who refused to leave, choosing to stay and defend his residence in Dargan, east of Lithgow, was unaccounted for.

"There are some reports that the property is now enveloped by fire and we cannot locate that man. We're hoping that he has chosen to relocate somewhere but we just do not know," he told reporters. The man was last seen in the Dargan area, near Lithgow, while several nearby buildings were destroyed.

The Rural Fire Service confirmed homes had already been damaged or destroyed in the Lithgow area as embers appeared. At least five of them, according to the ABC.

At 8pm on Saturday, there were four NSW fires burning at an emergency warning level. They included the 460,000-hectare blaze at Gospers Mountain, the 130,000-hectare Currowan fire on the south coast and the 189,000-hectare Green Wattle Creek fire.

A fire at Palmers Oaky, west of Gospers Mountain, was also at emergency level.

Fears the southerly winds moving upstate during the evening would fan fires in new directions had come to pass, Mr Fitzsimmons said.

He said it would be a number of hours before the erratic fire behaviour prompted by the change gave way to milder firefighting conditions for the 3000 crews and emergency personnel in the field.

Conditions were so dry cooler conditions may also have little effect.

"On the far south coast, we are seeing a betterment behind the change but it will take a long time for behaviour to settle once that change has moved through so we've still got a long night ahead," Mr Fitzsimmons said.

Some locals have stayed in the area to battle the Gospers Mountain blaze. Amid mounting criticism, Scott Morrison is flying home to address the bushfires

Max Hawken is 82 and has lived in the modest Lithgow miner's cottage he'll defend from the Gospers Mountain megafire for 56 years.

As smoke from fire-hit Dargan and Bell drew close on Saturday afternoon, Mr Hawken drove wife Janice, 76, to Lithgow Workies Club near which embers were also falling as fire broke safety lines behind the venue.

But he returned to help defend their Vale of Clwydd home. 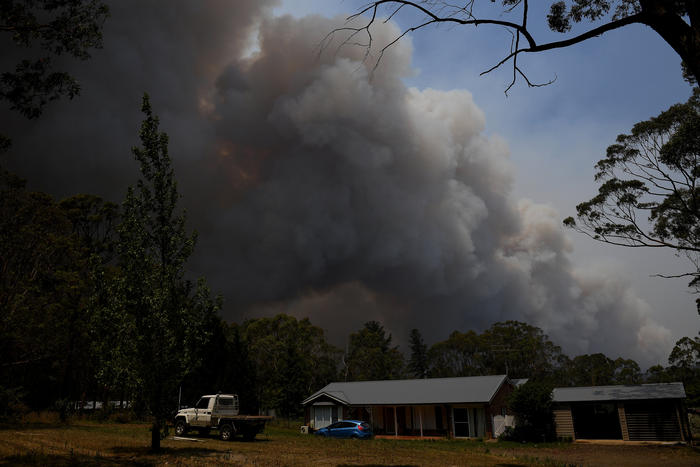 "I have put the sprinklers ready all around the roof," Mr Hawken said as he showed AAP the plastic hoses attached to a sprinkler that he will manually turn on if the embers reach his street.

"This fire will be one of the worst we have if this town burns.

Mr Hawken said he had defended his cottage several times over the more than half a century he'd lived in it and was ready to again.

He and several others in the Lithgow area had decided to stay put as the western edge of the Gospers Mountain fire - still out of control and more than 450,000 hectares in size - intensified.

The fire continued to burn south of the Bells Line of Road, with an imminent southerly on Saturday expected to make fire behaviour erratic. 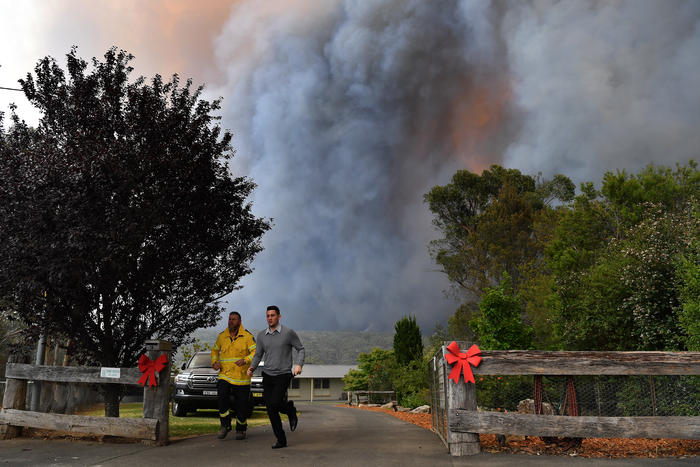 Elizabeth Attwood, 56, lives next door to Mr Hawken on Hartley Vale Road and said she was also staying to secure her 100-year-old sandstone cottage.

"RFS has told us to leave now but we are staying. We'll be right," she said.

Meanwhile, a contingent of 30 firefighters from Canada arrived on Saturday and will go to work battling the blazes as early as Sunday.

NSW Ambulance chief executive Dominic Morgan said a number of firefighters suffered heat exhaustion on Saturday while battling the fires, which were having a "big impact" on-demand for emergency services.

One firefighter was treated for smoke inhalation near Lithgow and another was struck by a car at Gospers Mountain.

The potentially "catastrophic" conditions across the state also meant firefighters had little time to mourn the loss of two volunteers who died in the Green Wattle Creek blaze on Thursday night. 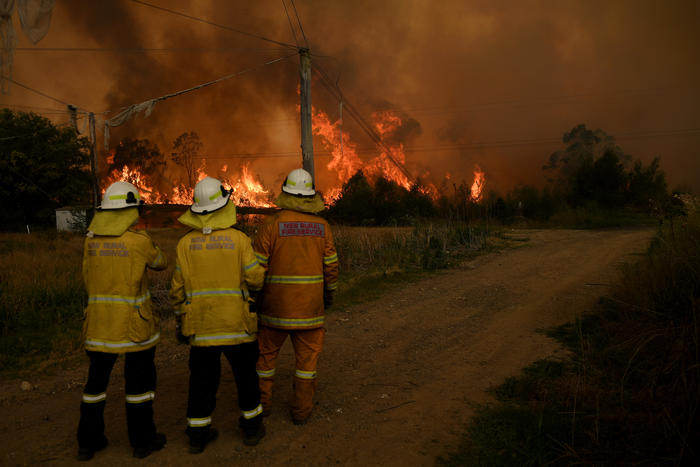 "The NSW police message to motorists is today is not the day to start your holiday," she told reporters at NSW Rural Fire Service headquarters.

"Delay your travel until tomorrow.

"Conditions will be much milder and you can have a better trip."