March4Justice: Women across Australia are set to rally against violence and misogyny

Australian women are set to hold rallies in 36 locations across the country on Monday, with calls including independent investigations into cases of gendered violence. 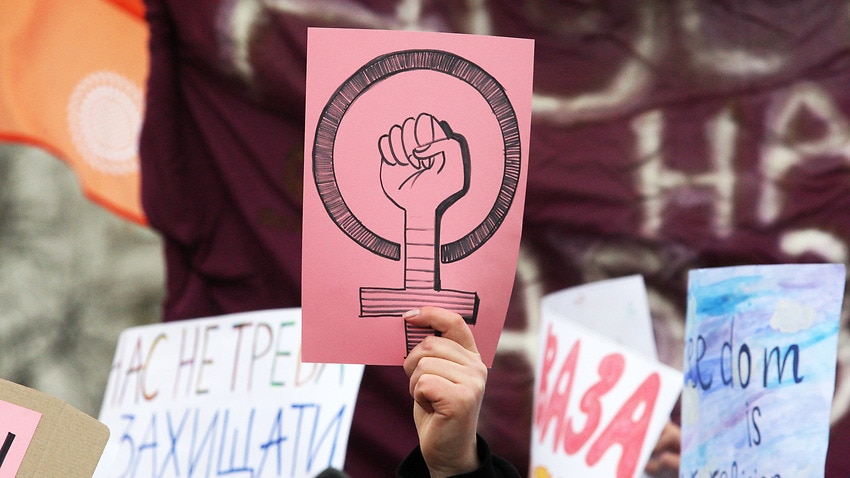 A woman holds a placard with a symbol of feminism during the feminist's Women March which is dedicated to International Women's Day in downtown Kiev. Source: Sipa USA Pavlo Gonchar / SOPA Images/Sipa

Thousands of women are expected to march across major cities and small towns on Monday to protest against misogyny and alleged sexual abuse in Australia's parliament.

Janine Hendry is the founder of the March 4 Justice protest, which was established in the wake of reports of an alleged rape at Parliament House against former staffer Brittany Higgins, and the historical rape allegations levelled against Attorney-General Christian Porter.

“The anger and frustration welled up inside of me," Ms Hendry told SBS News. "Because ultimately these issues of sexual abuse are arising because of a fundamental systemic inequality that exists in our society."

The movement has grown rapidly, and with over 28,000 followers on Facebook. Protests have been organised in 36 locations around the country.

"I knew there was anger, but I didn’t know how widely spread that anger was. Women have had enough. We have been pushed over the precipice and I for one am not going to give up until we get some real structural change."

Janine Hendry is the founder of the March 4 Justice protest. Source: Supplied

The protest features a list of demands, including independent investigations into cases of gendered violence and the full implementation of the Australian Human Rights Commission’s Respect at Work report.

Every member of federal parliament has been invited to attend the march.

Mr Morrison told the media on Sunday he would not go because "when you're prime minister in Canberra, it's a very busy day" but said he would "very happy to receive a delegation" privately in his office.

He has offered, alongside Minister for Women Marise Payne, to meet up to four of the protest organisers in his office on Monday afternoon.

Earlier Minister Payne said she would receive the protesters' petition "via correspondence" rather than in person.

Mr Morrison said violence against women "continues to be a very high priority of my government".

"The issue of dealing with violence against women and families, these are things that should be bipartisan in this country, and in most of my parliamentary experience they have been and should be."

"And so I understand there is great feeling, and understandably so on these issues. And what we need to keep focusing on is the protections, and the resources and the programs that we're putting in place."

Ms Hendry however Tweeted on Monday morning that a protest delegation would not meet with the government "behind closed doors".

"We have already come to the front door, now it's up to the Government to cross the threshold and come to us. We will not be meeting behind closed doors," she said.

We have already come to the front door, now it’s up to the Government to cross the threshold and come to us. We will not be meeting behind closed doors.

Mr McCormack said he appreciated the issue was important but said he had a duty to respect prior commitments.

"I've already got commitments that I will meet, and I believe if you make commitments, then you should stick to those," he told the ABC’s Insiders program.

"I appreciate that this is an important issue and I understand, part of democracy, that people have their right to march and protest, and of course any submission or thing that they want to take forward."

Over a thousand people gathered in central Perth before marching through the streets of the city chanting slogans such as "Enough is enough" and singing feminist anthems.

Speakers took to the stage to share their own stories of sexual violence.

Lisa Chatwin, a social worker in the Western Australian town of Bunbury, said she got involved after being added to the Facebook group. She is now organising the local protest in her town.

"It has been really inspiring," she told SBS News. "It’s been really lovely to see women supporting women, to see people who have been victims - or family or people who know victims - having the opportunity to be supported and have their experience validated.

"It's really important that we change the conversation for victims who are dealing with sexual assault.

"Take away that doubt and replace it with 'I support you, because I believe you'."

Ms Chatwin, who herself is a victim of domestic violence and marital rape, said the emphasis and the conversation around Australia needed to shift towards believing victims of abuse.

Ms Hendry said the March 4 Justice event was just the beginning of a movement that will continue.

"This is not going to go away for the government. I think what is happening in Australia, with this visceral anger from women is actually an incredibly pivotal moment in time.

"Women are saying we want change and this change has to happen now."