Far-right leader Marine Le Pen wept for joy when her father Jean-Marie Le Pen, the bogeyman of French politics, made it to the final of the 2002 presidential election.

But while Le Pen senior ultimately failed to win the top job, 15 years later his charismatic daughter believes she can become France's first woman president, and the first from the far-right National Front (FN).

In the first round vote, the fiercely anti-EU, anti-immigration Le Pen secured a spot in the May 7 run-off, just behind centrist Emmanuel Macron, according to several polling institutes.

But even her supporters admit she faces a tough challenge, with her younger rival  tipped to appeal to a broader spectrum of voters.

Her backers would clearly have preferred her to have come first Sunday -- or at least to be facing someone other than Macron in the run-off. "Macron is more complicated," one Le Pen supporter said.

She also goes into the runoff with several investigations hanging over the FN and her entourage for alleged funding scandals, while she is also being probed after tweeting pictures of Islamic State atrocities. Over the past six years, Le Pen's rebranded "party of patriots" has gone from strength to strength, propelled by the kind of anti-globalisation, anti-establishment fury that drove Britain's vote to leave the EU and Donald Trump's election in the United States.

Le Pen has predicted the EU "will die" and has vowed to take France out of the euro and hold a referendum on membership of the union.

The proposal has caused alarm, with most polls showing the French against a "Frexit" or a return of the franc, fearing economic chaos.

Le Pen has downplayed the risks, accusing sceptical rivals and economists of scaremongering.

But she never strayed far from the FN's stock themes of immigration and Islamic fundamentalism -- hot-button issues after a string of jihadist attacks that have killed 239 people since 2015, including a policeman shot dead on Paris's Champs Elysees three days before the election.

"With me there would never have been the migrant terrorists of the Bataclan," she told supporters in the final days of the campaign, referring to the Paris concert hall where dozens were killed in the November 2015 attacks. 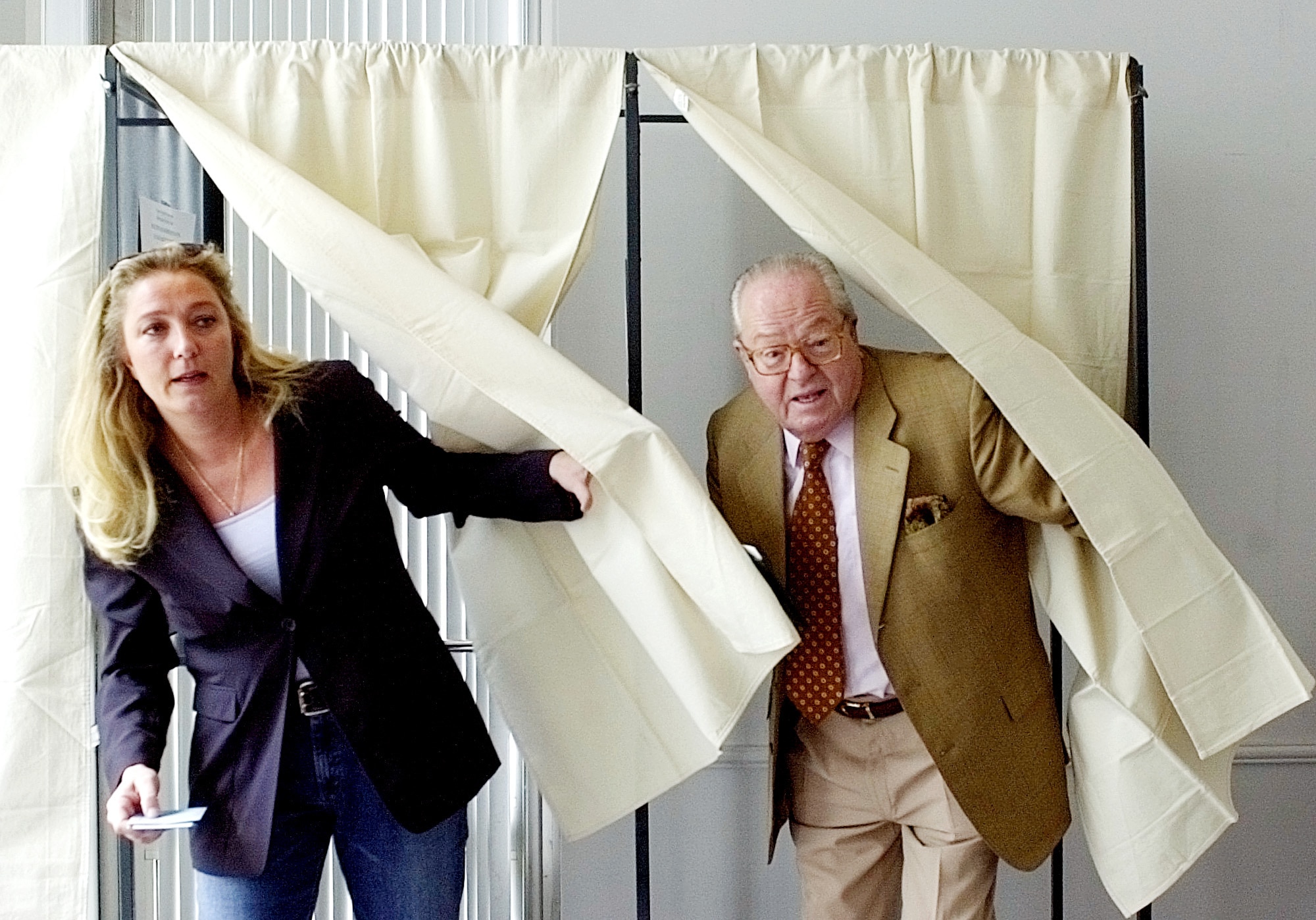 Le Pen launched a drive to detoxify the FN's image on taking over the leadership in 2011 -- propelling the party to victory in European elections in 2014.

In the last presidential election in 2012 Le Pen finished third with just under 18 percent.

On the campaign trail this year, she returned to the party's fundamentals, saying France bore no responsibility for an infamous round-up of 13,000 Jews in Paris during World War II by police acting on orders from the collaborationist Vichy regime.

Her remarks drew comparisons with the revisionism of her father, whom she kicked out of the party in 2015 for describing the Holocaust as "a detail of history".

A wounded Jean-Marie refused to go quietly, dragging the FN before the courts.

The split marked a turning point in the career of Marine Le Pen, who developed a tough shell after a tumultuous childhood.

When she was eight, a bomb ripped through the Paris apartment building where the family lived, slightly injuring six people but sparing the Le Pens.

"It was a huge shock," Le Pen, who did not see her mother for 15 years, told a French television interviewer last year.

When she was eight, a bomb ripped through the Paris apartment building where the family lived, slightly injuring six people but sparing the Le Pens.

Now herself a twice-divorced mother-of-three, she keeps her private life out of the spotlight, appearing rarely as a couple with her partner, FN vice-president Louis Aliot.

The politician with the gravelly voice and flair for sharp putdowns started out as a lawyer defending illegal immigrants facing deportation as a state-appointed attorney.

Despite that experience she blames migration -- and the European Union -- for France's economic woes. The FN has come a long way since it was launched in 1972 as a refuge for paramilitaries who opposed France granting independence to Algeria.

It also drew apologists for the wartime Vichy regime's collaboration with Nazi Germany and ultra-conservative Catholics.

Critics, however, point to the role of several Le Pen aides who were once part of violent nationalist student groups -- and the recurring chant of "This is our land" at FN rallies -- as evidence that it still attracts hardliners.

Like Trump, Le Pen is proposing to pull up the drawbridge and restore French glory with a policy of "economic patriotism".

Besides leaving the euro she wants to pull out of Europe's Schengen border-free area, adopt a French-first policy on jobs and public housing and tax products from French companies that offshore factory jobs by 35 percent.