Thousands have participated in protests across the country to mark January 26 as 'Invasion Day'.

More than a thousand demonstrators have marched in Sydney on Australia Day to mourn the "day of killing" that accompanied the landing of the First Fleet 228 years ago.

Chanting "always was, always will be Aboriginal land", protesters clad in Indigenous colours marched from The Block in Redfern, where speeches and dances were performed and poems recited, to the CBD on Tuesday morning.

#InvasionDay needs to be acknowledged before we can move forward- How do our two peoples come together?

After stopping for speeches at Town Hall, and the unsuccessful burning of an Australian flag, the march followed the original route of the 1938 'Day of Mourning' protest to Australian Hall.

It's the first time since 1938 Indigenous Australians have gathered at the Elizabeth St hall on January 26.

January 26, he said, was a day of invasion to Indigenous Australians.

"This is the day war was declared by the British on all Aboriginal nations, all tribes," Mr Canning told AAP.

"I don't mind them having Australia Day but they can have it on January 1.

"Because it is the day of what I call 'the killing times'."

Mr Canning said January 26 was also a day in which Indigenous Australians celebrated their warrior ancestors.

He said Indigenous communities need to be provided with autonomy and self-governance, separate from the Australian parliament.

"We need full and total control of our own destiny," he said.

At the pre-march rally in Redfern, local Greens MP Jenny Leong said the push for Indigenous self-determination needed to continue.

She hoped a day would come when the social and economic disadvantages of Indigenous Australians could be seen as "horrible, ancient stories of the past".

"It is days like this, and crowds like this, and the solidarity we feel when we gather, that we must take as a way to strengthen our resolve," Ms Leong said in her speech.

Indigenous rights activist Jenny Munro demanded indigenous people be given the right to express their own culture and law.

Living with gratitude on Kaurna land - always was and always will be. #SurvivalDay #InvasionDay

"The sanctity of our families must be honoured and our children will not be taken away," Ms Munro said.

"We have the right to practice our own religion, to speak and educate our children in our own languages, the right to live our culture.

"The land is our mother."

Hundreds of Aboriginal activists and supporters have rallied at Queensland's Parliament House in an
Invasion Day protest for indigenous rights.

The crowd gathered outside state parliament to express their opposition to the celebration of the national day on January 26, which was variously described as "Invasion" or "Survival Day".

Many wore the Aboriginal flag on T-shirts and brandished banners proclaiming the sanctity of Indigenous land rights.

"Resisting Terrorism since 1788," one large poster read, with others decrying forced removal of children from traditional communities.

Speaker Ruby Wharton gave an impassioned address in which she recalled walking alongside Invasion Day protesters as a three-year-old child.

"We're walking in their footsteps today, we're chanting the exact same things they did - 10, 20, 30, 40 years ago," she told the crowd, praising similar rallies in Sydney and Melbourne.

"Today is not a day to be holding your head down. You hold your head up."

Participants heard the site of the protest - the speaker's corner at the edge of the Brisbane City Botanic Gardens - was a traditional dreaming site of local Indigenous women.

Adrian Burragubba, who has led a campaign against the Carmichael mine development on behalf of the Wangan and Jagalingou traditional owners, also spoke at the rally. 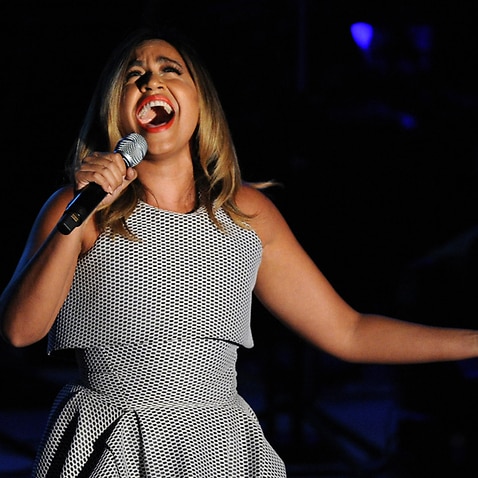 "Our ancestors are still alive in the land. We did not consent, we have not consented," he said.

He concluded his speech with some choice words for the Adani corporation: "Take your mining company back to India."

She said a relative had painted an Aboriginal flag onto a mining conveyor belt on the island in a sign of resistance to the commercial venture.

Speeches ended with a short dance performance and the lowering of the Aboriginal flag from the posts outside state parliament.

"Always was, always will be, Aboriginal land," the crowd chanted as they filed into the CBD en route to Musgrave Park at South Brisbane.

More than 150 people have gathered near Parliament House in Melbourne at a protest condemning Australia Day.

The Invasion Day protest, organised by the Warriors of the Aboriginal Resistance, rejects moves to recognise indigenous people in the constitution.

Organiser Meriki Onus says the grassroots Aboriginal community wants to control its own politics, and is saying 'no' to the recognition campaign.

Outside Tasmania's Parliament House in Hobart a wreath was laid to commemorate the Indigenous people killed as the result of white settlement. About 500 protesters called on Premier Will Hodgman to pressure the prime minister to change the holiday.