Iraq's Kurds announced a massive 'yes' vote for independence on Wednesday following a referendum that has incensed Baghdad and sparked international concern.

Longtime Iraqi Kurd leader Massud Barzani said the vote would not lead to an immediate declaration of independence and should instead open the door to negotiations.

But Iraqi Prime Minister Haider al-Abadi told lawmakers on Wednesday there was no question of using its results as the basis for talks.

"The referendum must be annulled and dialogue initiated in the framework of the constitution. We will never hold talks based on the results of the referendum," Abadi said. Celebrations in Erbil after the Iraqi Kurd referendum.
AAP

"We will impose Iraqi law in the entire region of Kurdistan under the constitution," he said.

Pressure has been mounting on the Kurds since the vote, not just from Baghdad but also from Ankara, with Turkey threatening a range of measures including cutting off key export routes for the region.

An overwhelming "yes" vote had been widely expected from the electorate of 4.58 million.

Pursuing a long-cherished dream of statehood, the Kurds went ahead with the referendum in defiance of widespread objections, including from the United Nations and United States.

It has raised fears of unrest and the possibility of a military confrontation involving the Kurds, who are key allies in internationally backed offensives against the jihadists of the Islamic State group. 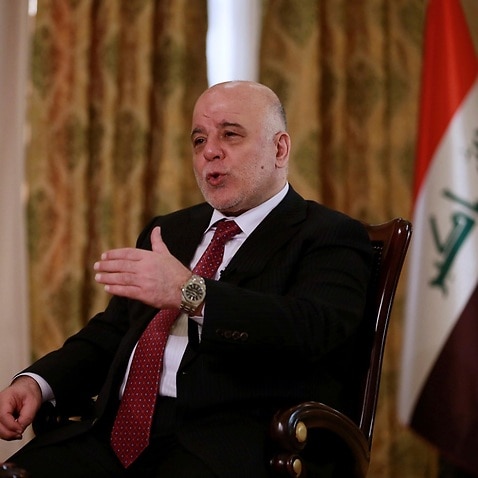 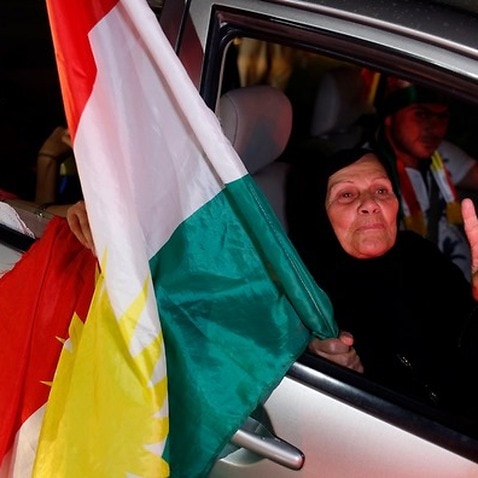 In a televised address late on Tuesday, Barzani had urged Abadi "not to close the door to dialogue because it is dialogue that will solve problems".

"We assure the international community of our willingness to engage in dialogue with Baghdad," he said, insisting the referendum was not meant "to delimit the border (between Kurdistan and Iraq), nor to impose it de facto."

Baghdad has steadily pushed back against the vote.

Lawmakers on Wednesday passed a resolution calling on Abadi to "take all necessary measures to maintain Iraq's unity" including by deploying security forces to disputed areas.

The resolution also called for the closure of border posts with Turkey and Iran that are outside central government control.

Abadi said Tuesday he would ban all international flights to and from Kurdistan in three days unless airports in its main cities Arbil and Sulaimaniyah were placed under his government's control.

Airlines from Turkey as well as Egypt, Jordan and Lebanon said Wednesday they will halt flights to and from Iraqi Kurdistan this week until further notice at the request of Baghdad.

Turkey fears the vote will stoke the separatist ambitions of its own sizeable Kurdish minority and on Tuesday President Recep Tayyip Erdogan warned that Iraq's Kurds risked sparking an "ethnic war".

"If Barzani and the Kurdistan Regional Government do not go back on this mistake as soon as possible, they will go down in history with the shame of having dragged the region into an ethnic and sectarian war," he said. Kurds celebrate after the announcement of the results of the independence referendum in Erbil, Kurdistan region in northern Iraq, 26 September 2017.
AAP

Erdogan had earlier warned that Turkey would shut its border with Iraqi Kurdistan and threatened to block oil exports from the region through his country.

Erdogan even suggested the possibility of a cross-border incursion similar to the one Turkey carried out against IS and Kurdish fighters in Syria.

Monday's vote took place across the three northern provinces of autonomous Iraqi Kurdistan -- Arbil, Sulaimaniyah and Dohuk -- and in disputed border zones such as the oil-rich province of Kirkuk.

Opponents have accused Barzani of seeking to empower himself through the vote, and said he should have accepted a UN-backed plan to postpone the referendum in favour of negotiations with Baghdad. A man waves the Kurdish flag in the streets of Irbil after polling stations closed on Monday, Sept. 25, 2017.
AAP

Iran, which also has a large Kurdish minority, condemned the vote as well and on Sunday stopped all flights from its territory to and from Iraqi Kurdistan.

Analysts say that despite their threats, Baghdad, Ankara and Tehran are proceeding cautiously in reacting to the vote, wary of sparking a serious confrontation with the Kurds that would further destabilise an already volatile region.

Closing their borders with Iraqi Kurdistan would also hurt Turkey, which exports more than $8 billion worth of goods every year to the region, and Iran, which exports about $6 billion.

Left without a state of their own when the borders of the Middle East were redrawn after World War I, the Kurds see themselves as the world's largest stateless people.

The non-Arab ethnic group of between 25 and 35 million is spread across Iraq, Iran, Turkey and Syria.