There is a very real chance a grounded and damaged tanker off the coast of Mauritius could split, spilling 2,500 tonnes of oil.

Salvage crews are racing against time to prevent a second disastrous oil spill off the picture-perfect coastline of Mauritius, with a damaged tanker carrying thousands of tonnes of fuel at risk of splitting apart.

The bulk carrier MV Wakashio ran aground on 25 July with 4,000 tonnes of fuel aboard and began seeping oil last week, staining coral reefs, mangrove forests and tranquil lagoons in an unprecedented environmental catastrophe for the archipelago nation.

More than 1,000 tonnes has already oozed from the ship, its Japanese operator says, causing untold ecological damage to protected marine parks and fishing grounds that form the backbone of Mauritius' economy. 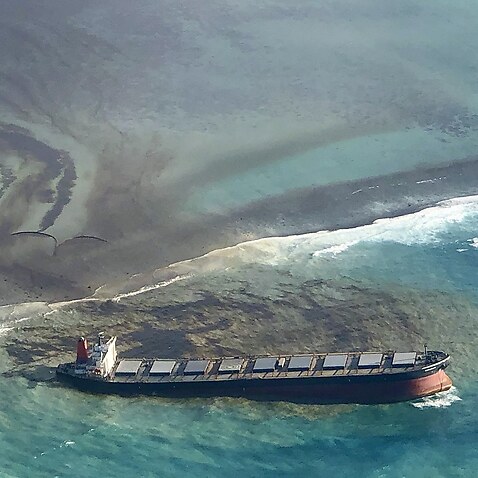 Fuel was being airlifted Monday by helicopter to the shore, but efforts to pump more from the hold were being thwarted by rough seas and strong winds.

The weather, which is also fanning the oil slick further up the coast, is not forecast to improve until evening.

Some fuel has been removed but 2,500 tonnes still remains aboard, said Prime Minister Pravind Jugnauth, who warned cracks in the hull were worsening, and there was a very real chance the boat could split.

"We are in an advanced fracturing process. The bulk carrier does not have much time ahead of it," said one scientist working on the emergency effort, speaking on condition of anonymity. Divers have reported fresh cracks in the hull, while creaking sounds from the vessel could be heard from the southeast shore, where a major clean-up operation is underway to remove treacly sludge coating miles of Mauritius' unspoiled coastline.

Japan on Monday dispatched a six-member team, including members of its coast guard, to assist. A French naval vessel with technical advisers aboard arrived Sunday from nearby Reunion, a French Indian Ocean island.

A spokesman at Mitsui OSK Lines, which operates the Wakashio, owned by another Japanese company, Nagashiki Shipping, told AFP it would send a team of experts as soon as Tuesday if they tested negative for coronavirus.

"Nagashiki Shipping deeply apologise to the people of Mauritius and will do their utmost protect the environment and mitigate the effects of the pollution," the Wakashio's owner said in a statement Monday.

The bulker struck a reef at Pointe d'Esny, an ecological jewel fringed by idyllic beaches, colourful reefs, sanctuaries for rare and endemic wildlife, and protected wetlands. 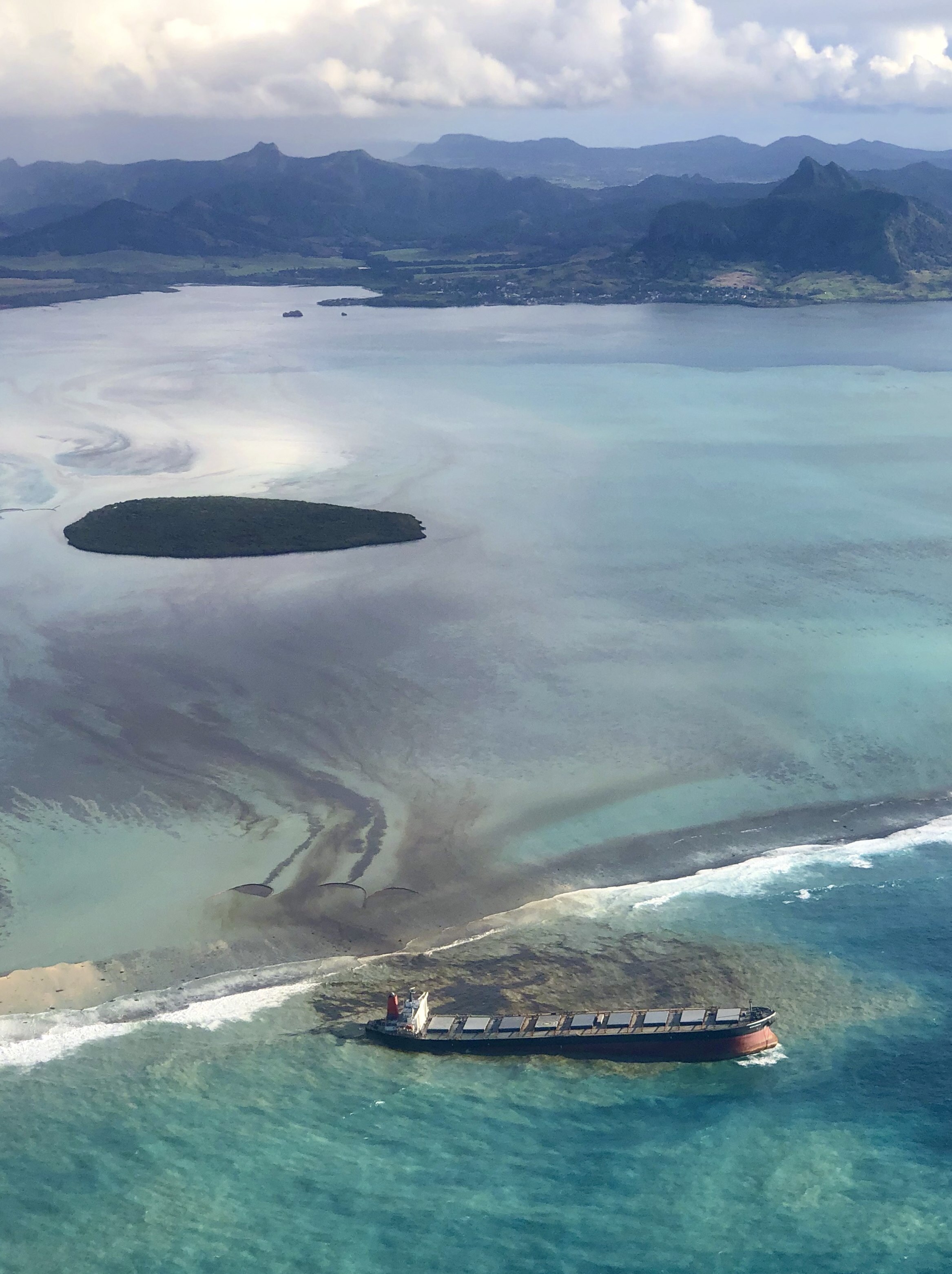 Oil leaking from the MV Wakashio, a bulk carrier ship that recently ran aground off the southeast coast of Mauritius.
Eric Villars

Aerial images show the enormity of the disaster, with huge stretches of crystal-clear seas around the marooned cargo ship stained a deep inky black.

Thousands of volunteers, many smeared head-to-toe in black sludge, have marshalled along the coastline since Friday, stringing together miles of improvised floating barriers made of straw in a desperate attempt to hold back the oily tide. 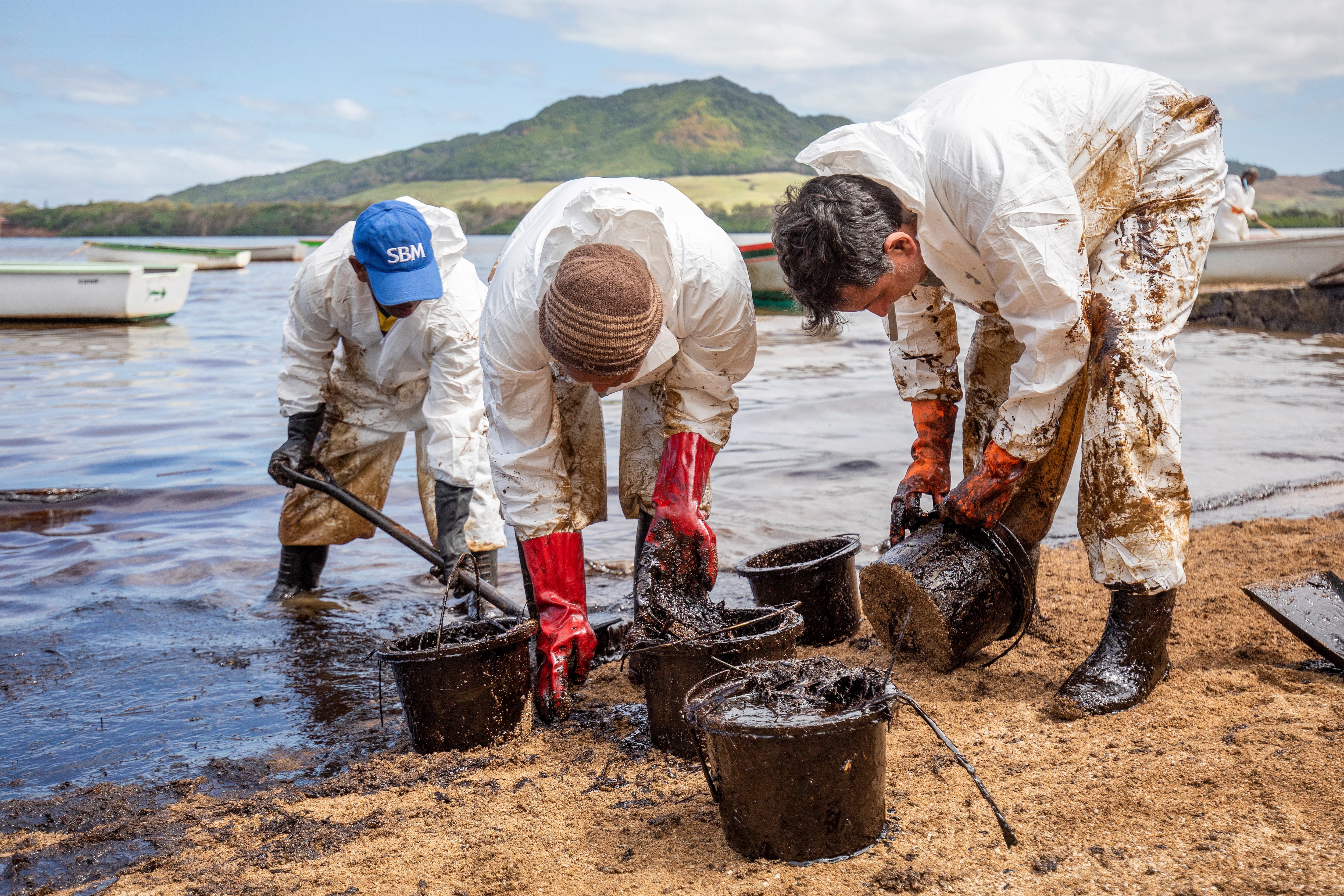 Local volunteers clean up oil washing up on the beach from the MV Wakashio, a Japanese owned Panama-flagged bulk carrier ship that is leaking oil of Mauritius.
EPA

Police are expected to take statements from the captain and crew of the Wakashio after launching an investigation. Detectives boarded the ship on Sunday and seized the log book and black box.

Pressure is mounting on the government to explain why more was not done in the two weeks since the vessel ran aground.

Mauritius and its 1.3 million inhabitants depend crucially on the sea for food and ecotourism, having fostered a reputation as a conservation success story and a world-class destination for nature lovers.