Ivor Houston wanted to make a difference to the lives of refugees, so he packed some essentials and travelled 4,000 km from Perth to Sydney on foot. After six months, he's now home. 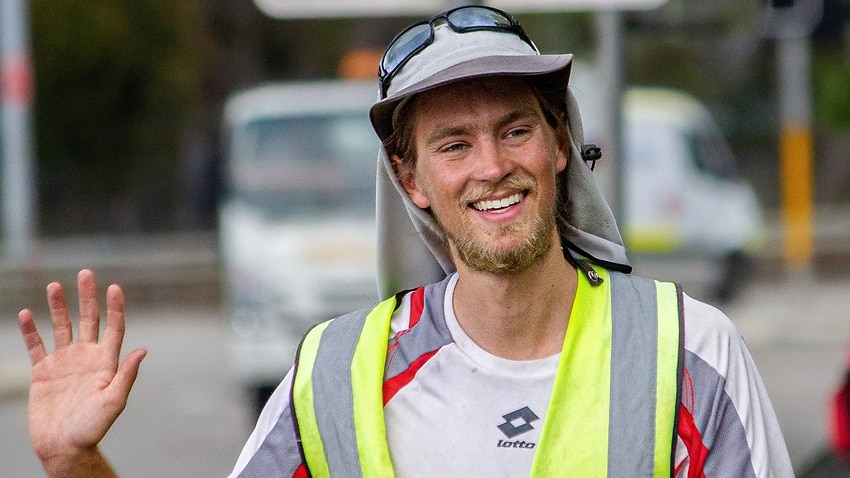 It’s taken Ivor Houston six months and more than five million steps to complete his walking trek across Australia to raise funds for refugee displacement - a cause he says is close to his heart.

When SBS News spoke to Mr Houston over the phone while he was on the home stretch, his words were punctuated by heavy breathing as he trudged along Sydney's Great Western Highway to his final destination: Bondi Beach.

“I would just tell myself, ‘one step at a time’, and now I think anything is possible,” he said.

The 22-year-old reached Bondi on Sunday morning after his inspirational 4,000 kilometre journey from the Indian Ocean all the way to the Pacific Ocean.

Mr Houston follows in the footsteps of Clinton Pryor, who walked from Perth to Parliament House in Canberra in 2017 to demand justice for First Nations people.

Mr Pryor, a Wajuk, Balardung, Kija and a Yulparitja man from Western Australia was heralded as 'the Spirit Walker' and was on a mission to tell Australia's political leaders about the injustices First Nations people faced across the nation.

The purpose of Mr Houston's trekking adventure was to raise funds for a volunteer-run refugee centre in his hometown in the Blue Mountains.

“There’s some kind of parallel to me walking long distances … but in no way am I anything compared to [refugees and asylum seekers] because they have families, the elderly, the young, they don't have good footwear, they don't have any kind of safety equipment, they don't have food security," he said.

“Here I am in a country where I’ve never once felt scared for my life.”

The route Ivor took from the Indian ocean to the south Pacific. Source: Google Maps

There were difficult points in the trip, Mr Houston said, noting the brutal days he trudged across the wide expanse of the Nullarbor Plain with no trees to seek shade.

But despite the struggles he faced along the way, he never once thought to stop.

“The walk is not about me, it’s not about the adventure. I’m just the one moving my feet and being the medium for people to be drawn to the awareness I’m raising,” he said.

Mr Houston said his plan to bolster funds for the Blue Mountains Refugee Support Group (BMRSG) came to him after a refugee family lived with him 18 months ago.

For most of the journey, Ivor lived out of his tent and the essentials he brought with him. Source: Supplied/Ivor Houston

“We’ve lived with them and breathed with them. We’re now family, and they’re supported by Blue Mountains Refugee Support Group,” he said.

“Seeing how much [BMRSG] have supported them emotionally, financially, it’s absolutely ridiculous.”

“The money will wholeheartedly go to the families and refugees that have fled their country due to persecution or conflict and improve their lives," he said.

“To have this kind of support really touches me I'm very just thrilled and honoured that I've been able to kind of make a bit of an impact.”

Getting to a Sydney signpost made Ivor feel like he was making real ground on his journey back home. Source: Supplied/Ivor Houston

“Ivor was able to traverse our country without being shot at, without risk of being taken prisoner, and he eloquently compares that to the plight of those escaping tyranny to try and come to freedom," he said.

The mayor called on the federal government to follow in Mr Houston's footsteps and show “deep compassion and empathy” for refugees and asylum seekers remaining in offshore detention.

“It's about time Australia woke up to itself and change the appalling policies of offshore detention, and started showing the same compassion and empathy that Ivor showed.”

“I’m incredibly proud to be Australian because of the experience I had, and for being so safe. I wish we could show the world that this is how we live,” Mr Houston said.

“Let’s tackle this issue all together with justice and compassion because we're all here for a certain amount of time and it's all just by chance. Let’s work together and make the most of it.”