The behaviour of the woman has been labelled "completely unacceptable". 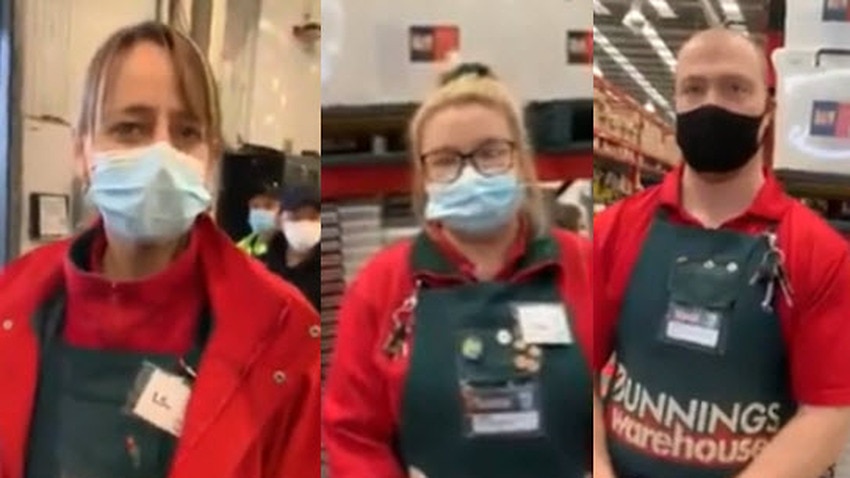 A woman who claimed it was her right not to wear a face mask at a Bunnings Warehouse in Melbourne has been criticised by health and legal experts.

The woman filmed Bunnings employees asking her to wear a face mask in keeping with coronavirus rules but she refused, claiming the store had no legal right to do so.

Residents of metropolitan Melbourne and the Mitchell Shire must wear a face covering when leaving home unless they have a lawful reason not to.

The woman said Bunnings staff had no right to question her or force her to wear a mask.

“It is unlawful and it is discriminatory and it is illegal and I’m going to continue going in here and getting what I need because it is unlawful for you to do that,” she said in the video. “It is my right as a human woman to do whatever I want”.

Wait til this Karen finds out about 'no shoes, no shirt, no service'. pic.twitter.com/2dvLE90dOa

A later video showed her refusing to be arrested by a Victoria Police officer.

The woman, who has been approached for comment, posted her video in a private Facebook group called 'The Conscious Truth Network', which describes itself as a “group for conscious and critical thinkers” and “people who are curious enough to question authority”.

A member of the group, which has 2,500 members, then posted the clip to Twitter on Sunday morning, where it was viewed more than 200,000 times in just a few hours.

"Any sort of abuse is intolerable and completely unacceptable, particularly to those retail staff at places like Bunnings, who are just seeking to be COVID-safe, to obey the law," he told reporters in Canberra.

"That sort of behaviour has to stop."

Dr Coatsworth acknowledged wearing face masks wasn't easy but said you "only had to see the [case] numbers to understand the why".

"Whilst I understand it can be a difficult thing to get used to, the idea that it's some sort of imposition on someone's freedom or individual rights ... I'm not sure I can be convinced of that."

People who do not wear masks and who do not have a lawful excuse can be fined $200, with 20 mask-related fines issued over the previous 24 hours, Victoria Police said on Sunday.

Deb Poole, chief operating officer at Bunnings, also described the woman's behaviour as "completely unacceptable" and said the company was proud of the way staff "calmly and professionally handled the situation".

"The safety of our customers and team is our highest priority. We’re doing everything we can to keep everyone safe, including requiring customers to wear face masks or coverings as a condition of entry," Ms Poole said.

She said the vast majority of customers were "doing the right thing".

Associate Professor Luke Beck from the Faculty of Law at Monash University said the woman in the video clearly broke the law.

“The requirement to wear a mask, that’s the law. There’s a legal obligation on all of us to wear a mask. The law says that unless those exceptions apply, you must wear a mask,” he said.

Exceptions include having a medical condition that impairs your ability to wear a face covering, such as asthma and a need to lip read, or an inability to do your job while wearing a mask.

Children under 12 are not permitted to wear a mask and those under two must not wear one because they are at risk of choking and suffocating.

Associate Professor Beck said it was “perfectly acceptable” for a shop to ask its customers to wear a mask when they enter the premises if they had no medical exemption, and that managers have the right to ask them to leave if they refuse.

“Bunnings is not doing anything wrong at all,” he said.

“In fact, Bunnings potentially has a legal obligation to exclude people like her, not merely because she’s breaking the law herself, but by not wearing a mask she’s potentially putting other people in the shop - employees and other customers - at risk.

“There’s no good excuse for people like her to be doing that. She’s harming other people."

Associate Professor Beck said there had been a rise in people around the world using pseudo-legal terms to make arguments around human rights since the pandemic began, which he described as “nuttiness”.