The jail sentence for Sudanese refugee Akon Guode has been reduced. 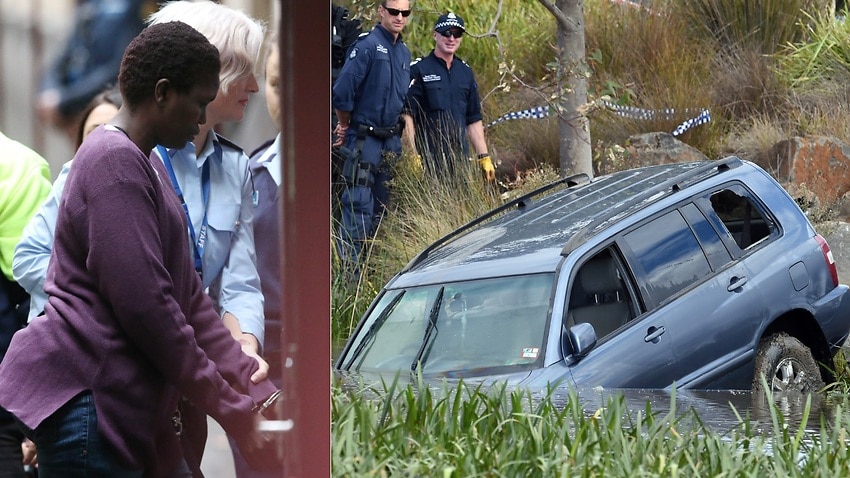 Combo image: Akon Goude being led away by guards, and a 4WD being removed from Lake Gladman in Melbourne. Source: AAP

A woman who killed three of her children and tried to murder another will serve less prison time because of her disturbed mental state, a Victorian court has ruled.

Akon Guode, a Sudanese refugee, pleaded guilty to murdering her four-year-old twins Hangar and Madit, killing her 16-month-old son Bol, and attempting to murder a fourth child by driving them into a Wyndham Vale lake in 2015.

She was sentenced to 26 years and six months in prison, with a non-parole period of 20 years.

But on Thursday, the Court of Appeal found the term was "manifestly excessive" and reduced her sentence to 18 years, with a non-parole period of 14 years.

Akon Guode arrives in a prison van to the Supreme Court of Victoria in Melbourne, Tuesday, May 30, 2017. Source: AAP

"Had adequate weight been given to the applicant's mental condition and other factors in mitigation, we consider that significantly more lenient sentences would have been imposed," the justices wrote in their decision.

Chief Justice Anne Ferguson and judges Phillip Priest and David Beach noted they had not "lost sight of the fact that three vulnerable children lost their lives" and a fourth nearly did.

"Adjectives such as 'tragic' are inadequate to convey the depth of emotional response provoked by the destruction of such innocent lives," they wrote.

But Guode's "situation is pitiable".

In war-torn Sudan, Guode saw her husband killed and was then raped until she was unconscious before fleeing in 2003 with three daughters to Uganda where she was granted refugee status.

2015 file photo of a 4WD being removed from Lake Gladman in Melbourne. Source: AAP

In 2009 in Melbourne, she started a relationship with Joseph Manyang, who lied to her and said he had split with his wife.

The pair went on to have four children and he offered little support.

When Mr Manyang's wife found out about the affair, problems flared between her and Guode, with the latter becoming estranged from the local Sudanese community.

During the birth of Bol, she suffered a significant haemorrhage and needed life-saving surgery.

She also developed depression and had post-traumatic stress disorder.

Guode "fatefully and irredeemably breached" her children's trust when she drove them into the lake, but "her capacity to make calm and rational decisions was severely compromised by a mental condition which was not of her own making", the appeal judges found.

It is likely Guode will have to serve her time in protective custody and will face deportation at the end of her sentence.