The coronavirus outbreak at a Melbourne abattoir keeps growing, with the state government forced to address concerns about a diagnosis more than a month ago.

Victoria's Chief Health Officer has hosed down concerns a staff infection early last month was the source for a coronavirus outbreak at a Melbourne meatworks, as more cases have been linked to the abattoir.

There are now 49 cases linked to the outbreak at the facility. The Cedar Meats facility in Brooklyn, Melbourne is linked with 45 cases of coronavirus.
AAP

A worker at a Footscray nursing home who is the partner of one of the meat workers is among those who have tested positive, the Herald Sun has reported.

Chief Health Officer Professor Brett Sutton is confident the outbreak has not stemmed from a worker who tested positive for the virus on 2 April, weeks before hundreds of other staff were tested and sent home.

The worker told the Department of Health and Human Services they had not been at the facility for weeks beforehand, ruling out the possibility they could have infected others.

"I have been told that that early case wasn't part of the cluster - wasn't on site," Mr Sutton told 3AW on Wednesday.

Mr Sutton is not aware of anyone informing Cedar Meats of the case. 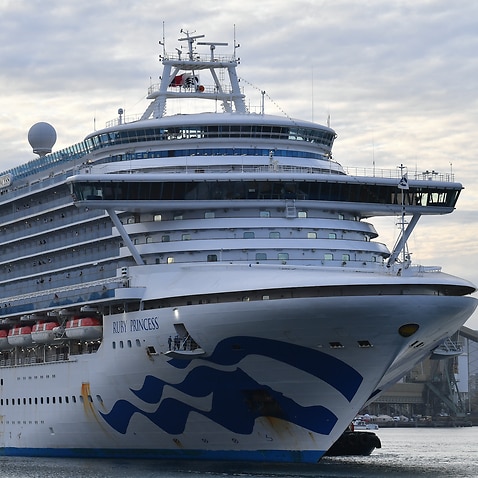 'One hasty decision' could lead to resurgence in NSW coronavirus cases

The second case linked to the workplace was diagnosed on 24 April, followed by a third case about 24 hours later. That person had been a patient at Sunshine Hospital for unrelated reasons prior to diagnosis or displaying symptoms.

A healthcare worker became infected through the worker's Sunshine Hospital visit, while others have been quarantined.

It wasn't until 29 April that the department took additional actions, including testing all 350 Cedar Meats staff.

Mr Sutton said it's not clear exactly how the outbreak emerged.

He said reports the worker was confirmed as infected on 2 April and had actually been on site were "a rumour", but could be checked if needed. The facility has been shut for now and Mr Sutton expects that will bring the outbreak to a head, after some cases emerge in the next two weeks

Agriculture Minister David Littleproud is investigating whether commonwealth officials inspecting abattoirs might have been affected.

"I'm just getting to the bottom of when we were notified because obviously they make an inspection at one abattoir and move to another," he told reporters in Canberra.

"Those commonwealth and department of agriculture personnel who were in that abattoir and then moved to another one potentially could have spread the virus. So I want to get an understanding of what Victorian state officials undertook in that."

Opposition Leader Michael O'Brien said the outbreak was "[Premier] Daniel Andrews' own Ruby Princess", referring to the cruise ship that docked in Sydney and is now the subject of a special commission.

"We've now got one of the biggest coronavirus clusters in Victoria because the government has dropped the ball," Mr O'Brien told reporters.

Of Victoria's 17 latest cases, seven are returned overseas travellers who are in mandatory hotel quarantine and six cases remain under investigation.

Eight people remain in hospital, including six in intensive care.