'Menstruation is not a luxury': Anger over re-introduction of tampon tax in Tanzania

The decision by the Tanzanian government to re-introduce a tax on tampons has been criticised by reproductive health advocates who have launched a social media campaign. 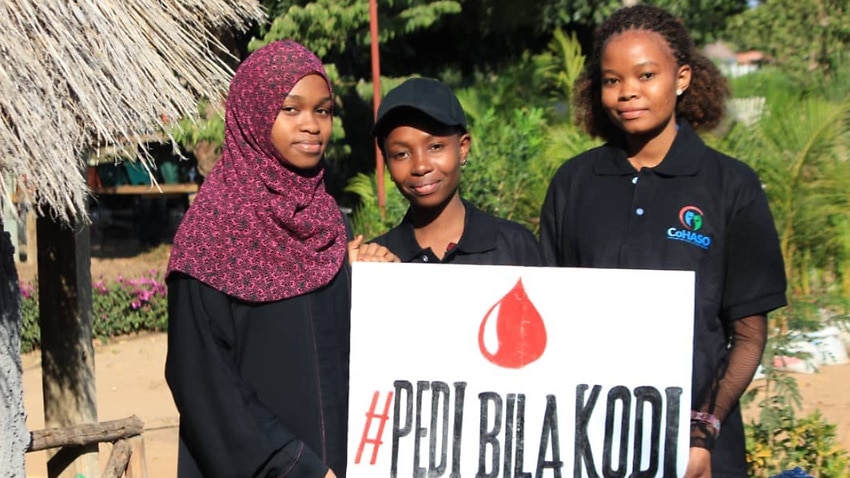 A campaign has been launched on social media under the hashtag #PediBilaKodi (pads without tax, in Swahili). Source: Twitter/WaterAidTZ

A decision by Tanzania's government to reintroduce a tax on sanitary pads and tampons has angered women in the country, with one activist on Sunday saying it would have "heavy consequences" for women.

Taxes on female sanitary products -- which are basic necessities -- have come under increasing scrutiny across the globe, and Tanzania in 2018 decided to join those nations scrapping Value Added Tax on pads and tampons.

However the tax was re-introduced during the unveiling of this year's budget last week.

Finance Minister Philip Mpango said removing the tax was counter-productive, as retailers had not lowered their prices.

"Whatever the reason given by the government, the re-introduction of this tax is an unfortunate decision with heavy consequences for most women and girls," Anna Henga of the Legal and Human Rights Centre (LHRC) told AFP.

"The government should rather try and understand why the exemption did not lead to the expected results, and then correct the errors in the application of the exemption."

Henga called for a "subsidy" of the products, or for them to be freely distributed in public health centres.

Lack of access to pads or tampons and stigma over menstruation is often cited as a key reason girls miss out on school, or stop going entirely, in African nations.

"Through knowledge we gain power over our lives. With options we have possibility. With acceptance we find a new freedom" #PediBilaKodi pic.twitter.com/3FST4W2USq

Opposition lawmaker Zitto Kabwe, who is also an economist, told parliament on Friday that the government had acted too fast.

"Is 12 months really enough to do an evaluation?" he said, urging government to better control the sale of female sanitary products.

"When we scrapped this tax the whole world applauded. And many countries followed suit. And now we want to take a step backwards," he said.

Even members of the ruling CCM called for the tax exemption to remain.

"The government freely distributes condoms used by some to commit adultery. Why can't it give these pads freely to students," said lawmaker Goodluck Mlinga.

"The high rate of school failures by girls in rural areas is largely due to their absence during their periods," he said.

On social media a campaign has been launched under the hashtag #PediBilaKodi (pads without tax, in Swahili).

"Menstruation is not a luxury or a choice. Tell the government and parliament we want pads without tax," wrote Tanzanian activist Maria Sarungi Tsehai on Twitter.

I support this campaign because menstruation is not a luxury,
why tax it? #PediBilaKodi pic.twitter.com/RgzfP0Jqe7

Last year, the Govt removed VAT exemption on sanitary products. This year, it might be added back on. Let’s not move backwards. We want to see #PediBilaKodi – menstruation is not a choice, these are essential products for all women and girls! @MHDay28May @AfriCoMHM

In another move which sparked anger amongst Tanzanian women, a tax of 25 percent was placed on imported wigs and hair extensions, while a tax of 10 percent was imposed on those made locally.