The situation for children in detention on Nauru has reached “crisis point,” a lawyer for the Sydney-based National Justice Project says. 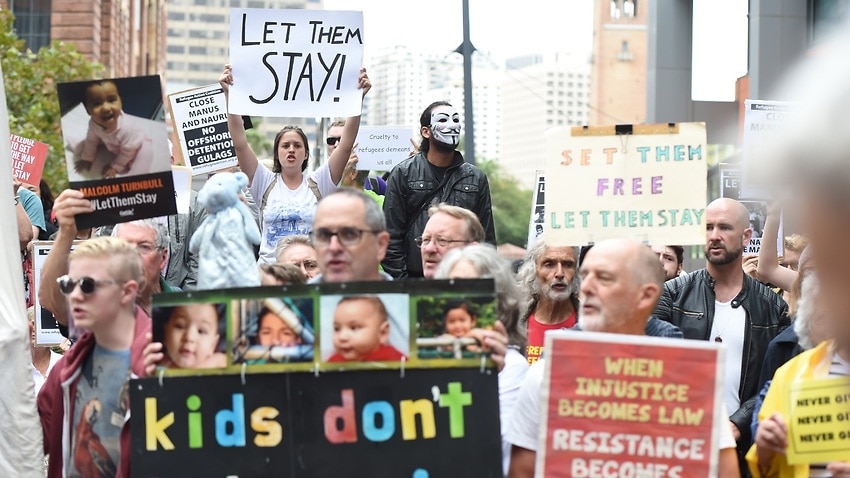 Hundreds of protesters hold a rally outside the Department of Immigration offices in Sydney, Thursday, Feb. 4, 2016. Source: AAP

The Australian government will allow a young girl to leave an offshore detention centre on the Pacific island nation of Nauru and seek medical care in Australia, the latest in a series of refugee children who have asked to be let into the country for treatment.

The decision came just before a federal court hearing on Wednesday at which lawyers for the girl’s family planned to argue that she be brought to Australia immediately.

She has serious mental health issues and is likely to leave for Australia on Friday, according to The Guardian Australia.

The girl, whose name and age have not been disclosed, is at least the seventh seriously ill child to be brought to Australia under legal pressure since the Nauru centre reopened in 2012, according to the National Justice Project, a nonprofit legal service that has represented most of them, including the girl on Wednesday.

The seven children include one girl in February and a 10-year-old boy in March who were considered to be at risk of killing themselves.

Under current Australian immigration policy, asylum-seekers and refugees who reach Australia by boat are forbidden to enter, in a bid by the government to discourage dangerous ocean crossings and human trafficking.

Instead, they have been sent for processing on Nauru and Manus Island, which is part of Papua New Guinea.

The Manus Island centre was closed last October amid protests from its inhabitants, who said they feared being attacked by local residents.

The situation in the Nauru detention centre has reached a “crisis point,” George Newhouse, the principal lawyer for the National Justice Project, said in a phone interview.

“These children live in hopelessness and despair, and we’ve observed that it’s getting worse,” he said. “We are alarmed at the number of children who are imminently at risk of harm or death.”

Some children have been on the island for nearly five years, he added.

“It’s just a matter of time before someone dies or is seriously injured,” he said. “If that happens, Australia is responsible.”

In 2016, Australian immigration officials told lawmakers that 25 of 54 children who had recently been returned to Australia from Nauru had a clinically diagnosed mental health condition.

The treatment of immigrant children in US detention centres has drawn global attention in recent weeks after President Donald Trump’s “zero tolerance” policy resulted in more than 2,300 children being separated from their parents and other guardians at border crossings.

But critics of Australia’s immigration policy say the issue of what to do with refugee and asylum-seeker children has been mishandled by officials here for years.

According to the Australian Border Force, 255 people were in the Nauru detention centre at the end of April, 22 of them children.

Since the beginning of 2016, three men in their 20s detained on Nauru have died from causes related to self-harm, including an Iranian asylum-seeker last month.

The Department of Home Affairs, which is responsible for immigration, did not respond to a request for comment.

After a visit to Nauru this spring, Indrika Ratwatte, the United Nations refugee agency’s director for Asia and the Pacific, said he had found the state of the children there especially shocking, citing the case of a 12-year-old girl.