It comes after Chancellor Angela Merkel clinched a fourth term in Germany's election on Sunday, but her victory was clouded by the hard-right AfD party winning its first seats in parliament.

"Bravo to our AfD allies for this historic score," tweeted Le Pen, defeated by Emmanuel Macron in the French presidential election run-off four months ago.

Le Pen hailed the AfD after its breakthrough score of 13 percent, enough for close on 90 seats, saying the party was a "new symbol of (the) reawakening of European peoples."

Wilders, head of the Dutch Party for Freedom (PVV), also tweeted his congratulations.

"The PVV is number two in the Netherlands, the FN is number two in France, the (far right) FPOe is second in Austria, AfD is third in Germany. The message is clear. We are not Islamic nations," wrote Wilders, whose party captured 20 seats in a March election. German Chancellor Angela Merkel leaves the stage at the headquarters of the Christian Democratic Union CDU in Berlin, Germany.
AAP

French President Emmanuel Macron said on Sunday he called German Chancellor Angela Merkel to congratulate her on winning a fourth term in office and said France and Germany would forge ahead with their cooperation.

"I called Angela Merkel to congratulate her. We continue with determination our vital cooperation for Europe and for our countries," Macron tweeted.

Chancellor Angela Merkel clinched a fourth term in Germany's election Sunday, but her victory was clouded by the entry into parliament of the hard-right AfD in the best showing for a nationalist force since World War II.

Ms Merkel, who after 12 years in power held a double-digit lead for most of the campaign, scored about 33 per cent of the vote with her conservative Christian Union (CDU/CSU) bloc, according to preliminary results.

Its nearest rivals, the Social Democrats, and their candidate, Martin Schulz, came in a distant second with a post-war record low of 21 per cent. 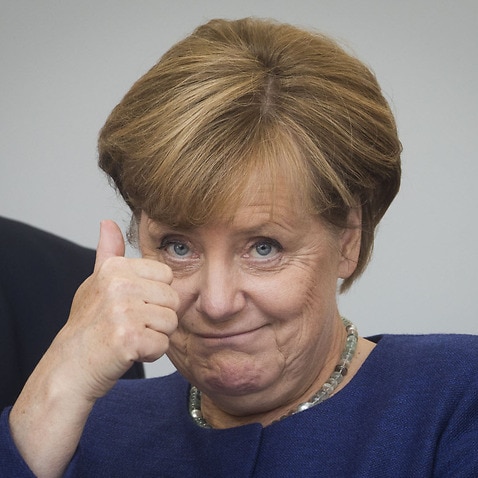 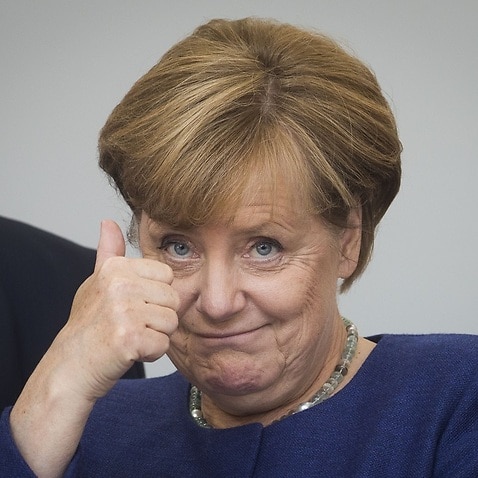 But in a bombshell for the German establishment - the anti-Islam, anti-immigration Alternative for Germany (AfD) - captured about 13 per cent, catapulting it to become the country's third biggest political force.

Commentators called the AfD's strong performance a "watershed moment" in the history of the German republic.

The top-selling Bild daily spoke of a "political earthquake".

AfD supporters gathered at a Berlin club, cheering as public television reported the outcome, many joining in a chorus of the German national anthem.

Hundreds of protesters rallied outside shouting "Nazis out!" while smaller AfD demonstrations were held in other cities across the country.

The four-year-old nationalist party with links to the far-right French National Front and Britain's UKIP has been shunned by Germany's mainstream but was able to build on particularly strong support in the ex-communist east.

It is now headed for the opposition benches of the Bundestag lower house, dramatically boosting its visibility and state financing.

Alarmed by the prospect of what Foreign Minister Sigmar Gabriel branded "real Nazis" entering parliament, the candidates had used their final days of campaigning to implore voters to reject the populists.

Turnout was markedly higher than four years ago, up to around 76 percent from 71.5 percent.

Angela #Merkel has reappeared at the #CDU election party in #berlin to thank campaigners and supporters @SBSNews #BTW17 pic.twitter.com/J6IuTcgfB5

“If we have suffered some losses, I believe it was justified. This is the distinction between a populist party and a responsible party" 2/2

Ms Merkel admitted she had fallen far short of the 40 per cent goal her party set.

"There's a big new challenge for us, and that is the entry of the AfD in the Bundestag," Ms Merkel said, adding: "We want to win back AfD voters."

Germans elected a splintered parliament, reflecting a nation torn between a relatively high degree of satisfaction with Ms Merkel and a desire for change after more than a decade of her leadership.

Another three parties cleared the five per cent hurdle to be represented in parliament - the liberal Free Democrats at about 10 per cent and the anti-capitalist Left and ecologist Greens, both at about nine per cent.

As Ms Merkel failed to secure a ruling majority on her own and with the dejected SPD ruling out another right-left "grand coalition" with her, the process of forming a viable government was shaping up to be a thorny, months-long process.

Ms Merkel, 63, often called the most powerful woman on the global stage, ran on her record as a steady pair of hands in a turbulent world, warning voters not to indulge in "experiments".

Pundits said Ms Merkel's reassuring message of stability and prosperity resonated in greying Germany, where more than half of the 61 million voters are aged 52 or older.

Her popularity had largely recovered from the influx since 2015 of more than one million mostly Muslim migrants and refugees, half of them from war-torn Syria, Iraq and Afghanistan.

But the AfD was able to capitalise on anger over the asylum issue during what was criticised as a largely lacklustre campaign bereft of real clashes among the main contenders.

The party has made breaking taboos its trademark.

Top AfD candidate Alexander Gauland has called for Germans to shed their guilt over two world wars and the Holocaust and to take pride in their veterans.

He has also suggested that Germany's integration commissioner Aydan Ozoguz, who has Turkish roots, should be "disposed of in Anatolia".

Law student Sabine Maier dismissed the AfD as "too extreme" as she voted in Berlin, but added that "they aren't all fascists".

The SPD said its catastrophic result would lead it to seek a stint in opposition to rekindle its fighting spirit.

"This is a difficult and bitter day for German social democracy," a grim-faced Mr Schulz, a former European Parliament chief, told reporters - adding he hoped to remain party leader.

This would leave Ms Merkel in need of new coalition partners.

If the SPD sticks to its refusal to play ball, mathematically the most likely scenario would be a link-up with the pro-business Free Democrats, who staged a comeback after crashing out of parliament four years ago, and the left-leaning Greens.

That so-called "Jamaica" coalition, based on the party colours and the Caribbean nation's flag, would be a risky proposition, given the differences between the parties on issues ranging from climate policy to migration issues.

Mr Schulz, 61, struggled to gain traction with his calls for a more socially just Germany at a time when the economy is humming and employment is at a record low.

Meanwhile Ms Merkel faced accusations from within her conservative camp she had left its "right flank exposed" to the AfD's challenge with her centrist stance on issues such as border policy.

"This is competition for the Union and the conservative spectrum in general," political scientist Lothar Probst of the University of Bremen said of the AfD.

"A very difficult period is beginning for the chancellor."