Population growth has profound impacts on Australian life, and sorting myths from facts can be difficult. This article is part of our series, "Is Australia Full?", which aims to help inform a wide-ranging and often emotive debate.

Rather than being an unsettling force, international migrants are helping to provide stability to the regional Australian communities they settle in. A considerable number of new arrivals are also younger and have the potential to build families and work in these communities.

We can see that, for many small towns, the overseas-born are the only source of population growth. A majority of these places rely on primary industry for economic viability. Although predominantly rural, these places are not in the most remote parts of Australia.

Growth of Australian-born and overseas-born population, 2011-16

Population change between 2011-16 by count of local government area 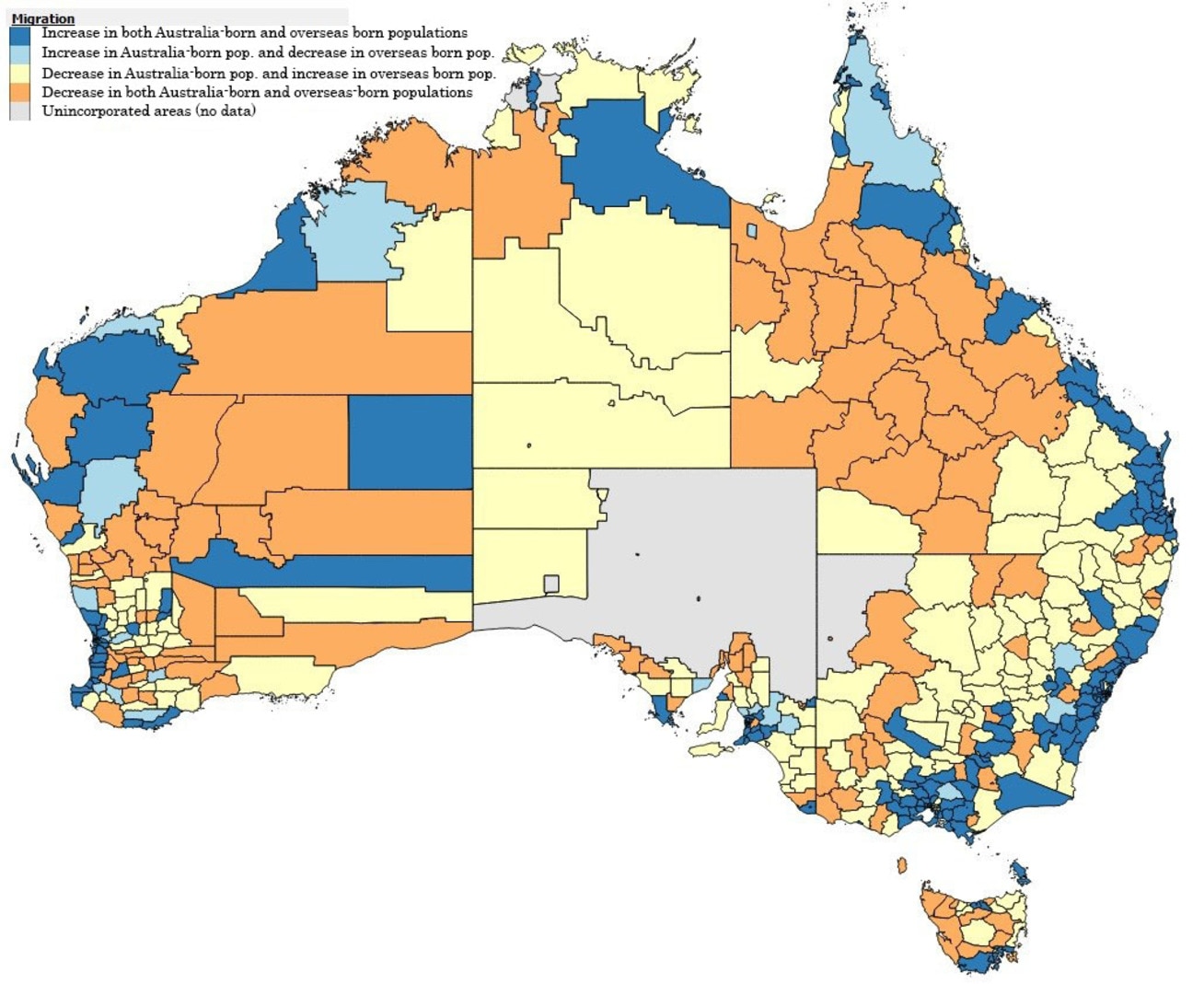 Darwin is one example of where international migration has helped counter population decline. At the 2011 Census, Darwin had 45,442 people recorded as born in Australia and 19,455 born elsewhere. By 2016, the number of Australian-born locals had reduced to 44,953 and the number of overseas-born had increased to 24,961.
Without this increase in overseas-born residents, the Darwin population would have decreased. The local economy would likely have suffered as a result.

The problem of shrinking regional towns

Ever since the influx of immigrants following the second world war, the settlement of international migrants has been overwhelmingly focused on large metropolitan centres. This has been especially evident for recently arrived immigrants and those from culturally and linguistically diverse backgrounds.

Migrants perceive metropolitan areas as presenting a higher likelihood of finding compatriots and better access to employment, as well as education and health services. Large cities have therefore been considered the most appealing settlement locations, with Sydney and Melbourne the most popular.

If settlement of international migrants had been proportional to the overall population distribution in Australia, an additional 125,000 migrants would have settled in regional Australia between 2006 and 2011.

In a concerted effort to promote the social and economic viability of regional communities, in 2004 the federal government started a campaign to increase migrant settlement throughout different areas of the country.

Regional settlement of migrants has since been encouraged across levels of government as a “win-win scenario” for new arrivals and host communities alike.

In the past decade, there has been a particular focus on secondary migration to regional areas. That is, relocating international arrivals from metropolitan areas to regional ones.

Proactive community-business partnerships and local government initiatives have propelled this process. For example, in the Victorian town of Nhill, the local arm of the poultry production company Luv-a-Duck worked with settlement service provider AMES Australia to help more than 160 Karen refugees find work in the area between 2010 and 2015.

In another town, Dalwallinu in Western Australia, the population was in decline and local infrastructure was deemed underused. In response, the local council has worked closely with residents since 2010 to attract skilled migrants.

Notwithstanding the challenges involved in attraction and retention, international migrants remain a vital asset for building regional economies and communities. They help stem skilled labour shortages in these areas – for example, by filling much-needed doctor and nursing positions.

International migrants are also key contributors to the unskilled workforce, often filling positions that domestic workers are unwilling to take on. For example, abattoirs and poultry plants are important businesses in regional Australia. Many would be unable to operate without international migrants, as many local residents do not consider this kind of work “acceptable employment”.

Still, regional areas have remained underrepresented as a settlement location. Despite regional Australia being home to about one-third of the population, less than one-fifth of all new arrivals between 2006 and 2011 settled in a regional area.

For regional areas to make the most of the many advantages migrants have to offer, there needs to be more focused policy that encourages and assists regional settlement across the country. This policy needs to be informed by the work in a growing number of regional communities (like Nhill and Dalwallinu) that already draw on international migration to combat population loss and persistent labour shortages. By encouraging more international migrants to call regional Australia “home”, we can start focusing on ensuring regional prosperity for the long term.

Emily Longstaff works as a Senior Research Assistant for the Regional Australia Institute.