Cases of COVID-19 in Europe have been soaring beyond levels seen in the first wave earlier this year.

Millions of Europeans faced tough new coronavirus restrictions Saturday as governments stepped up efforts to slow the surge in infections, after the World Health Organization reported a "very concerning" 44 per cent rise in European cases over one week.

From Saturday evening, Paris and several other French cities go under a night-time curfew that will last at least a month. England is banning mixed household gatherings in the capital and other areas, and Italy's most populous region is limiting bar openings and suspending sports events.

Cases of the disease, which has killed more than 1.1 million people around the world, have been soaring beyond levels seen in the first wave earlier this year, when many countries resorted to national lockdowns to get control of the crisis.

As well as the death toll, the pandemic has wrought social and economic havoc across the world. 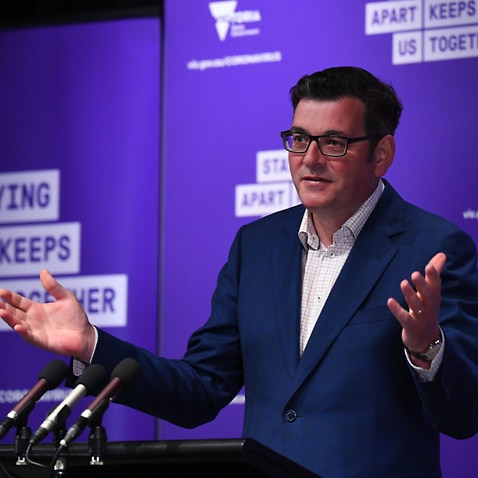 'One-der-ful': Victoria records just a single new case of coronavirus and no deaths

The United States, which has suffered the worst toll with more than 218,000 fatalities, on Friday revealed a record deficit of $3.1 trillion in the fiscal year ended 30 September.

It also announced that the number of cases there had passed eight million, global daily infections also hit a new record.

In a bid to stem the worrying rise in infections and in the hopes of heading off a return to full lockdowns, many governments have tightened measures to control the spread of the pandemic- even if some dissenters are fighting back in the courts.

About 20 million people in the Paris region and eight other French cities were facing a 9pm-6am curfew from Saturday after cases surged in what has once again become one of Europe's major hotpots.

Many restaurant owners are unhappy at the hit their businesses will take.

"Closing at 9:00 pm will have no effect (on the pandemic)," said Gerard, the manager of a Toulouse restaurant. "They're not attacking it in the right way."

But the government and many medical professionals argue that action is needed now to head off a disaster in the hospitals, as intensive care units fill up. The Paris skyline is seen on 16 October 2020, just hours before a city-wide night time curfew goes into effect

But as the government ramped up restrictions, banning indoor meetings between members of different households in London and several other English cities, there was growing criticism from some quarters.

Under the new measures, about 28 million people - half of England's population - are now subject to tight social restrictions.

Some officials in northwest England have objected to their cities being placed on the highest level of a new three-tier alert system.

But the hope is that these measures will be enough to head off another full lockdown.

Northern Ireland meanwhile shut down pubs and restaurants on Friday for a month and extended the school holidays.

"What will determine winter and our Christmas will be decided in the weeks ahead" by how people react now, she said in her weekly podcast address.

But on Friday, a Berlin court overturned an order for restaurants and bars to close early, the latest legal setback for efforts by Germany's national and local governments to restrict coronavirus transmission.

In Italy, the wealthy northern region of Lombardy worst hit by the first wave of the virus in February, has ordered all bars to shut at midnight.

Slovakia announced Saturday it would test everyone over 10 for the virus, as infections surged there.

"Testing will be free of charge," Prime Minister Igor Matoviche told reporters in the country of 5.4 million people, without specifying whether it will be mandatory or voluntary.

Poland, the Czech Republic and Belgium have all announced daily record caseloads.

In the Czech Republic, with record numbers of cases recorded, the government has asked the army to set up a field hospital of 500 beds outside Prague.

Belgium will impose its own curfew, from midnight until 5:00 am, from Monday, and will also shut cafes and restaurants for four weeks.

And Poland has closed schools and colleges in major cities while restaurants will have to close from 9:00 pm.

Austria, Slovenia and Hungary have all announced a surge in cases - in Slovenia, the compulsory wearing of masks in outdoor public spaces came into effect Saturday.

Austria's Foreign Minister Alexander Schallenberg and Belgian Foreign Minister Sophie Wilmes became the latest politicians to test positive for COVID-19. And the Vatican announced that a case had been recorded at Santa Marta residence, where Pope Francis lives

'Not a sprint, it's a marathon': Disability royal commission to request extension to September 2023

Warren Mundine appointed to SBS Board in non-executive director role