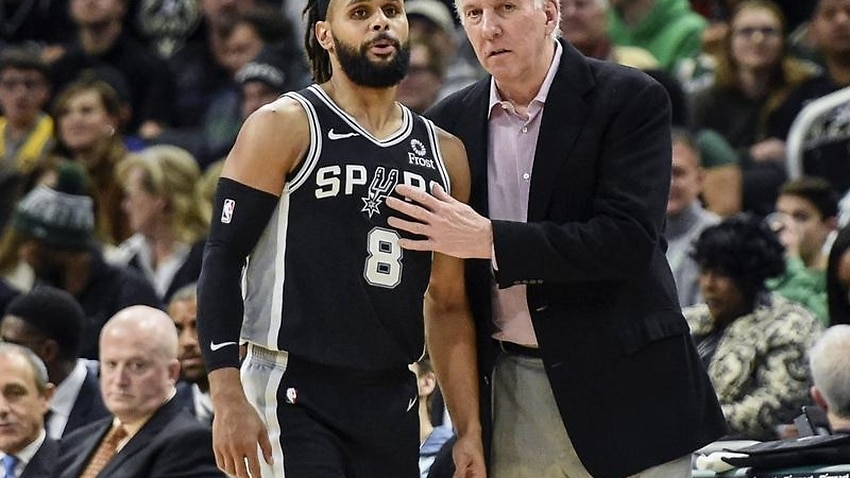 Patty Mills has big plans for his Spurs coach Gregg Popovich when he heads to Australia. (AAP)

There has been plenty of banter between Patty Mills and his San Antonio coach Gregg Popovich ahead of the United States basketball team's visit to Australia in August.

But barely any of it has been about basketball, despite Boomers guard Mills admitting their two exhibition games against Team USA - to be coached by Popovich - had the potential to reshape the sport in Australia.

About 100,000 fans will watch an Australian side full of NBA talent play the United States in back-to-back games at Marvel Stadium before both teams head to China's World Cup.

Mills can't wait to lock horns with Popovich, who coached him to an NBA championship in 2014.

"What these games can possibly do for basketball in Australia, from youngsters to the NBL, you get goosebumps on your hands knowing you're involved," he said.

But he is just as excited to offer his long-time coach, a noted and respected humanitarian and political voice in the United States, a taste of the real Australia.

"I have chatted with him quite a bit about this, asked him what restaurants he would like me to take him to, what wines he'd like to drink and also him visiting an Aboriginal community to show him my culture," Mills said.

"He's heard about it so many times but for me to show him first hand, Australia's culture and history, would be pretty cool.

"That would be a cool trip to take him to a remote community or something like that and maybe bring a couple of players along as well.

Mills has long been a proud voice for Aboriginal and Torres Strait Island people, most recently wearing custom-made shoes emblazoned with the words 'Survival' and 'Invasion' on the eve of Australia Day.

"It meant a lot to me and to be able to do it in a cool and fun way that wasn't to get involved in the debate of actually changing the date (of Australia Day), just to give information as best I could for anyone who wants to learn," he said.

About 90 per cent of tickets to both games, on August 22 and 24, have been sold but the final few remain available from Ticketmaster.