Employers who offer new parents paid leave worth more than $11,500 are "terrifically public spirited" but Tony Abbott does not see why their workers should get any more from taxpayers.

However, the federal government now concedes that parents who access both their employer and government paid parental leave schemes are not the problem.

It is all about the rules. After a week of painting parents as "double dippers" and describing the practice as a rort, the government has retreated from its rhetoric.

"The system itself is the problem, not the individuals," Social Services Minister Scott Morrison said on Monday.

Treasurer Joe Hockey still insists it is double dipping when parents use both employer and taxpayer-funded schemes.

But he has retreated from his earlier claim that it amounted to fraud, telling the Nine Network on Monday: "If you comply with the law it is not fraud."

Labor has accused the ministers of using semantics to justify demonising and insulting new parents.

"They should stop this divisive language and drop their cuts immediately," opposition families spokeswoman Jenny Macklin said in a statement.

The prime minister said under changes the government wants to make from July 2016, everyone would be guaranteed 18 weeks' leave at the minimum wage.

"If your employer gives you more, well that's terrific, you've got a very public spirited employer who understands the importance of trying to attract a diverse workforce and keep them," Mr Abbott told reporters in Mackay.

"But obviously there's no longer need for a safety net."

Mr Morrison conceded the government had found the argument "a difficult issue to manage" during the budget week.

"It's not being added on to the end of when you've received your employer-funded scheme; it's being taken as a bonus payment along the way," Mr Morrison said.

That meant there had been little change in the number of parents staying at home with children for longer than 18 weeks. 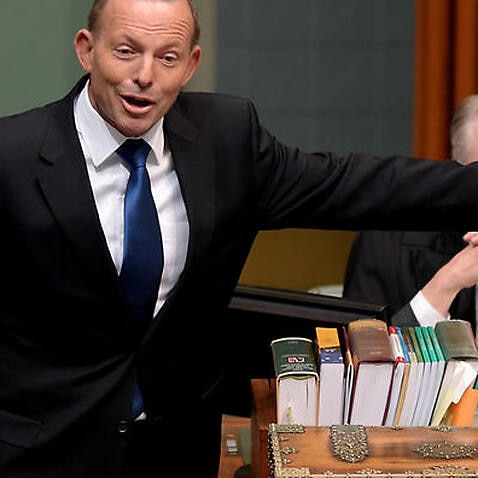