New Zealand will confront its twin histories as it marks the 250th anniversary of James Cook's arrival. 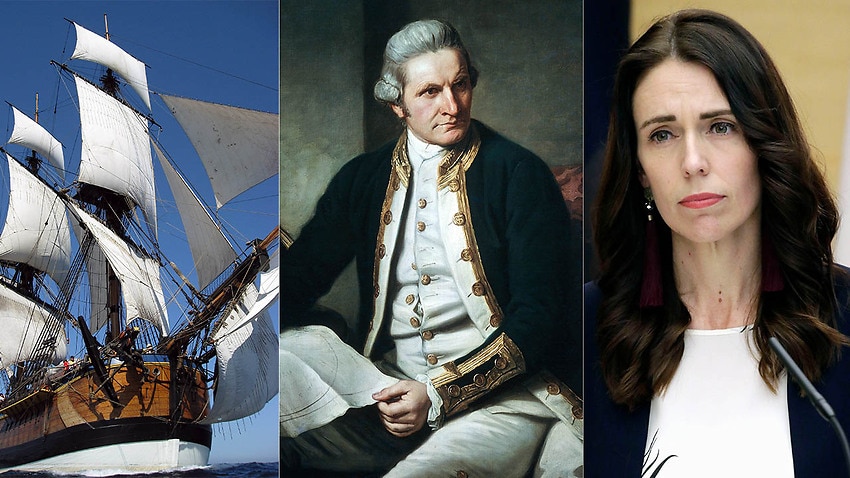 New Zealand is set for a divisive weekend as commemorations begin to mark 250 years since the arrival of English explorer and naval officer Captain James Cook.

On Saturday, a flotilla of ships including a replica of Captain Cook's flagship Endeavour, will dock in the North Island town of Gisborne, where the British officer first landed in 1769.

Named "Tuia 250" - tuia being a Maori word for weave or bind - the flotilla will include half Pacific ships and half European.

The Haunui will be part of the Tuia 250 voyage. Source: NZ Ministry for Culture and Heritage

But some Maori groups have called for a Tuia 250 boycott both on Saturday and as it travels around the country in the months ahead.

Paora Tapsell, a professor of Australian Indigenous studies at the University of Melbourne, told SBS News the reaction was understandable.

"[They are asking] why should we be celebrating Cook and (botanist Sir Joseph) Banks on the Endeavour as the beginning of nationhood in New Zealand?"

In 1768, Cook embarked on his first Pacific voyage, with instructions to chart the transit of Venus across the sun at the equator. Source: Royal Museums Greenwich

Professor Tapsell, who has Maori heritage, said the leadup to Tuia 250 had "very similar discussions, very similar rhetoric" to the Australia Day debate in Australia.

"It's not unlike Australia, where we have a very big divide between blackfellas and settlers. There are misunderstandings, people talking past each other," he said.

There are misunderstandings, people talking past each other

"There are tensions among people not being recognised as having equity in the voice of sovereignty."

But he said Tuia 250 had the potential to encourage Kiwis to "investigate and interrogate what it means to be a New Zealander".

Tina Ngata is one Indigenous advocate calling for boycotts.

The HMB Endeavour will be part of the flotilla. Source: NZ Ministry for Culture and Heritage

She told the Waatea News earlier this week that any celebration of Captain Cook ignores multiple killings around the country.

"He barely went a week in his time here without shooting at people," she said.

"We really need to pull the veil back on a lot of those experiences, and as much as Tuia 250 has tried to maintain that it is about honest conversations, more often than not it has suppressed and sanitised and watered down the truth of what happened."

One Maori group in the country's Far North District will go as far as blocking the replica Endeavour from docking there later this year.

'Committed to working together'

But former New Zealand prime minister Jenny Shipley told TVNZ on Friday that "Tuia means 'united and bound together'. Not the same, but committed to working together".

"It's [about] how do we work together? How do we bind ourselves in a shared future? Which is what Tuia means," she said.

And deputy leader of New Zealand's Labour Party Kelvin Davis said in a statement this week he hoped the occasion will attract more reflection than revelry.

"Tuia 250 means having honest conversations about our history and I encourage all our communities to get involved, to grow their respect for their own history and the history of others," he said.

Jacinda Ardern will be in Gisborne on Saturday. Source: AAP

Prime Minister Jacinda Ardern will be in Gisborne as the flotilla arrives.

She will meet with French Polynesian President Edouard Fritch, a gesture aimed at noting the role of French Polynesian man Tupaia back in 1769, when he mediated between Europeans and Maoris upon Captain Cook's landing.

On Wednesday, the United Kingdom High Commissioner Laura Clarke met with Maori leaders and issued a statement of regret for Maori deaths at the hands of British explorers after Captain Cook's arrival.

"The expression of regret responds to a request from the local iwi for this history to be heard and acknowledged," a British High Commission statement said.

"The British High Commissioner will acknowledge the pain of those first encounters, acknowledge that the pain does not diminish over time, and extend her sympathy to the descendants of those killed."

Meanwhile in Australia, government material says "to mark the 250th anniversary of the voyage (Cook 250), funding is being provided for a range of activities".

The Endeavour replica is due to set sail from Sydney in March 2020, and head south to Hobart before turning north to commence a full circumnavigation of mainland Australia.

"That voyage is the reason Australia is what it is today and it's important we take the opportunity to reflect on it."

Scott Morrison said Cook's voyage 'is the reason Australia is what it is today'. Source: AAP

In 1768, Captain Cook embarked on his first Pacific voyage, with instructions to chart the transit of Venus across the sun at the equator.

He started to chart New Zealand in 1769, before continuing on to sight the east coast of Australia at Point Hicks on 20 April 1770.

As the Endeavour sailed north he charted the coast making the first landfall at Botany Bay on 29 April 1770.

Share
Published 5 October 2019 at 7:59am
By Nick Baker
Topics
AustraliaAsia-Pacific