More strong earthquakes have struck off Western Australia's north coast after Sunday's magnitude 6.6, which was felt from Darwin to Perth. 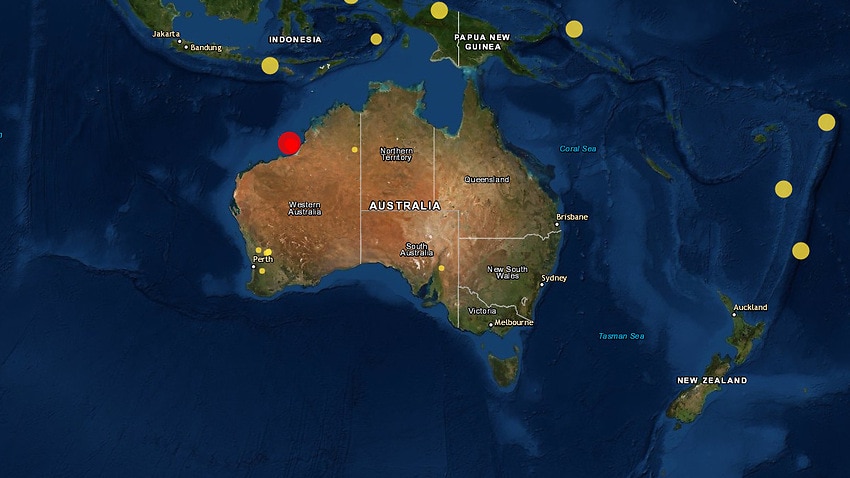 The location of the earthquake. Source: Geoscience Australia

More strong earthquakes have struck off Western Australia's north coast and experts say the aftershocks could continue for a long time.

Multiple undersea quakes were recorded off the coast between Port Hedland and Broome on Monday morning.

The strongest were magnitude 5.1 and 5.5

A magnitude 6.6 quake struck in the same area on Sunday afternoon and was felt from Perth to Darwin.

It was the equal-biggest earthquake ever recorded in Australia, matching a quake in Tennant Creek in the Northern Territory in 1988.

Geoscience Australia seismologist Spiro Spiliopoulos said more than 30 quakes had been recorded in the area in less than 24 hours and more were expected.

The impact of the earthquake is felt by shoppers in Western Australia. Source: Twitter/@StorerDylan

There is no threat of a tsunami to the Australian mainland, islands or territories, the weather bureau states.

"The Tennant Creek aftershocks went for a very long time - we got small earthquakes there years after the main shock," he told AAP.

"It's not unusual. They can go on for days, weeks."

The quakes could be related to mapped fault lines in the area, Mr Spiliopoulos said.

There was only a small chance a larger quake would follow, he said.

About 15 earthquakes of magnitude 6.0 and above have been recorded in Australia since the agency began recording data about 1901, predominantly on the west coast.

"We seem to get them roughly every eight years on average," Mr Spiliopoulos said.

"In 1929, there was a magnitude 6.0 and above close to where this one was, the same sort of area off the North West Shelf."

He also noted the 1968 earthquake that devastated Meckering, 130km east of Perth, which was a magnitude 6.5.

Curtin University's School of Earth and Planetary Sciences Professor Chris Elders said only six earthquakes of this magnitude or larger had been recorded in WA.

The quake on Sunday jolted items off shelves in shops and caused cracks in some buildings but no major damage has been reported, thanks to cyclone-rated construction in the region.

Beachgoers nervously watched the waves after the shock but the Bureau of Meteorology said there was no risk of a tsunami.

Derby resident Jody Gaunt was having a beer with friends when they felt the quake.

"We were sitting outside and our chairs were rocking," she told AAP.

"The trees stopped moving and the breeze stopped blowing.

"We were thinking, 'Is this real or not real?' We've never had an earthquake up here, or a tremor."

Karratha resident Mark McLaren said he felt the impact 835 kilometres to the south of Broome.

Ms Gaunt, 53, said the quake was the talk of the neighbourhood and it was reported that stock had been shaken off the shelves at the local Woolworths.

Over in Port Hedland, The Walkabout Hotel employee Shelley told AAP it felt like being on a vibrating machine.

"It felt like being on one of those vibrating machines. It just sort of shook the building," she said, adding a colleague thought it was a jet from the neighbouring international airport taking off.

Pam Walker tweeted that the rattles lasted for longer than a minute.

In Broome it went for well over a minute. Sent the animals scrambling for their hiding spots and we could see the ground literally moving outside. The pool looked like someone had jumped in it but had settled my the time I had my phone in hand. pic.twitter.com/OT54J2bJRW

Micheal Karoussis said it is unusual to experience an earthquake in Broome and he was "happy to be by the pool when it went off".

First #earthquake experience ever just now in #broome #wa #WesternAustralia
Happy to be by the pool when it went off, had the place dancing around that's for sure anyway back to the pool.... 😎🏊#shakennotstirred

"I was outside and I just saw the cars moving. It was a bit scary. You could see them moving. A few things fell off the walls onto the floors," she said.

"It just went for a few seconds."

Gary, who works at the Mercure Hotel in Broome, said it started as a little shake before the doors and walls rattled.

"It started off with a shake, it was not too crazy and then it developed into quite a shake," he told AAP, after experiencing his first earthquake.

Got a call from @BroomeSHS here is their first #earthquake. A big one too! 6.5 offshore west of Broome. Wasn't expecting that! pic.twitter.com/chz1Br2s14

"It was quite nerve-racking. We made our way outside. It was not too strong, it almost felt like when you are in a car and the wind is a bit strong, and then it started picking up."

Locals took to social media to report they had felt the earth move.

Deb Hannagan, from Broome, tweeted: "We just had an earthquake in Broome! The whole house was shaking and it went for ages. Never experienced anything like it before - quite amazing!"

We just had an earthquake in Broome! The whole house was shaking and it went for ages. Never experienced anything like it before - quite amazing!https://t.co/kQH9GWp83U

There have been no reported injuries from the earthquake, a St John Ambulance spokeswoman said.

It is also understood there has been no building damage, according to a police spokesman.