More than 3,000 migrants moved from Texas bridge by US authorities

There are reports of migrants seen back in Haiti following a concerted effort by US authorities to fly them away from a Texas bridge where a makeshift camp has been set up. 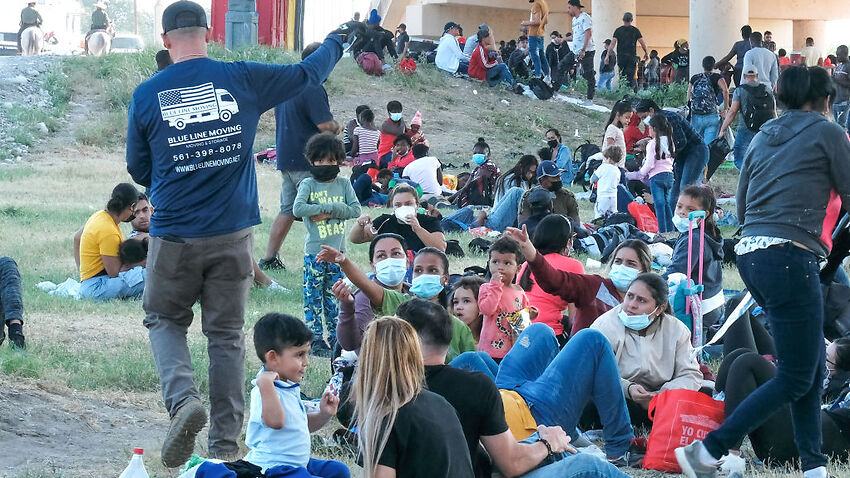 The US is ramping up deportation flights for thousands of migrants who flooded into the Texas border city of Del Rio. Source: Anadolu

US authorities have moved 3,300 migrants in the past two days from a Texas border city where thousands of mostly Haitians had gathered under a bridge after crossing the Rio Grande river from Mexico, officials said.

Some of the migrants were seen arriving later in Haiti.

"Over the next six to seven days our goal is to process the 12,662 migrants that we have underneath that bridge as quickly as we possibly can," US Border Patrol Chief Raul Ortiz said during a press conference in Del Rio, Texas.

He said the United States was working with the home countries or countries through which the migrants had transited to get them to accept those who had been awaiting immigration processing under the bridge that links Del Rio with Ciudad Acuña in Mexico.

Migrants were continuing to cross the river despite the threat of being sent back and heightened security on the US side that on Sunday included law enforcement agents on horseback, one of whom was seen swinging a rope at a person wading in the Rio Grande.

US authorities will ramp up deportation flights for thousands of migrants as authorities scramble to alleviate a burgeoning crisis. Source: AFP

Officials on both sides of the border said most of the migrants were from Haiti.

Many of the Haitians Reuters spoke to said they had been in South America before heading north more recently because they could not attain legal status or struggled with racism and securing decent jobs.

Earlier on Sunday Reuters journalists saw a white bus escorted by US Customs and Border Protection agents enter the Del Rio airport, then a group boarding a Coast Guard plane.

A police source said the people were migrants and a source familiar with airport operations said the aircraft was heading to El Paso, Texas.

Meanwhile, Tom Cartwright of the advocacy group Witness at the Border who tracks US Immigration and Customs Enforcement flights, told Reuters three flights left Texas - one from Laredo and two from San Antonio - on Sunday carrying Haitians to Haiti.

Alejandro Mayorkas, secretary of the Department of Homeland Security said during another news conference that expulsion flights to Haiti that started on Sunday will continue daily.

He said he could not detail the number of flights or number of Haitians for security reasons.

The Department of Homeland Security announced on Saturday that it was accelerating expulsions to Haiti, sending more Customs and Border Protection agents to the area and taking other steps to address the situation in Del Rio, where conditions under the bridge have grown increasingly squalid.

After US law enforcement on Sunday told Haitians that they could no longer go back and forth to Mexico for supplies at the shallow crossing point they had used in earlier days, the migrants flocked to a different stretch of the river.

For hours, hundreds of migrants crossed from the United States into Mexico, with some telling Reuters they needed food and water for their families because there were few supplies at the encampment below the bridge.

Around midday, mounted officers, some wearing vests emblazoned with the words "police US border patrol", galloped to block the path of migrants scrambled up the US bank carrying plastic bags and cardboard boxes of food.

One officer swung a rope like a lasso close to the face of a migrant in the water, Reuters images showed.

The US officers then strung yellow tape across that section of the bank.

Migrants proceeded to cross at a deeper point.

Mr Cartwright, of Witness at the Border, raised concerns about returning the migrants to Haiti.

In July, the impoverished nation's president was assassinated, and in August a major earthquake and powerful storm hit the country.

COVID-19 is also cause for worry, Mr Cartwright said.

"Haiti before the earthquake did not have a robust health system," he said.

"And the fact that we're sending people back, particularly if they haven't been tested and haven't tested negative, would be a serious concern."

Read More
Thousands of migrants wait for asylum at US border

Mr Mayorkas told reporters the Haitian government has "communicated quite clearly to us its ability to receive the flights" and said the US government is providing funding to Haiti to help. He did not specify the amount.

A sweeping US Centers for Disease Control and Prevention public health order known as Title 42, issued under the Trump administration at the beginning of the coronavirus pandemic, allows most migrants to be quickly expelled without a chance of claiming asylum.

President Joe Biden has kept that rule in place though he exempted unaccompanied minors and his administration has not been expelling most families.

Mr Biden had promised a more humane immigration approach than that of his predecessor Donald Trump.

A judge ruled Thursday the policy could not be applied to families, but the ruling does not go into effect for two weeks and the Biden administration has appealed.

Typically, migrants can turn themselves in at the border and claim asylum, triggering a long court process.

The Trump administration whittled away at protections, arguing many asylum claims were false.