Jihadist-linked unrest has killed more than 2000 people in Mozambique and displaced 400,000 more since 2017. 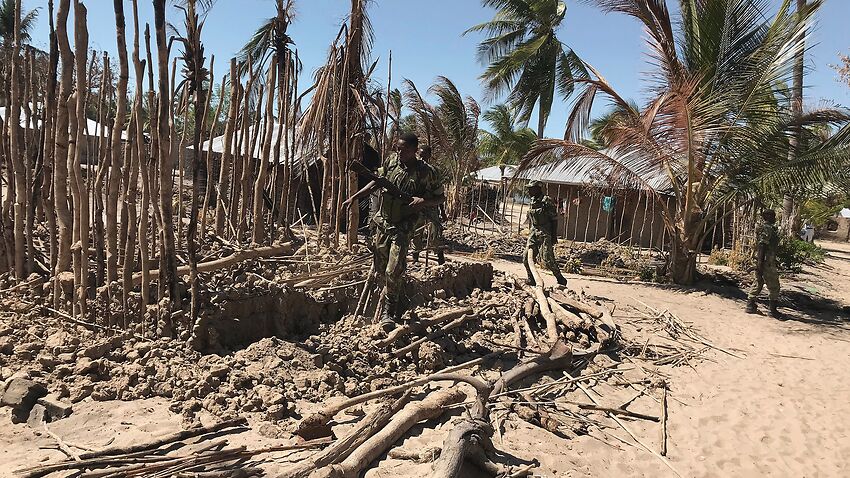 Mozambique's north has been the target of a jihadist force since October 2017. Source: AFP

Suspected militants beheaded more than 50 men and teenagers participating in a male initiation ceremony in Mozambique, local media says, in the latest violent incident in the insurgency-hit northeast.

The dismembered bodies were found on Monday, scattered across a forest clearing in Muidumbe district.

Islamist militants operating in the area had attacked several nearby villages over the weekend, looting and burning down homes before retreating into surrounding thicket.

"Police learnt of the massacre committed by the insurgents through reports of people who found corpses in the woods," said an officer in the neighbouring Mueda district who asked not to be named.

"It was possible to count 20 bodies spread over an area of about 500 metres," he added.

"These were young people who were at an initiation rite ceremony accompanied by their advisers."

Displaced Mozambicans pictured in 2018 after attacks by a jihadist force known as Al-Shabab. The group has no known links to Al-Shabab in Somalia. Source: AFP

An aid worker in Mueda, who also declined to be named, confirmed the massacre had taken place, saying some of the boys had come from that area.

She said body parts had been sent to their families for burial on Tuesday.

"Funerals were held in an environment of great pain," said the worker.

"The bodies were already decomposing and couldn't be shown to those present."

Mozambican authorities have not yet commented on the deaths, and provincial police did not respond to calls from AFP.

Jihadists have caused havoc in Mozambique's northeastern Cabo Delgado province over the past three years, ravaging villages and towns as part of a campaign to establish an Islamist caliphate.

The militants have stepped up their offensive in recent months and violently seized swathes of territory, terrorising citizens in the process.

Mozambican Army speak with locals after a jihadist attack in 2018. Source: AFP

In April, jihadists shot dead and beheaded more than 50 youths for allegedly refusing to join their ranks.

The unrest has killed more than 2000 people since 2017, more than half of them civilians, according to the US-based Armed Conflict Location & Event Data group.

More than 400,000 others have been displaced by the conflict and sought refuge in nearby towns and cities.

Around 10,000 people fled to the provincial capital Pemba via boat over the past week alone, Doctors Without Borders said Tuesday, raising concerns over access to clean water and sanitation.

Little is known about Mozambique's jihadists, who call themselves Al-Shabab - although they have no known links to the group of that name operating in Somalia.