It was painted by the nephew of former prime minister Kevin Rudd. 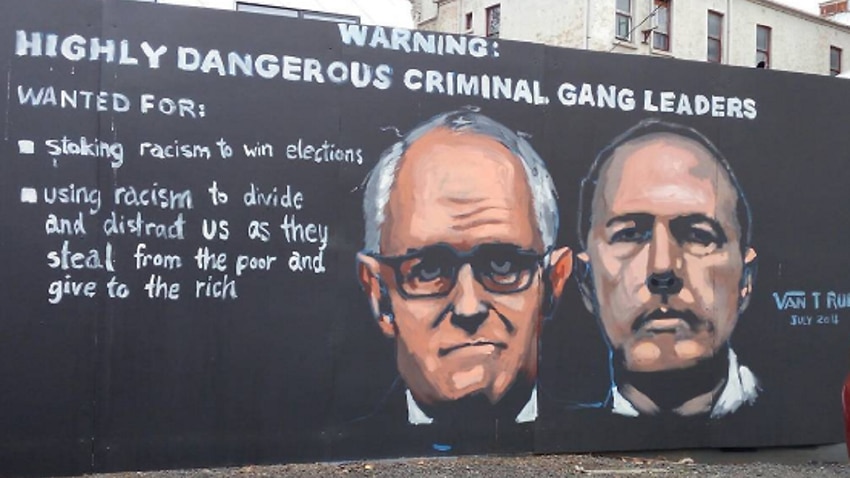 A photo of the Kensington mural. Source: Instagram - van_t_rudd

The mural, by street artist Van T Rudd, accuses the pair of "stoking racism to win elections" and "using racism to divide and distract us as they steal from the poor and give to the rich".

Mr Rudd is the nephew of former prime minister Kevin Rudd and has painted several other controversial murals, including a bulldog urinating on Senator Pauline Hanson.

In an interview with SBS News, he said the Australian government was using the "so-called African gang crisis" as an "election ploy".

"I thought, here we go again... Another group of migrants or refugees who came to this country are being used for political purposes," he said.

"They're just trying to get votes."

Mr Rudd added that "a very important part of my argument in the mural" is politicians are "behaving like organised criminals, giving big-time free kicks to the rich such as tax breaks and giving the nod to blatant company tax evasion".

He said he expected the mural to be taken down "in the next two or three days".

"Currently, it's such a hostile environment for street art that's political," he said.

The artwork comes as a number of crimes involving Australians of African heritage over the past year has triggered debate over whether or not there is a crisis with so-called "African gangs" in Melbourne.

During a recent visit to the city, Mr Turnbull said "there is a gang issue here and you are not going to make it go away by pretending it doesn't exist".

"Absolutely there's some problems we have to tackle, but we also have to be aware of what happens as a result of over-exaggerating, and targeting them and tarnishing a whole community," he said.

"[Australians of African heritage] feel they are excluded from lots of things because of this feeling that everyone is looking at them thinking they're a gang and out to assault [people]. Nothing could be further from the truth."