The grieving family and friends of an Aboriginal man who died after being shot by a Northern Territory police officer have pleaded to keep court proceedings in Alice Springs, rather than 1,400km away in Darwin. On Thursday, they'll find out if they have been successful. 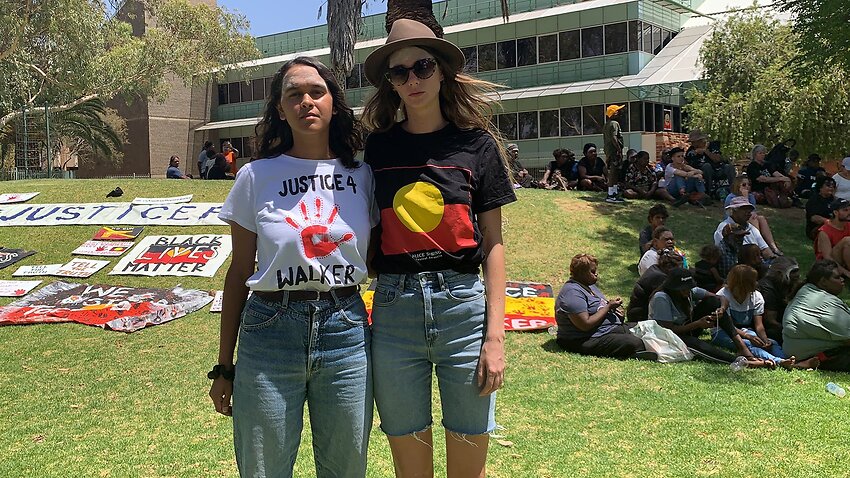 The family and friends of an Aboriginal man who died after being shot by a Northern Territory police officer say the court case is part of the community's "healing" and moving proceedings from Alice Springs to Darwin will put a financial strain on them.

Lawyers for constable Zachary Rolfe, charged with the alleged murder of 19-year-old Warlpiri man Kumanjayi Walker, say the case must be moved to ensure a fair trial.

Members of the Warlpiri community and surrounding communities last week travelled close to five hours to Alice Springs from the small central desert town of Yuendumu, where his death occurred last month, so they could support the Walker family during court proceedings.

Gathered on the shaded lawns of the Alice Springs Local Court they questioned the application to move the case.

"It happened out here," said a voice from the crowd.

"We got no money to travel to Darwin," said another.

Mr Walker's cousin Samara Fernandez-Brown said it was crucial for grieving family members to be a part of the court process.

"It restricts us, the Warlpiri from being part of the court process," she told SBS News.

"This case for our family is about healing and part of that is being part of the process, by moving the case to Darwin it restricts us from healing."

Members of the community sat in silence during last week's court proceedings, with white face paint on their foreheads as a symbol of peace, while waiting for a decision.

Ms Fernandez-Brown said the process had already put a huge financial burden on the community, which was struggling as it was to bring people from Yuendumu to Alice Springs.

While it is a five-hour drive from Yuendumu to Alice Springs, it takes about 16 hours of driving to get to Darwin.

Yuendumu community members have called for the hearing to remain in the central desert. Source: NITV News

"We're not working at the moment, because this is our full-time job," Ms Fernandez Brown said.

"It's already such a terrible time for us and this seems to be a bit unjust."

A fundraising page set up to help pay for lawyers to travel to Yuendumu, and for external costs such as airfares and accommodation, has raised more than $100,000.

Ms Fernandez-Brown said that while the donations have helped, they won't be enough to send people to Darwin if the decision is made to move the case.

"It costs so much money that we don't really have. We're really relying on the generosity of strangers at the moment," she said.

"It's really frustrating when we've been compliant and very peaceful."

"Court is open to the public and the Yuendumu community want to be able to attend the court hearings, we don't want to be left out," she said.

"We want the court proceedings to stay in Alice Springs, we don't have any vehicles to go up there, no money, we just want justice and peace."

"We've had a lot of support from people from across the country, one mob, one voice," he said.

"We just want to see justice in our country, and we want to do it in a peaceful way."

He said the "premature charging" of his client had "generated unprecedented misinformation" in the public domain.

"It is this misinformation which has generated so much anger and division most acutely in the local community of Alice Springs and at times the violent and public response has been palpable," he said.

Mr Edwardson said the description of the shooting of Mr Walker on 9 November "bears little resemblance to the print, electronic and social media reports" that have since circulated.

"Mr Walker resorted to violent and potentially lethal force against two police officers who were doing no more than performing their lawful duty," he said.

"Constable Rolfe was acting in good faith when he discharged his firearm."

Mr Edwardson said the application to move proceedings to Darwin was to ensure a "fair trial".

"This unprecedented volatile public response focuses very much on Alice Springs and accordingly is highly prejudicial to the fair trial of the accused, not to mention the security of anyone connected to the trial."

A decision on the location has been reserved until Thursday when the courts will also consider Mr Rolfe's bail and a request from the prosecution for an extended three-month period to prepare evidence.

Share
Published 19 December 2019 at 6:06am
By Aneeta Bhole
Topics
Australia