After a dramatic increase in religiously-motivated incidents and Islamophobic comments from politicians, Muslim women in Austria tell SBS News they are fearful.

With her uncovered black hair, jeans and nose piercing, Tuba displays no outward sign of her faith.

But the 30-year-old Austrian-born Muslim, who wishes to remain anonymous, is still visibly distraught after an incident at her local supermarket last month.

She and her Turkish-born mother, who wears a headscarf, were verbally abused, then physically threatened.

“My mother and I were in a crowded aisle, speaking Turkish, when a woman and her son began to insult us and scream at us to get out of their way,” says Tuba, who lives near the Lower Austrian town of St Pölten, some 65km from Vienna. 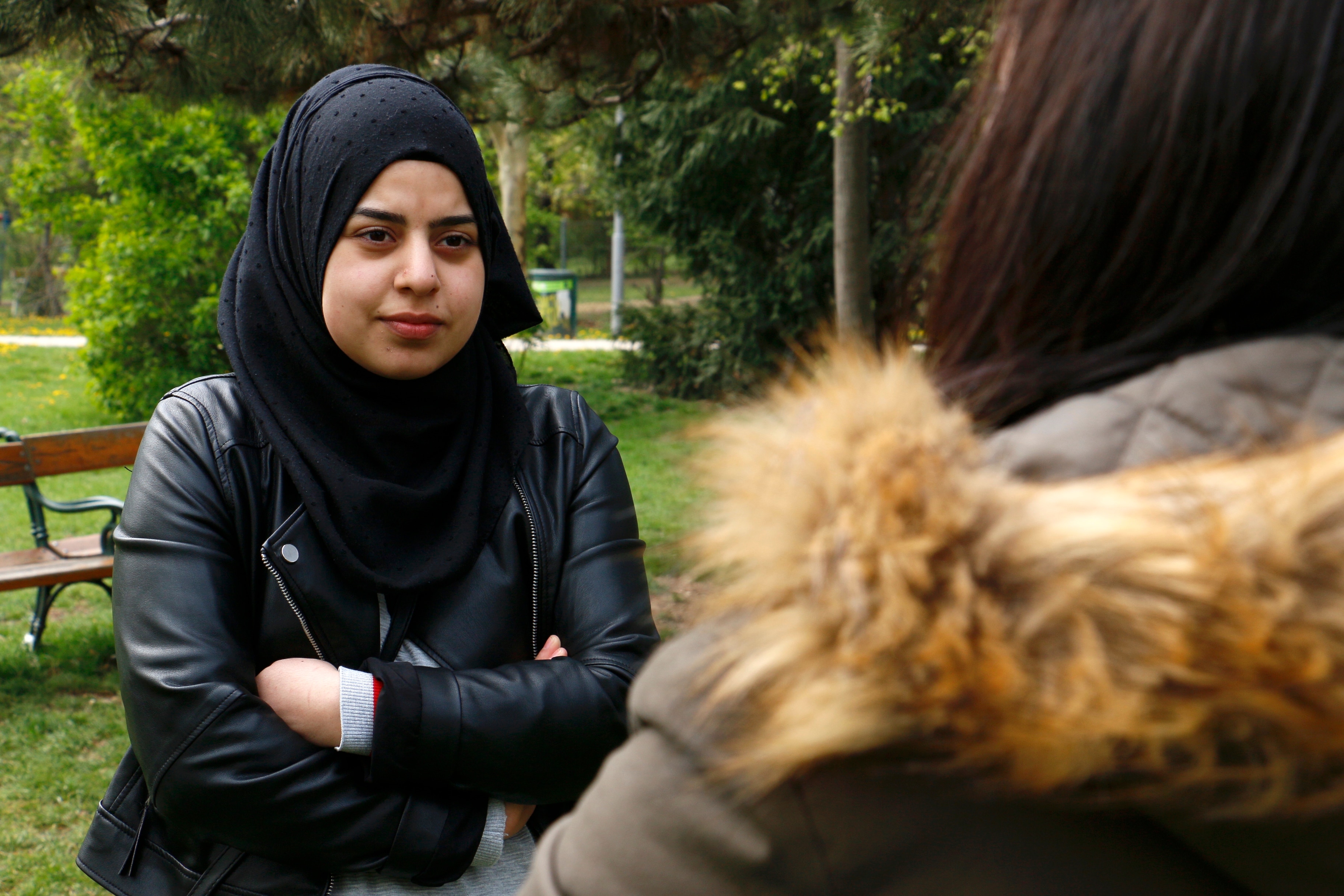 Tuba, right, who was attacked and does not want to be identified, speaks with her younger sister Elif.
Kim Traill

“She grabbed me around my neck in a chokehold, right at the checkout,” says Tuba, her distress at the memory still fresh. “I was completely shocked, and so was my mother. I took out my phone and called the police.”

From that point, Tuba - who describes herself as “a strong woman” - filmed the pair continuing to hurl abuse at her and her mother as they walked into the carpark.

“She called us ‘wogs’, ‘arseholes’, ‘worms’ and ‘subhumans’ - and shouted that we should go back to our homeland. But Austria is my homeland. I’ve lived here my whole life. My father was brought here from Turkey to rebuild the country after World War Two.”

She called us ‘wogs’, ‘arseholes’, ‘worms’ and ‘subhumans’ - and shouted that we should go back to our homeland.

When the police arrived, Tuba was shaken but she was informed that unless she was physically injured, they could do nothing and the “case was closed”.

Her younger sister, Elif, a 19-year-old business college student, suggested they contact a Vienna-based organisation - the Documentation and Consultancy Centre for Islamophobia and Anti-Muslim Racism.

On the centre’s advice, Tuba returned to the police to file a complaint. But one month on, she finds herself deeply frustrated by the lack of official response. Her mother is suffering panic attacks, is on medication and is afraid to leave the house.

Tuba is one of hundreds of Austria’s 600,000 Muslims who have reported religiously-motivated hostility to the centre over the past year. Of these, 83 per cent affected women, 46 per cent involved online hate speech (including intimidation, calling for violence against Muslims or comparing them to animals), 17 per cent were reports of hate graffiti (expressions such as “Muslim rats”, “Muslims out”, “F*** Muslims” sprayed in public places), and 14 per cent were verbal attacks and insults, occurring everywhere from hospitals, shopping centres, parks, swimming pools and on public transport.

Women had been spat on, abused while with their young children and called everything from “whores” to “Untermensch”, a banned Nazi-era term meaning “subhuman”. One headscarf-wearing tutor was told by a student that he knew people “who thought it would be better if all Muslims were dead”.

Muslim women have been spat on, abused while with their young children and called 'whores'. A demonstration against racism, Islamophobia and far right policies in Vienna in March.
Anadolu/Getty Images

According to report author, Elif Adam, the figure represents only a fraction of the actual number of cases.

Relatively few of Austria’s Muslims - who make up seven per cent of the country’s population - know of her organisation, Ms Adam says. Often she hears that people simply want to forget their negative experiences and prefer to avoid reliving the incident. And many police says Ms Adam, like those who responded to Tuba’s call, are unaware hate speech and verbal abuse without physical harm are even reportable offences.

Islamophobia has risen steadily since the European “refugee crisis” of the summer of 2015, which saw 90,000 predominantly Muslim refugees from Syria, Afghanistan and Iraq apply for asylum in Austria. The initially euphoric welcome soured quickly as right-wing politicians and media portrayed the arrivals as both potential “terrorists” and “economic migrants seeking to benefit from Austria’s welfare system”. 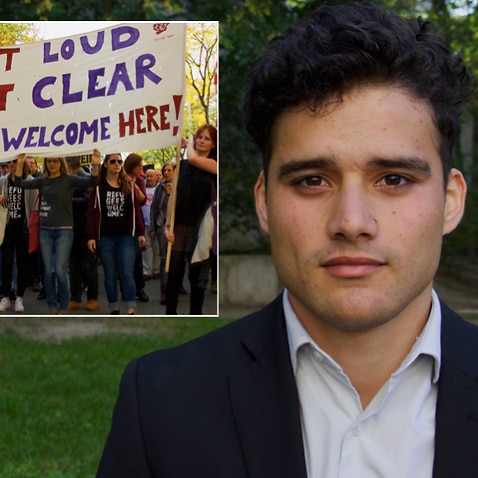 The country that has overturned its promise to refugees

For Austria’s significant Muslim minority, the presence of a party in government whose campaign slogans have included “Islamisation must be stopped” and “Islam does not belong to Austria”, has led to what Ms Adam describes as a “toxic” atmosphere in the country. 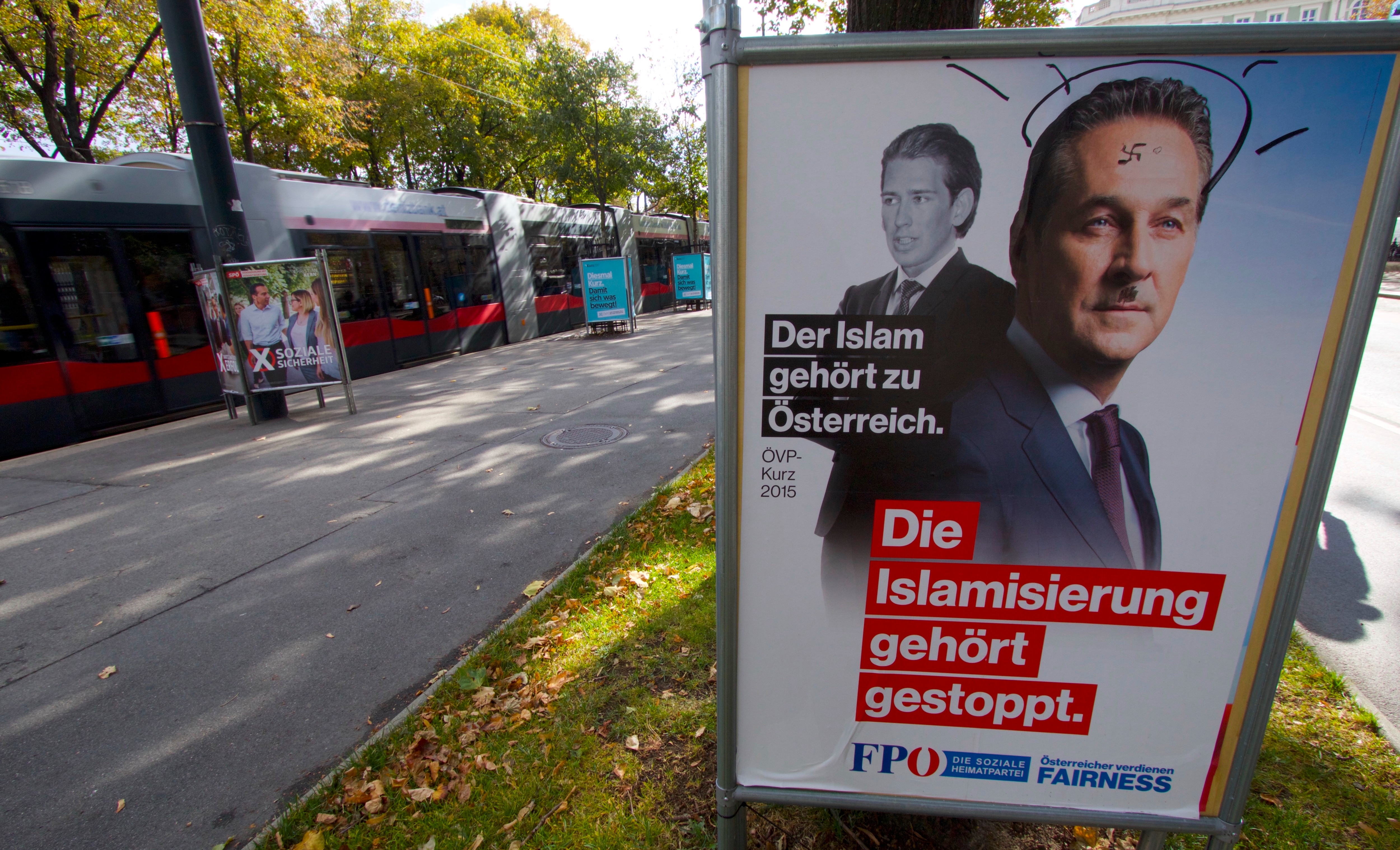 With the Freedom Party’s hardline “Austria for Austrians” attitudes pushing the political agenda, debates have been raging over headscarf bans, including in schools and kindergartens, as well as the closure of certain mosques and Islamic kindergartens.

“There is constant negative rhetoric by politicians and media targeting Muslims, depicting them as ‘integration-resistant’, ‘violent’ or as ‘unwilling to accept the constitution’, and this, of course, affects public opinion and results in random attacks against Muslims,” says Ms Adam. 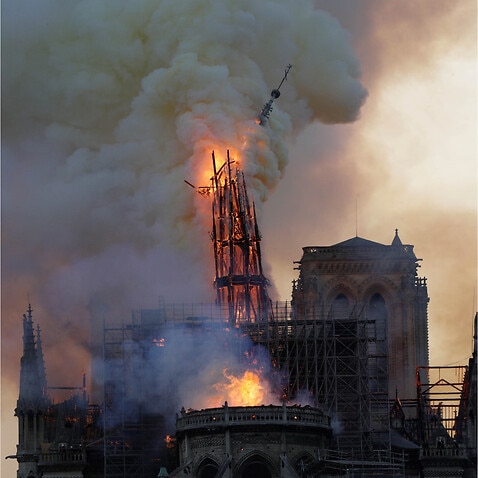 An issue of major concern to Ms Adam is that “politicians frequently interchange the terms Islamic and Islamist”, failing to distinguish between Islam as a religion and Islamist as an extremist ideology. This, she says, is “very dangerous” when “both politicians and the public cannot differentiate between the two.”

Politicians frequently interchange the terms Islamic and Islamist ... the public cannot differentiate between the two.

She observes that “the same words and narratives used by politicians are being used by those attacking Muslims on the street: insulting a person, calling them a ‘terrorist’, an ‘Islamist’, telling them to ‘go back to their country’.” Muslims at a market in Favoriten, Vienna.
Kim Traill

Ms Adam - who was born and raised in Germany and has lived in Austria for a decade - is also disturbed by what she calls the “otherness narrative”. Despite the overwhelming majority of Austrian Muslims being born in the country, the government “describes them as belonging somewhere else”, she says.

Last month’s revelation that the Australian man charged with the massacre of 50 Muslims in a Christchurch mosque had donated around 1,500 euros (AU$2,355) to an Austrian-led international “neo-fascist” organisation called the Identitäre Bewegung (Generation Identity), triggered a panicked reaction from Austrian authorities.

Past actions by the group include storming a university theatre performance by Muslim refugees, spraying fake blood from the roof of the Green Party headquarters and chartering a boat in the Mediterranean to intercept asylum seekers. 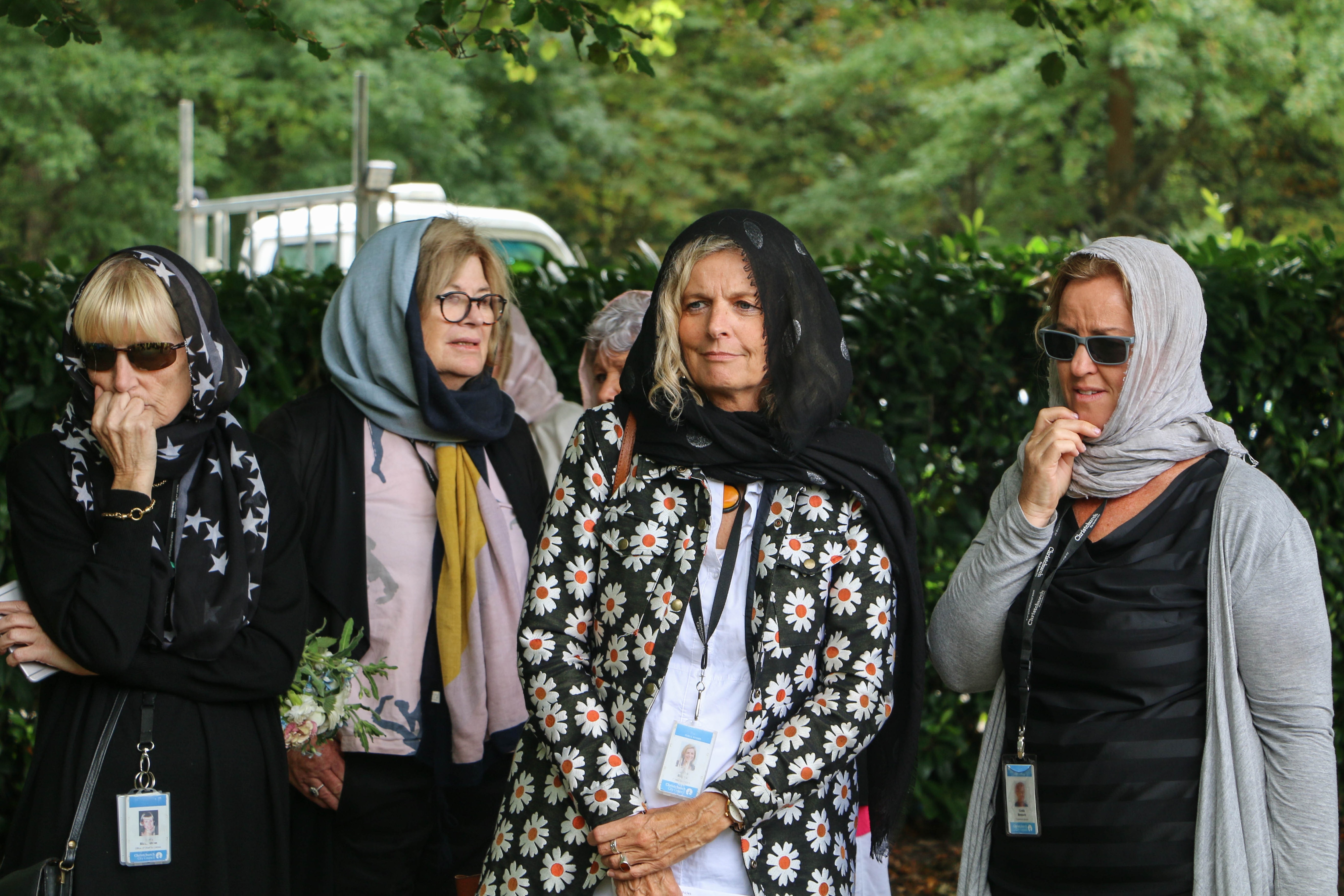 One of Generation Identity’s slogans: “The Great Exchange” - a Nazi-era term referring to the demographic replacement it claims is happening in Europe - was also used by the Christchurch killer in his manifesto.

In November 2018 he visited Austria and highlighted the country as one of the places where the “resistance” could begin. He also made repeated and chilling references to Turks, who make up the majority of Austria’s Muslim population. Scott Morrison says he wanted to 'address fears on Islam, not exploit them', in tense interview

Particularly worrying to Ms Adam are the links between the radical right Generation Identity and the Freedom Party, whose leader, Heinz Christian Strache, is Austria’s vice-chancellor. In the past week, authorities conducted house searches on  Generation Identity members, discovering donor lists which include active FPÖ members.

Mr Strache would not say how many members of his party had links to Generation Identity. Nor did he condemn those connections, telling media that “who people donate money to as private persons is their own business and they won’t be punished.”

Many Austrian Muslims are now fearful a Christchurch-type attack could also happen in their home country.

“People have become more sensitised and emotionally affected by hate crimes since Christchurch,” Ms Adam says. “They tell me they are becoming anxious at Friday prayers and constantly checking behind them to see who is coming and going.”

Austrian Chancellor Sebastian Kurz mentioned anti-Muslim racism in Austria for the first time last week, in response to an attack on a 25-year-old woman wearing a headscarf who was spat on and abused at a Vienna tram stop. The Austrian-born designer was on her way to the gym and filmed the attack on her phone, the images of a woman screaming “the Freedom Party will throw you all out” and calling her a “whore”, “swine” and a “dog” quickly went viral on social media.

“A sickening attack, which I condemn in the strongest possible terms,” Mr Kurz tweeted.

“Is he only just realising we have a problem with anti-Muslim racism in Austria, or does he just need to create an image that he is condemning it, but still not doing anything?” Ms Adam says. 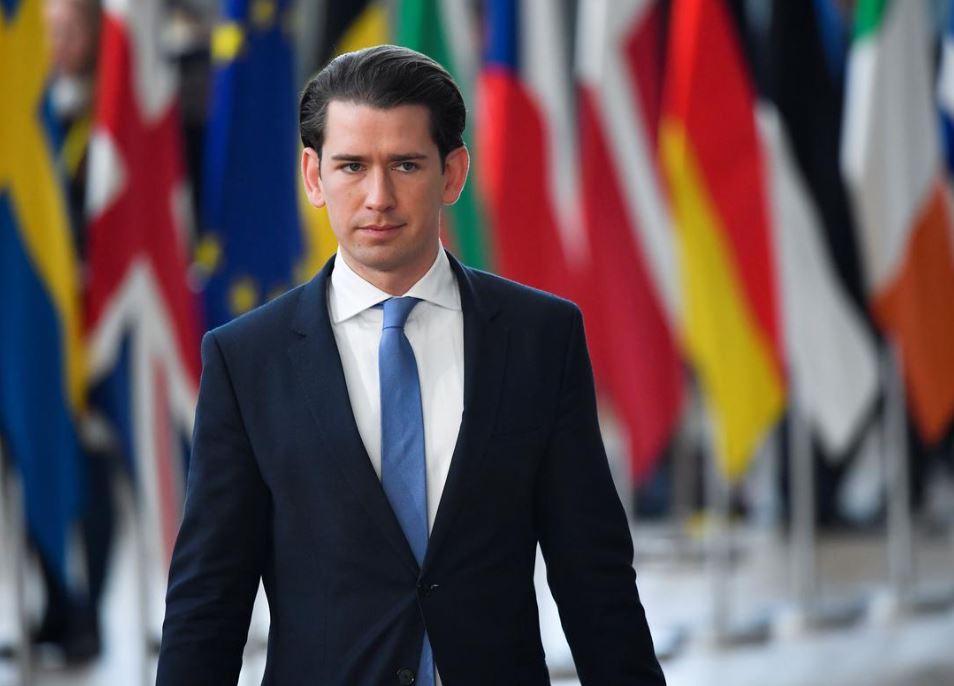 But, she adds, the people who voted this government in also bear some responsibility for the situation.

“You see who got lots of votes in the last election and what their rhetoric was. You can’t just condemn the politicians, it’s also the population, but I think the task of the government should be to ensure safety and peace amongst the Austrian population. Instead, they are dividing it.” 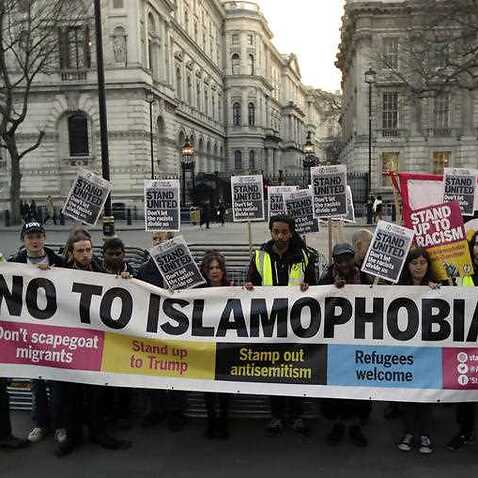 Tuba’s younger sister, Elif, has chosen to wear a headscarf. Since the incident with her family, she is constantly anxious.

“I go to school here and now I always have in the back of my mind that someone is going to attack me or say something,” Elif says. “But I am not going to leave my country because of this. I live in Austria, Austria is my home.”

Ms Adam has nothing but praise for New Zealand Prime Minister Jacinda Adern’s handling of the Christchurch tragedy last month.

“Racism is splitting the population, and what she did was to people back together. And this is what we need. Everywhere.”