Human rights groups say Myanmar's military involvement in the deaths of 10 Rohingya Muslims is just the tip of the iceberg. 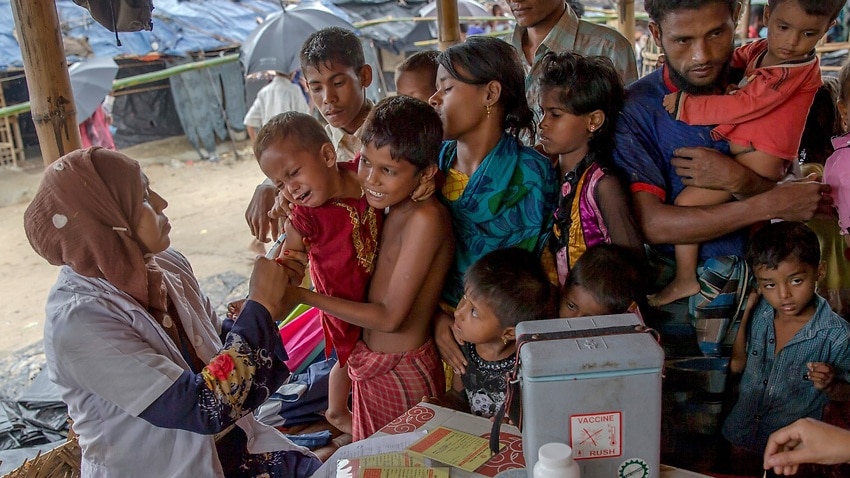 In this Sept. 17, 2017, a Bangladeshi health worker injects vaccine to a Rohingya Muslim boy, who crossed over from Myanmar into Bangladesh Source: AAP

Myanmar's military involvement in the deaths of 10 Rohingya Muslims in northern Rakhine State, admitted to by the commander in chief, is just a fraction of the abuses for which security forces are culpable, rights groups say.

Fortify Rights, Amnesty International, and Human Rights Watch have described the admission that ethnic Rakhine villagers and security forces killed 10 Royingya Muslims in Inn Dinn village on September 2 last year as the "tip of the iceberg," and want an international investigation.

Matthew Smith, co-founder and chief executive officer of Fortify Rights, says the group has documented similar atrocities across northern Rakhine State, where a military crackdown prompted by Rohingya militant attacks has driven more than 650,000 Rohingya to flee the country.

"Massacres and mass graves have been a reality in all three townships in the north," he told dpa.

Amnesty International had documented "overwhelming evidence" in villages across the area that the "military has murdered and raped Rohingya, and burned their villages to the ground," James Gomez, Amnesty International's Regional Director for Southeast Asia and the Pacific, said in a statement released Wednesday.

Phil Robertson, deputy Asia director of Human Rights Watch, urged the Myanmar government to "get serious about accountability by allowing the UN appointed Fact Finding Commission to enter the country," in an email to dpa.

The military's statement on Wednesday said the 10 Rohingya men were captured on September 1 when some 200 militants attacked security forces in Inn Dinn and interrogated by the military, before being killed the next day.