Myanmar's military has seized power in a coup against the democratically-elected government of Nobel laureate Aung San Suu Kyi. 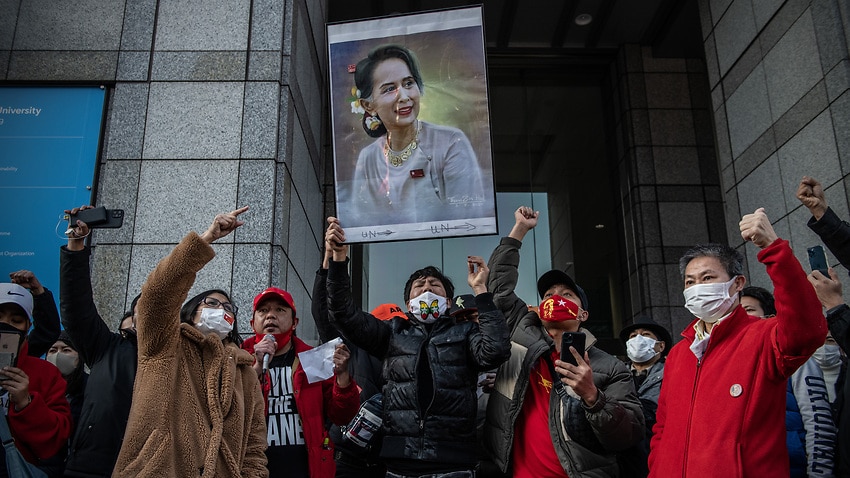 A poster of Aung San Suu Kyi is held aloft as Myanmarese people in Tokyo demonstrate against the coup that took place in their home country on 1 February. Source: Getty Images AsiaPac

A verified Facebook account from Myanmar's National League for Democracy (NLD) party has published a statement on behalf of detained leader Aung San Suu Kyi, saying that people should not accept a military coup and should protest.

The NLD said the statement, which was uploaded on a Facebook page used by the party during its election campaign, was written before Monday's coup had taken place. Reuters could not immediately reach NLD party officials for comment.

Suu Kyi has not been seen in public since she was detained in early morning raids along with other key party figures and activists.

Myanmar's military declared it had taken control of the country for one year under a state of emergency.

"The actions of the military are actions to put the country back under a dictatorship," said the statement, which carried leader Suu Kyi's name but not her signature.

"I urge people not to accept this, to respond and wholeheartedly to protest against the coup by the military."

The statement was issued by the party chairman Win Htein, who in a handwritten note at the bottom stressed it was authentic and reflected Suu Kyi's wishes.

"On my life I swear, that this request to the people is Aung San Suu Kyi's genuine statement," wrote Win Htein, who could not be reached by Reuters.

A handout photo made available by the International Court of Justice shows Aung San Suu Kyi appearing before the ICJ in 2019. Source: UN PHOTO

The intervention came after weeks of rising tensions between the military, which ruled the country for nearly five decades, and the civilian government over allegations of fraud in November's elections.

The military last week signalled it could seize power to settle its claims of irregularities in the polls, which Suu Kyi's NLD party won easily.

NLD spokesman Myo Nyunt told Reuters by phone that Suu Kyi, President Win Myint and other leaders had been “taken” in the early hours of the morning.

“I want to tell our people not to respond rashly and I want them to act according to the law,” he said, adding he also expected to be detained.

The military then declared, via its own television channel, a one-year state of emergency.

Phone lines to Naypyitaw, the capital, were not reachable in the early hours of Monday. Parliament had been due to start sitting there on Monday after a November election the NLD had won in a landslide.

All Myanmar banks across the country were closed on Monday due to a poor internet connection while state-run MRTV television said in a Facebook post that it was unable to broadcast due to technical issues.

"We call on the military to respect the rule of law, to resolve disputes through lawful mechanisms and to release immediately all civilian leaders and others who have been detained unlawfully," Ms Payne said in a statement.

"We strongly support the peaceful reconvening of the National Assembly, consistent with the results of the November 2020 general election."

FM @MarisePayne: "We are deeply concerned about the events in Myanmar today - a good friend of Australia, an important member of our very close neighbours in ASEAN - and a country which has been on an important democratic transition for over a decade now." @SBSNews #auspol pic.twitter.com/mcKBOIS2pC

"This is a direct attack on Myanmar’s ongoing democratic transition," she said in a tweet.

"We look to the Australian Government to make clear our expectations that democratic norms are respected and strengthened," she said.

Labor condemns the detention of numerous political and civil society figures in Myanmar. This is a direct attack on Myanmar’s ongoing democratic transition.

We look to the Australian Government to make clear our expectations that democratic norms are respected and strengthened.

Asked about the situation in Myanmar at the National Press Club on Monday, Prime Minister Scott Morrison described the developments as "disappointing" and said Australia had, alongside other nations including Canada, the UK, the US, New Zealand and some EU countries, issued a statement on Friday opposing efforts to to alter the election outcome and urging the military and all parties to adhere to democratic norms.

The country continued to face many challenges as it attempted to shape its future, he added.

"We all hope for Myanmar. We all hope for what I know the Myanmar people want to achieve. I found them the most beautiful of people when I was there, so peaceful in nature but having suffered such terrible violence over the course of their nation’s history."

Other countries have also condemned the military's overnight raids.

"We call on Burmese military leaders to release all government officials and civil society leaders and respect the will of the people of Burma as expressed in democratic elections on November 8," Mr Blinken said.

"The United States stands with the people of Burma in their aspirations for democracy, freedom, peace, and development. The military must reverse these actions immediately."

Japanese Chief Cabinet Secretary Katsunobu Kato called on the parties concerned "to resolve the issue peacefully through dialogue in accordance with the democratic process".

Myanmar's easter neighbour China on Monday called for all parties to "resolve their differences" to "protect political and social stability".

Myanmar is a vital piece of China's Belt and Road Initiative - Chinese President Xi Jinping's $US1 trillion ($A1.3 trillion) vision for maritime, rail and road projects across Asia, Africa and Europe - including a proposed $8.9 billion ($A11.6 billion) high-speed rail link from southern Yunnan province to Myanmar's west coast.

Tensions were ramped up last Tuesday when a military spokesman refused to rule out the possibility of a coup following claims of widespread irregularities that led to Suu Kyi's landslide election win.

His comments - translated into English and published in the army-run Myawady newspaper - sent shockwaves through the nascent democracy, which is only a decade out of the grips of a 49-year military dictatorship.

On Saturday the army released a statement claiming its commander-in-chief had been misunderstood, though the statement did not directly address fears of an imminent coup.

"Some organisations and media defined the speech of the Commander-in-Chief as they liked... without respecting the full text of the speech," said an English translation of the statement.

"The Tatmadaw is abiding by the constitution... (and) will perform its tasks within the frame of enacted law while safeguarding it," it added, referring to the army by its official Burmese name.

Fears swirl in Myanmar about a possible coup by the military over electoral fraud concerns. Source: AFP

Suu Kyi remains an immensely popular figure in Myanmar despite her international reputation being deeply tarnished over a crackdown on the country's stateless Rohingya minority in 2017.

Myanmar has been ruled by military regimes for most of its history since independence from former colonial power Britain in 1948.

General Ne Win ousted a civilian administration in 1962, saying it was not competent enough to govern.

He ran the country for the next 26 years but stepped down in 1988 after huge nationwide protests against economic stagnation and authoritarian rule.

A new generation of military leaders headed took command a few weeks later, citing the need to restore law and order in the country.

Junta leader General Than Shwe stepped down in 2011, handing over power to a government of retired generals after adopting the country's current constitution.

Will the constitution stand?

The 2008 constitution carves out a powerful ongoing political role for the military, giving them control of the key interior, border and defence ministries.

Any changes need the support of military lawmakers, who control a quarter of seats in the country's parliament.

Its guarantee of military power makes the constitution a "deeply unpopular" document, according to Yangon-based political analyst Khin Zaw Win.

Suu Kyi and her government have been trying to amend the charter since winning the 2015 election, with little success.

During the last term she circumvented a rule that prevented her from assuming the presidency by taking the de facto leadership role of "state counsellor".

This loophole is one of several the military did not foresee, political analyst Soe Myint Aung said.

"From their perspective, it has lost significant control over the political process," he told AFP.